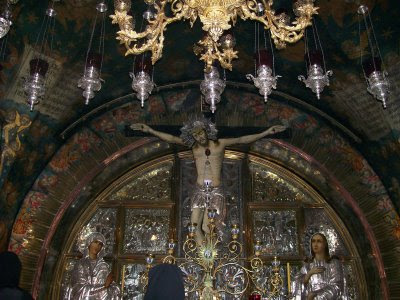 It’s been something of a crazy week. Of course churches keep a crazy schedule this week, but that’s not really what I’m talking about. Like every Holy Week, it’s been a kind of emotional rollercoaster.

I imagine this service must be something like what it was like on that day in Jerusalem so long ago. After the crowd lost the energy of the moment that spurred them on in the trial, after the beatings and abuse, after the humiliating walk to Golgotha, after the hammering of the nails through flesh and into wood and hoisting the cross and its cargo into position… After all of that, there must have been at least a moment. Perhaps some of the crowd grew bored of the spectacle. Perhaps the spectacle began to die. After all of this, there must have been some moment when quiet intruded on agony. There must have been some moment for reflection, even if those present couldn’t really know what they were reflecting upon.

I’m a faithful listener of Writer’s Almanac. I don’t catch every episode, but I always find that whenever I do, something in my soul gets fed in an unexpected way.

Earlier this week, while driving home from a Tenebrae service, I happened to accidentally stumble across Writer’s Almanac once again when I heard this poem. It struck me how much this picture of birth is similar to the picture we paint in our annual reliving of the life, death, and resurrection of Jesus.

Birth and death really aren’t that different. They stand together as some of the messiest and most mysterious moments of our lives. Of course, scientists have done amazing work explaining the processes of both to us, but they never can really get at the biggest question around these most significant life transitions – “why?”

Like the cold, wet, messy story of the birth of a calf, the story of Jesus’ death on the Cross was simply the truth of life. Neither good nor bad in its own merit. Just truth.

Theologians, like scientists, have tried to answer that persistent question – “Why did he have to die?”

More recently theologians and social theorists have begun to examine the crucifixion and death of Jesus as a kind of self-fulfilling prophecy. As one who challenged the prevailing authorities of his day, Jesus (not surprisingly) encountered resistance. When he refused to back down in the face of that resistance, the social powers began to fear him, and in a predictable reaction, that fear drove them to murder.

But our job here today is not to figure out the answer to that persistent question – why? The “why” can wait. In the weeks and months and years that stretch out before us we can start to tackle that one. Like his friends who were left behind, we, too, who are left behind will have time enough to wrestle with “why”.

Today we are not scientists or theologians. Today we let the questions rest.

And when the time was right, our Jesus would become Christ. He would slough off the weight of this world in a messy and lonely journey to all that would lie ahead. “It is finished,” yes. But it’s only beginning.

In awe and wonder at the mystery and the holiness, we wait. And we watch. And like a poet, we take it in, as much as we can, because there will be time enough for the “whys”.
sermons; other