The Great Vigil of Easter 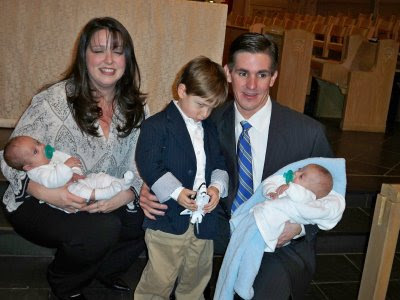 A few months ago I had the good pleasure of going home to be with my family in Mississippi to celebrate the baptisms of my two youngest nephews – twins who are now seven months old. My oldest nephew, Brooks (who is now four and a half years old), watched all of the events of the day with great interest – but, in that way that young children often do: he never let go of his space shuttle that he had brought with him to play with during church. Even when he was standing around the font with his parents and his brothers and their Godparents he continued playing with his toy, flying it through the air, landing it on the font, launching it from the floor. You might have assumed that he was off in another world, but he was there – surreptitiously taking it all in.

Later that afternoon, while our family was gathered for a festive lunch to celebrate the baptisms, Brooks took a break from playing with his cousins and he came over to sit next to me and join me in admiring his two brothers. We were playing with them, with them each in their little seats, when Brooks began steering the conversation to the worship service that we had attended just before.

Brooks is no stranger to church. He and his family are faithful attendees of their parish is Jackson, Mississippi. But he recognized that church that morning had been a little different. Reverting back to his surreptitious presence, Brooks wouldn’t take his eyes off of his brothers or stop his playing with them, but he started asking me questions. He was impressed that he had a chance to be so close to the action – he’s used to staying in his pew for most of the liturgy, leaving only to receive Communion. He asked questions about the things that the priest said in the sermon and questions about the words that were spoken in the liturgy. All with his eyes still fixed on his brothers.

Suddenly, he lifted his head, fixed his eyes firmly on mine, and asked the question that had really been troubling him: “Uncle Jon, where’s the cross?”

He asked it defiantly. Protectively, even.

I noticed the shift in his mood, and maybe even sensed where he was going with this, but I wanted him to find it a little more on his own, so I asked for more information. “What cross is that?”

With a sense of exasperation in his tone, Brooks said, “I saw the priest draw a cross on my brothers this morning and I don’t see it anymore. Where did it go?”

Now, I know this sounds like the kind of story that preachers make up to use in their sermons, but I promise – it really happened! And I couldn’t let such a perfect moment go to waste!

I looked down at the boys and started playing with them again – taking on Brooks’ surreptitious attitude and I said calmly, “It’s still there.”

Brooks grew noticeably annoyed with me. With firm defiance he said, “No it’s not! I saw her draw that cross and I don’t see it anymore. Tell me where it is!”

I looked back up at him and told him, “It’s still right there,” and I touched my nephews on their foreheads. “She dipped her thumb into a little bit of oil, and she drew a cross on their foreheads, and she said to each of them, ‘You are sealed by the Holy Spirit in Baptism and marked as Christ’s own for ever. You can’t see the cross, but it’s there and it will be for ever.” I reached up and traced the cross on Brooks’ forehead and I said, “and you have one, too. We can’t see it either, but I know it’s right there. And it will be for ever.”

I don’t know if Brooks believed me. I told him the truth, as best I knew it, but it wasn’t the truth he expected. It must have seemed a little unreal.

We had a little bit of an experience of the Resurrection that day. Sitting at that restaurant in Jackson, Mississippi, we experienced something not entirely unlike the women at the tomb on that first Easter. “You are looking for Jesus of Nazareth, who was crucified. He has been raised; he is not here.”

They must have felt like my nephew looking for the cross. They had seen something that didn’t make any sense, and as wild and untrue as the explanation seemed to be, what else did they have to go on?

Just yesterday the darkness and death of Good Friday seemed to have prevailed. Everything this week has been pointing to that. But tonight we stand in the presence of the Resurrection and we see that there is more to the world than we had previously been bold enough to imagine. Almost in retrospect we allow ourselves to drift back through the story of God in our lives. It seems entirely unbelievable and against everything else that we think we know about how the world works, but the more you think about it, the more you can see that God has not abandoned us.

The truth of the Resurrection is not revealed so much in the empty tomb as it is in the retelling of our story:

When “the earth was a formless void and darkness covered the face of the deep,” God was there, willing order out of chaos.

When there was “rain on the earth for forty days and forty nights” there was, through God, a way to be saved.

When we faced the enslavement of oppressors on one side and certain death on the other, God made safe passage where before there had been none.

In the light of all that has been told and taught, Resurrection is less a surprise and more like a logical next step!

Like the women at the tomb still seeking opportunities for service to their friend, or like the young child looking for the mysterious cross that once was on the heads of his brothers; we, too, approach this night in an unexplainable mix of stunned disbelief and expectation. We have come “looking for Jesus of Nazareth, who was crucified.” But “he has been raised.”

We can’t see it anymore, but the cross is still there. And it is our calling to go out and tell the good news. Alleluia!
St. Peter's; Morristown