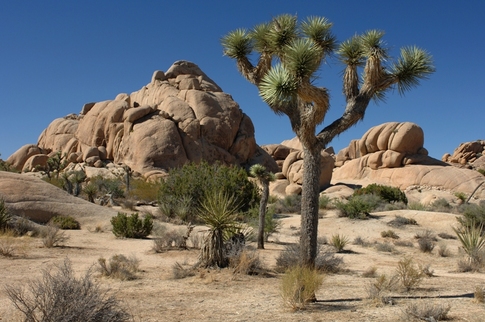 I love this time every year - when we hear again a bit of the saga of John the Baptist.

It wouldn’t be Advent if we didn’t have John the Baptist - the wild man literally on the edges of society; both physically and socially. He wandered in the wilderness in the farthest reaches of the Promised Land, only barely still inside; and, he preached a gospel that was just as far outside the status quo as he was, himself - the gospel of a promise that runs deeper than the land.

Here in the city, wilderness might seem to be something of an odd metaphor. Surrounded by our streets and sidewalks, and apartments and stores, what can wilderness have to do with us? We have tamed the wilderness. We are in control.

Not too long ago there was an educational/documentary series on the Discovery Channel called “Life After People”. The premise of the show was basically that humankind is only barely holding wilderness at bay. If we were to suddenly disappear, wilderness would reclaim all that is now “ours”. Even the greatest, and seemingly most established cities would eventually - and perhaps sooner than you might think - return to some version of their natural state. Even our most seemingly secure monuments would soon become monuments to our weakness.

So, even though it might not look like it from day to day, the wilderness is all around us, encroaching even in the midst of our illusions of control.

And as true as it is in the natural world around us, so it is in our souls. No matter the degree to which we build up illusions of control for ourselves, wilderness is always at our edges, ready to reclaim what is rightly its own. Sometimes we lose our sense of control through dramatic events such as financial uncertainty, or the unexpected loss of a job. Sometimes it’s through the loss of a loved one or a cherished relationship. Sometimes it’s simply the trauma of life. Whatever the details, they are the times when we lose control over the encroaching wilderness and it suddenly seems to take over.

Sometimes it’s less sudden. Sometimes we’re going about our business as usual, and we look up to find the overgrowth that we’ve either neglected or simply not noticed - and there we are, inexplicably lost in a wilderness when we’d thought we had been in control.

One way of thinking of wilderness is that it’s a state of unencumbered life. It can be scary. It can be dangerous - particularly if we’re not prepared when we enter into it (or when it enters into us…).

But the wilderness is also a place of beauty - a place where God’s creativity outshines our own. It can be a place of inspiration.

Some observers of faith have, over the years, spoken of what they’ve called “thin places” - those places where all those things that seem to divide us from God wilt or fall away; those places where we actually, even if only for a moment, almost catch ourselves really believing in God’s presence.

I’ve found a few thin places over the years. Sometimes it’s as simple as a sunrise or a sunset that I noticed more easily than all the others that slipped past. Sometimes it’s through a relationship - a soul-friend through whom God seems to shine a bit more brightly. Sometimes it’s in a physical place. The mountains have always been thin places for me. The dramatic highs and lows, the stunning views, the crispness, the sense of quiet peace - they somehow add up to a clarity that I often miss in other terrains. When I was traveling in Jerusalem and the West Bank a few years ago I found another thin place. The prayers and presence of millions of faithful people had consecrated those ancient buildings and that land over the course of thousands of years to the degree that it was palpable. God had been so often invoked that I didn’t feel that I even had to try - God was simply there, to bask in.

I’m sure you have your own thin places - those places where you’ve come to accept the vulnerability of your wildernesses, and where you can be comfortable losing your illusions of control for a time.

John the Baptist, that wild - and maybe even crazy - man who dared to live in the wilderness, reminds us what Advent is about. Advent is about seeking to make the places in our lives a little thinner. It’s about clearing away the clutter in our lives that we use to try to keep God from breaking through.

Most of us tend to run from wilderness. We protect ourselves from it. But in Advent, as part of preparing our hearts for Christ, we are called to reach out and to embrace the crazy and wild people inside ourselves, and to allow them to carry us home - home into the wilderness. Home into the thin places where even in our unbelief we can’t help but to see God.

It’s scary. And yes, sometimes even a little dangerous. But only if we’re not prepared.

It’s already there. We just need to notice. Amen.

Jon M. Richardson said…
haha Mark... Look back a few weeks... While thinking about apocalyptic imagery from Jesus, I couldn't get Mama Cass out of my mind. :) That's often part of my process... sometimes more explicit, and sometimes less so :)