A kingdom that cannot be shaken 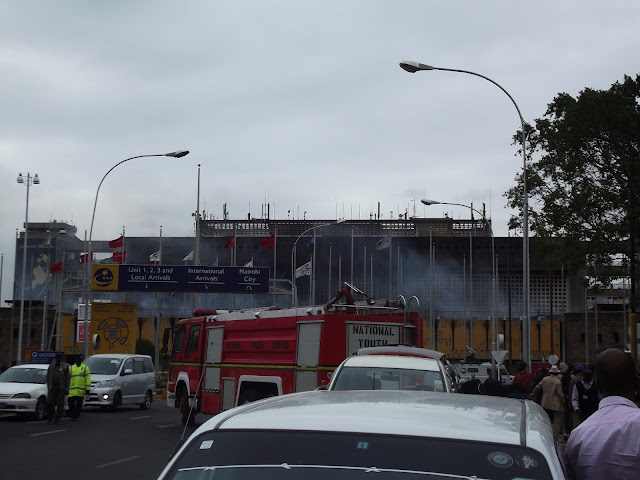 Well, it’s good to be back.  My time in Africa was inspiring and beautiful and full of adventure - even a bit more adventure than I’d originally planned.  My time at home in Tennessee and Mississippi was relaxing, and gave me a chance to reconnect with family and friends, even though it did prove to be a few days shorter than I’d originally planned.  I return to you refreshed, and eager to begin this next year together.  We have a lot of work to do, but also some times of celebration and fun planned, and I’m eager for us to continue exploring together where God is calling us in the year ahead.

But our work starts here: at worship.  In hearing the word of God.  In breaking it open together.  In breaking the bread and sharing in the cup, and taking our faith - and even our doubt - out into the world where God has scattered us.

As I was preparing to preach this week, something happened that doesn’t often happen.  I tend to preach, as I was trained, pretty unfailingly on the Gospel.  There are often hints of the other lessons that work their way into my thoughts, but usually the Gospel lesson is the center - the place where I begin.

But this week, as I read through the lessons, one line from the Epistle kept standing out to me.  It kept sitting in my mind and became the lens through which I saw everything else: “We are receiving a kingdom that cannot be shaken”.

“Since we are receiving a kingdom that cannot be shaken, let us give thanks.”

“A kingdom that cannot be shaken.”

So many of the kingdoms of this world not only can be shaken, but seem too often prone to being shaken.  We may not always see it as acutely in this part of the world as in other places, but kingdoms are shaking all around us.  All the time.

You may have heard part of the story of my sort of surprising trip home from Africa.  The day my friends and I were scheduled to leave - after we were about an hour or so away from the camp where we’d been staying - our host, the village elder, James ole Lesaloi, received word of a fire in the international terminal at the Nairobi airport.  We were still several hours away from the airport, so we assumed - probably out of our American ignorance (or maybe even arrogance) - that by the time we arrived the fire would have been put out and service would be restored in time for us to make our flight, some eight hours later.

Somewhere in the back of my mind I think I already knew this to be true, but I had never really experienced it as drastically as I was about to over the next 48 hours.  In the developing world, systems can be easily shaken.  When things are running smoothly, you hardly notice it.  But when the structures of that part of the world get shaken, they can begin falling around you like dominoes.

We sat by the roadside - prohibited from entering the airport grounds - from about four hours prior to our scheduled departure.  The police officers advised us to sit there for “some few minutes” - that soon things would get cleared up and the airport would reopen.  As our flight’s scheduled departure grew closer, we became more anxious, and eventually convinced the police officer to let us through.  We believed that if we could just get to the ticket counter to speak with airline agents, we’d know more about when we might be able to leave.  It was only when we saw the still-smoldering ruins of the terminal that the gravity of the situation began to sink in for all of us.

The details of the story could go on - the now nearly laughable chaos we went through trying to get home - but in brief, we ended up taking a bus the next day from Nairobi to Kilimanjaro, Tanzania, where we were told a plane would be waiting for us to get us to our flight back to Washington, D.C., just 24 hours late.  Of course the bus ride took longer than we were told, and the plane wasn’t there, and when we did finally make it back to Addis Ababa, Ethiopia, we were told there were no seats available on that evening’s flight.  It wasn’t until my traveling companions and I essentially staged a sit-in at the customer service desk before we were granted boarding passes and seat assignments for the flight to D.C. that night.

We eventually made it home 48 hours late - a fate much more favorable than many other travelers’ stories I’d heard who were in the same position as ourselves.

The point of all of this is to say, the “kingdoms” we were relying on not only could be shaken, but were actively shaking, and even crumbling.

And that brings me to the story we hear today from Jesus - that kingdom shaker we’re here to worship.

It wasn’t so much the fact that he was healing that troubled the leader of the synagogue; it was the fact that he was healing on the Sabbath.  There’s a way that we do these things.  You can heal the sick six days out of the week, but to heal on the Sabbath is against the rules.  And the rules are there to keep the kingdom from shaking - to protect the established order.  Rules don’t envision newer, more stable kingdoms, they’re only there for the kingdoms we already know.

James, the village elder and our host, was also something of a kingdom-shaker.

The established order - the social norms - of the Maasai culture, including the communities we visited, dictate that girls can be given in marriage so that her family might profit from the dowry that’s paid for her.  In the Maasai culture, the primary instrument of wealth is the cow.  And the going rate for a wife is 10 cows - valued at somewhere around $2,000.  Because girls are so valued, marriage can happen as early as 9 years old - and often to men as old as 50 years old.  In the dominant culture there, it’s fine to educate girls, but only as long as it doesn’t interfere with the men and their wishes, or families and their financial stability.

James saw this “kingdom” that stood around him, and imagined another way.  He’s come to see that if girls are older and more educated when they marry, the dowry they bring can still provide financial stability for their families, but beyond that, staying in school longer makes them more productive members of their communities.  They might even have more of a chance to become leaders.

So to accomplish this goal - educating girls and protecting them from early marriage - he’s led their community school into unprecedented growth: providing high quality education for children that has become the envy of every family.   They’ve even established a girls rescue center that, in addition to educating these at-risk girls, protects them from early marriage, or genital mutilation, or anything else that might keep them from becoming strong, educated, and productive members of their communities.

He’s shaking his culture.  But only to make it more stable.

That’s the kingdom of God being built.  It takes some shaking.  But it’s being shaken up to settle down into an unshakably strong community.

One of those quasi-theological questions that you’ll sometimes hear is, “Can God create a rock so heavy that even God couldn’t shake it?”  I think the answer is YES.  The kingdom of God is that rock - that “kingdom that cannot be shaken”.  And God is creating it right now: in the work of Jesus shaking things up around him; in the work of James shaking things up around him; and even in our own work, when we are brave enough to shake things up around us.  It’s only then that the rubble can settle in to something unshakable.

The shaking can be a little unnerving, but it’s how God builds that unshakable kingdom for which we give thanks.  Amen.
Good Shepherd; Philadelphia