Groundhog Day, or something more? 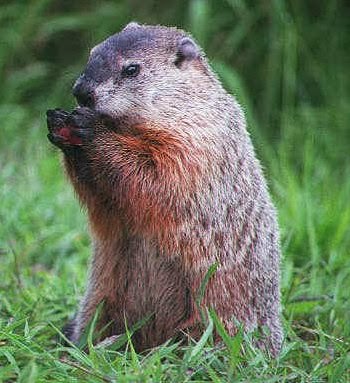 We don’t hear many stories about the childhood of Jesus.  The most most of us ever get is the stories about his birth.  We hear them every year.  We spend a month building up to them.  But in the weeks that follow, we fast forward through the decades and hear stories of his calling and baptism, and the beginnings of his ministry.

Mary and Joseph seem to fade into the background.  No one tells us much of anything about how he got there.

One of the few exceptions to this is the story we hear today - the story of his Presentation in the Temple.

This isn’t one of the stories that most of us have written on our hearts.  It is a “major feast of the church” - at least on paper - but the truth is, in practice, our congregations often let it slide.  We don’t usually have big, festival celebrations.  We don’t gather the family in from all the corners of the Earth.  For most of the people you know, there’s probably more excitement today about Groundhog Day than there is about the Feast of the Presentation.  And almost definitely more excitement about the Super Bowl.

But this oft-neglected feast lets us in on some pretty important details about the life of Jesus.

Remember that “how did he get there?” question?  The lessons we hear today point us to an answer.

Mary and Joseph were leading a young, but pious and devoted Jewish family.  One of the expectations of faithful Jewish families was that they would offer their first-born sons to the service of God.  Forty days after he was born, his parents would bring him to the temple, make sacrifices for his purity, and pledge his life in the service of God.

To my mind, that’s the most important thing we learn about Jesus’ upbringing from the Feast of the Presentation: that he was raised in a faithful home by faithful parents.  Mary and Joseph did everything in their power to raise Jesus as a good Jew.  They raised him to know the traditions of his faith, and to worship the God that they were meant to honor, even from his earliest days - even before he consciously knew what was happening.  The faith was ingrained in him.

Earlier this week there was a story in the New York Times about Vern L. Bengston, a professor of sociology at the University of Southern California.  For the past 45 years he’s been studying religious heredity.  He’s found that in the past four generations - despite popular cultural beliefs to the contrary - the rate at which younger generations embrace the faith of their parents has been holding steady.  He found that while denominational loyalty is down - a child may leave the Baptist church to become a Presbyterian - the core elements of belief, and even the practice of those beliefs tends to span the generations.

Interestingly, however, one of the variables that he discovered in the study, is the closeness of the relationship between the child and his or her parents.  Children who are raised in warm and supportive homes are more likely to practice the faith of their parents.  Children who felt more distant from their parents are more likely to seek another path.

This trend could be seen across a range of faith traditions, including atheism.  Even if children left the practice of faith that they had been raised with for a time, they were more likely to return as adults if they felt loved and supported by their parents as children.

So the other thing we learn about Jesus’ childhood and upbringing from the story of his Presentation in the Temple is not just that he was raised in the faith, but we can deduce that that faith was practiced in a warm, stable, loving, and supportive home.

We may not know many of the details about Jesus’ childhood, but a picture begins to emerge.  The Feast of the Presentation of Jesus in the Temple is really a celebration of the family.  It’s a time to give thanks for the faithful and loving family that raised him, and also a time to examine our own families - to discern the quality and character of the faith that we’re passing down to the children in our own lives, and to strive to see that those seeds of faith are planted in the fertile soil of love and support.  That’s the surest way to pass the church on to the next generation.

But the Presentation isn’t just about the nuclear family.  It also has a lot to do with the support that family receives from the wider community.

Jesus’ Presentation in the Temple wasn’t just a discreet, private event.  Whether or not they wanted to, Mary and Joseph didn’t just slip in by the side door, do their ritual, and leave unnoticed.  They were embraced and celebrated by the wider community.

First we hear the story of Simeon - a man on whom the Holy Spirit rested.  He had spent his life in search of the Messiah, and he knew that his life would not end before he found the one he sought.  While most Jews were looking for a powerful king to come and save them, Simeon saw the infant Jesus and knew the truth in his bones.  He embraced the baby and proclaimed with the relief of a life’s mission ended:

“Lord, you now have set your servant free
to go in peace as you have promised;
For these eyes of mine have seen the Savior,
whom you have prepared for all the world to see:
A Light to enlighten the nations,
and the glory of your people, Israel.” (from the Book of Common Prayer)

Then we hear the story of Anna.  She was an old woman - a prophet - who had devoted most of her adult life to prayer and worship.  When she saw the child, she, too, endorsed him and celebrated him in the Temple.  From that time forth, she spread the word of his presence and his promise.

Mary and Joseph didn’t do it alone.  They had the support of their community in raising their child to become faithful and devout.  At every step along the way, other people in their communities supported them.  From the shepherds and the wise men who came at his birth, to Simeon and Anna in the Temple, to the people of Nazareth - Jesus was steeped in the lifestyle of his faith at every step along the way.

No matter what our individual families may look like, we, too, have a responsibility to play a role in passing the faith along to the generations around us.  Mary and Joseph didn’t do it alone, and neither should anyone else.  We all have a role in shaping the faith of the little ones around us.

So, even if you’ve never really given much thought to the Feast of the Presentation, the ideas that it celebrates should ring true.  It’s about faith, and family, and community.  Moreover, it’s about how those three intermingle, and the great things that can come from them.  It’s a celebration of the past, but also a charge for the future.

We are all fleeting elements in the story of this faith, but the ways that we live our lives now - the ways that we share our faith with each other and support one another in each other’s journeys will ripple through the generations.  It’s part of how we live.  Amen.
Good Shepherd; Philadelphia