Keep Calm and Don't Be a Hypocrite 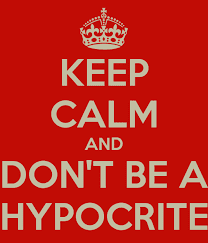 May Christ show us the way, and may we see that way in the world around us.  Amen.

There’s an old story about a pastor who was out recruiting for the church among the heathens.  This one, particular mess of a man was the real prize the pastor sought.  He’d been trying to lure the man to church for years, but the man would have none of it.  Finally, the pastor says to the man, “Give me one good reason why you won’t come to church.”  The man says, “Because there’s too many hypocrites there.”  Quickly, the pastor shot back, “That’s not true.  We still have room for you, too!”

Oftentimes these days, you’ll hear religious leaders bemoan that America used to be a “Christian nation” but that we’ve moved away from those roots.  They’ll point to statistics like the decline in church attendance as evidence of the secularization of our culture.  And, while it is true that more and more people are more and more comfortable with sleeping in on Sunday mornings, or golfing, or playing soccer, or whatever else – it’s also true that one of the reasons most frequently cited for choosing not to go to church is that church members are seen as hypocrites.  And most people don’t want anything to do with hypocrites.  The irony is, neither did Jesus.

Churches have gotten a reputation for judging people – for divorcing, for reproductive decisions, for sexual identity and expression; even for things like political and candidate affiliation and support, or gender equality.  The reality is, Jesus didn’t have much to say about any of those topics, and he didn’t have anything to say about most of them.  But one thing you’ll hear a lot from Jesus, if you’re paying attention, is that he had very little patience for hypocrisy.

Usually, that impatience was directed to the religious leaders of the day – the ways that their teachings didn’t match up with their actions; the ways their proclamations of the love of God failed to extend to their own practice of loving God’s people.  But in the Gospel reading that we shared today, Jesus is imploring his own followers to reject hypocrisy in their own lives and work.

They come to him bragging: Jesus, we saw someone outside the club acting like they were inside the club.  But we shut it down!  But Jesus said, no.  If they were sharing the truth we share, then who cares what their membership cards say?  If they were helping with the work we’re trying to do, who cares how they got there.  The point isn’t who or how, the point is the doing.

For us, in churches, we have to be careful of the same thing.  Rather than checking membership badges at the door, we should focus a little more on opening the door wider – wide enough for the outsiders to come in, and wide enough for everyone here to go out.  Rather than thinking about what it is that we don’t like, we should work a little harder at celebrating and affirming all that supports our mission.

In the next section of what we read this morning, Jesus goes into this gory list about cutting off hands and feet and plucking out eyes.  I remember hearing that in the past as a threat: don’t be the bad eye, because then we’ll have to pluck you out and throw you away for the good of the whole.  We get locked in on all the gore and dismemberment, but another way of hearing these words is about celebrating and honoring all that’s good.  Don’t let the little that stands in the way of perfection keep you from experiencing all the good there is.

There is so much good.  Why focus on all the rest?  The disciples missed the good that was right in front of them, because all they could see were outsiders.  They couldn’t see that their shared ministry made them insiders with each other.

A few years ago, during the BP oil spill in the Gulf of Mexico, I heard this phrase that’s stuck with me.  Amidst the catastrophe, a scientist was being interviewed on the news about how we’d ever clean it all up.  He said, “The solution to pollution is dilution.”  There are ways that they would work to try to remove as much of the oil as possible, but the reality is, those ways aren’t all that great.  The only thing that would really help the matter in the long run would be time.  The oil would disperse until it eventually wasn’t the pressing problem that it was in the moment.  Ultimately, despite all their efforts, the solution to pollution is dilution.

If we, like so many people in the world today, think the church is overrun with hypocrites, the best response we can make is to drown them out – to avoid hypocrisy in ourselves and in our own actions and choices – until they’re diluted enough to not cause any real harm.  If the church has too many hypocrites, come stand in their way, interrupt their power.  Most importantly, don’t join them.  Watch out for hypocrisy in your actions – keep your actions in line with the faith you claim to hold.