The Way of Salvation Passes Through Justice 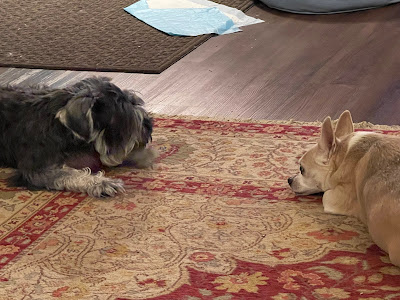 In the name of the God of justice and compassion.  Amen.

It is clear to anyone who really pays attention to the stories we hear from and about Jesus, that one of the central messages of the Christian movement is one of justice.  And it’s not just from Jesus – there are so many readings from the Bible that point us toward justice.  Later, as Advent advances, one of the canticles that we’ll read as a response to the lessons will be the Song of Mary – the Magnificat.  She sings a song of hope and anticipation of the birth of her child, and that hope is largely centered on Christ as the bringer of justice.

When I think about justice and equality, I can’t think of a better, common tool for learning about these concepts than living in a house with multiple dogs.  Any unconsidered proclivity you may have for inequality will quickly be squashed.  Rocky, our older and increasingly sickly dog, now is in a place in his life where he needs a lot of medication throughout the day.  I think I’ve mentioned it here, but the word “pills” in our house has become synonymous with treats.  When we talk about pills, the dogs start jumping around excitedly and running around us, underfoot.  They can’t wait.

But the thing is, they don’t both need pills.  So Rufus has to get a placebo.  Rocky gets one of those gooey, chicken-flavored pockets stuffed to the brim with his many prescriptions.  But we can’t leave Rufus out!  So he gets a little piece of one of the pockets, too.

The same goes for carrots, or time outside, or anything else they enjoy.  If you ever want to see a protest against injustice that cannot be ignored, forget petitions, or marches, or letter writing campaigns – just pet one of the dogs while the other watches.  Your error will be quickly corrected.

That all came to mind reading these familiar words about the introduction of John the Baptist into our liturgical commemoration.  Half the time, when we think of John, we get lost in the image of the wild one in the desert: looking disheveled; wearing rough, unfashionable, hand-hewn clothes; subsisting on the unappetizing forages of the wild…

But beyond that striking, even shocking, exterior – what we hear from him is the voice of a prophet crying out for justice in the ancient words of his faith.  “Every valley shall be filled, and every mountain and hill shall be made low, and the crooked places shall be made straight, and the rough ways made smooth…”  This cry for justice was, by the time of John the Baptist, likely over 500 years old.  They were written to give hope to the people of Israel in a time of social and political crisis – hope that God’s savior for the faithful was indeed coming, and that that coming would mean a world of justice never yet imagined.

Those were the words that John cried out to all who would hear – in another time of social and political crisis.  The part of our reading today at the very beginning, before getting to the poetry of Isaiah – that’s half of the point of that.  The stuff about the rulers of Israel, who mostly weren’t even among the people of Israel – that just shows that their world was again in an unsustainable and fragile place.  Again, they were in grave need for the salvation of God.

The other point is this: even in the midst of all of those powerful people, even when influential people with massive platforms were available, even then God chose a weirdo wandering in the desert.  “The word of God came to John…”  Not to the governor.  Not to the emperor.  Not even to the religious leaders.  But just to John.

And John knew, as the faithful people of God have known for untold generations, that the way of salvation passes through justice.  To make the way for God, get all the mess that isn’t a part of the heart of God out of the way.  Prepare by working for equality in a world that makes it seem impossible.

Who could ever level a mountain?  Who could ever fill in a valley?  So much of the world is rough, how could we ever smooth it all out?

We may never literally do any of that (and why would we want to?), but when we unite as the people of God, we can certainly make someone’s climb easier; we can certainly lift someone up from the pits of their despair.  And that is how we see God.  And not just how we see God, but that’s how we show God to everyone who thinks God is out of reach.  That’s how we show God to people who are struggling through the rough places of the world, or lost in the twists and turns of the crooked.

The world seems predisposed to inequality and injustice.  And just like during John’s time, many of the leaders of the world seem determined to exploit that.  But we have the faith of the ages on our side.  We have the wisdom of millennia showing us how to make a better way.

There are powerful and influential people in our time, too.  But if God could come to John – the unlikely character that he was, surely God can come to us, too.  So let us prepare the way.  Amen.