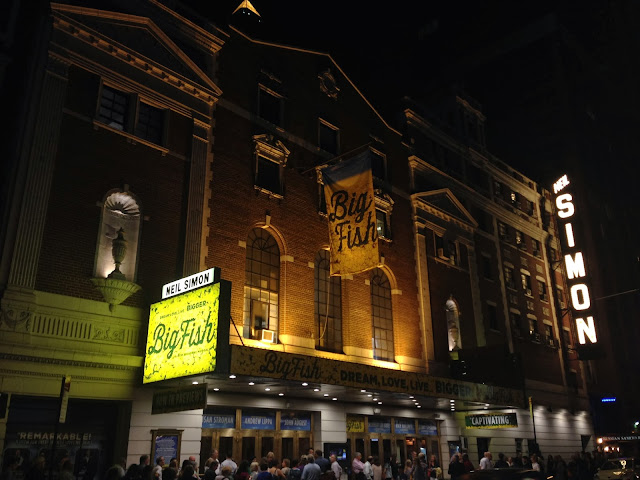 Synopsis: A stage musical following the same general story of the 1998 book and the 2003 film of the same name.  While I have seen the film, it's been a long time, and I don't remember a lot about it, so I can't speak to whether or not the stage adaptation is "true" to the original story.  But generally, it's the story of a father who tells tales of a wild life to his son, who never really knows what to believe, or even whether or not to believe.

My thoughts: Big Fish isn't one of those "important" works of the theater that changed my life or my worldview in any radical way, but it was a fine piece of theater.  The production was masterfully executed, which, quite frankly, is the least I would expect from such a masterful assembly of talent.

I've often recognized that one of the aspects of the theater that I feel least equipped to write about it the nature of directing.  I understand music enough to be conversant there.  I have enough of a gut instinct to speak about choreography - at least emotionally.  Over the years I've learned a bit about lighting and projection design from friends and observation.  But I've never really wrapped my mind around how to observe or judge the work of directors.  My guess is that the director is largely the "big picture" person behind a show - pulling together all of the smaller moving parts and using them to mold the larger narrative.  But I don't really know how that happens, or how to tell if it's happening well beyond my own "big picture" judgements about whether a production works or not.

But witnessing the work of five-time Tony award winner Susan Stroman - I can't say that I now really understand the role of the director any better - but I can at least recognize greatness when I've seen it.  Clearly she's doing something that works.  Everything, from the movement of the people and the sets, to the dynamics of the costumes (designed by the equally brilliant and Tony-winning William Ivey Long), to lighting and color palettes - every aspect of the production came together in a seamlessly woven story.  The aims of the book and score could not have been communicated more clearly.

If that's what a director does (and I think it is) it was done well in this production.

This was one of the shows that I was most excited about seeing this season - mostly because it was an opportunity for me to see "live in living color" the always brilliant Norbert Leo Butz.  He's one of those Broadway stars that I've admired and listened to for a long time, but have never seen live.  His performance, of course, didn't disappoint.  This Louisiana native wasn't terribly thrilled with his attempt at an Alabama accent, but c'mon...  He's Norbert Leo Butz.  Who cares?!  He clearly connected with his fellow performers and delivered a performance that was more emotionally stirring than any excellence in merely acting or singing might offer.

He was joined in the cast by the equally talented Kate Baldwin and Bobby Steggert.  It's almost hard to think about what the bright spots in the production are, because there are simply so many, but for me, one of them was clearly Bobby Steggert.  He captured a youthful, self-assured naivete in such a compelling way.  He gave himself over to his character and took me along for the ride.  I don't actually know if I've seen Steggert before or not, but it was hard for me to imagine him in another role.  As far as I can tell, he was born and lives as Will Bloom.  It's not that his performance was some sort of technical genius, but is was utterly honest.  I believed him from curtain up to curtain call.

(update: after writing these words about Steggert's honesty, I discovered this lovely blog piece he'd written about his surprising - and surprisingly recent - "coming out" story.  He talks about the ongoing work of coming out, and the benefits he's enjoyed as a gay man as he's perfected his craft as an actor.  This would be worth reading at any time, but as this Friday is National Coming Out Day, it seems particularly appropriate this week!  I heartily commend it to you.)

I'll admit that I'm a bit later writing this review than I normally am - I saw it in the final days of previews and had planned to publish on opening night.  Unfortunately, the weekend got away from me, and now I'm coming to it a little less fresh than I usually do.  This is exacerbated by the fact that I made a friend in the theater, and didn't do my usual note-taking during intermission.  It was more fun to chat!

But what I do remember, and what I do want to impress, is that it's a lovely show.  It's the kind of show I'd want to take my mother to see.  It's full of feel-good and emotional moments.  I left the theater energized.  So like I said at the outset, it's not "life changing" theater.  But it's good theater.  It represents some of the best that Broadway has to offer in terms of design, performance, and sheer magic.  It's definitely worth your time.