Tales from the Crypt: Hearing what was said 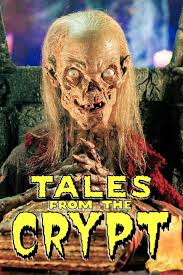 In the name of Christ, our example.  Amen.

Back in the 80s, there was this TV show that I would stay up and watch, late at night on the weekends.  In my mind, I was hiding it from my mother, but in hindsight, I’m sure she probably knew everything I was doing anyway…  But it was called “Tales from the Crypt” – and it told a new horror story every week.

It was several years ago – don’t worry, I’m not telling tales out of school about anyone here - It was several years ago when I was serving a small parish in Jersey City.  Shortly before I’d arrived, the Interim had fired the Parish Administrator, and the work was being done by a volunteer.  Not long after starting my work, I learned that she’d recently lost her job, and that was why she suddenly had time to do the work.  So, rather than going through an exhaustive search process, and probably never finding anyone anyway, because it was such a small, part-time job, I broke every rule in the book and allowed the volunteer to continue as our Parish Administrator, though I insisted that we begin paying her: partly to build in some accountability, but just as much because I knew she really needed the income.

Well…  There are reasons that we’re not supposed to hire parishioners…  The truth is, she really wasn’t all that bad.  We had occasional disagreements, and sometimes she had a hard time distinguishing between her role as a church member and her role as a church employee.  But where we most often differed, was on issues around language.

She absolutely could not stand for me to talk about advertising and marketing related to our parish.  She insisted that it should be called “evangelism”.  Sometimes I could really set her off if I started talking about our “brand”.

But where everything always came to a head was in crafting the weekly announcements for our Sunday bulletin and weekly email.  Almost every week, she would have an announcement about something going on in the parish, or in our outreach work, or whatever else we had going on, and begin the announcement by saying, “As Father Jon said in his sermon last week…”

The thing was, I’d almost never actually said it.  Sometimes it was even in direct contrast to what I thought I’d actually said.

I’ve used that story lots of times when I’ve taught preaching classes: what we say and what the people we’re speaking with hear, isn’t always the same thing.

And Michael and I have faced this in our own lives.  Me, being a native Southerner, and him, being a native Brooklynite – we often communicate in ways the other doesn’t understand.  For the first year of our relationship, I was convinced he was always angry with me, and he was convinced I was always being passive aggressive with him.  About a year in, we finally started being able to actually understand one another.

So, this seemingly simple story from the life of Jesus, really represents a more profound understanding of humanity than it initially lets on: “Who do people say that I am?”

Jesus knew that was he said wouldn’t always translate into what people heard.

Where the translation was clearer, however, was in the doing.  The people may not have understood what he said – we may sometimes struggle to understand what he said – but the doing made it a little clearer.  It was in the teaching, and the healing, and the loving the unloved and including the cast-aside – that’s where the people really began to understand who this “Jesus” – this son of a carpenter – who he really was.

The same is true for us.  We work hard at putting our best foot forward – helping our community around us to know who we are and what we stand for; helping them to see the realm of Christ realized right here through our outreach and mission – through the ways that we exclaim God’s love to those around us.  But no matter how beautiful our words may be; no matter how welcoming our liturgy may be; no matter how moving our music may be – it’s really in all that we do that we’ll begin to help people understand that this place is an expression and an extension of God’s love reaching out into the world.

We’d be wise, from time to time, to ask that question that Jesus modeled for us: who do the people we serve say that we are?  We certainly say a lot about ourselves: in our weekly emails, on the sign out front, on our website, on Facebook…  But who do the people around us say that we are?  Do they say anything at all?  Do they even know we’re here?

The answer isn’t to shout louder, but to live more boldly.  To serve Christ more authentically.  To love more fully.  If we’re really reckless – the way God recklessly loves humanity enough to choose to be a part of it – if we really do reach deeper and pattern our lives even more after Christ, our “doing” will shape our “saying”, but even more, it will effect what the people we serve can hear.  And, just like Christ, the “doing” will mean more than anything we can say, or anything they can hear.  Amen.
St. David's; Kinnelon