The song that never ends... 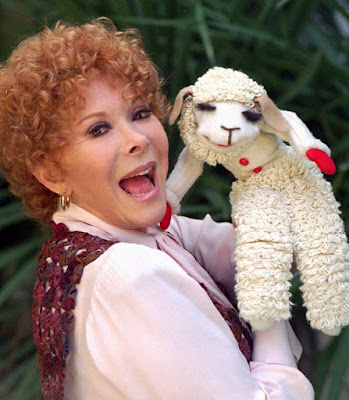 Have you ever heard of an earworm?  It’s some catchy little song, that isn’t exactly good, but is, unfortunately, unforgettable.  In my household, they typically come up late at night, just when we’re trying to get to sleep, when one of us (usually me) will sing an “earworm” out loud.  Because, I suppose, misery loves company.

Well, earlier this week, I caught an earworm.  And, obviously, these things are meant to be shared:

This is the song that never ends,
it just goes on and on, my friends!
Some people started singing it, not knowing what it was.
And they’ll continue singing it forever just because…


The song used to be the end sequence for the children’s show Lamb Chop’s Play-Along that was on PBS in the early 90s, which was hosted by Shari Lewis, and her puppet, Lamb Chop.  The ritual at the end of each show was that the characters would begin singing this song that never ends, until an exasperated Shari would finally get them out the door, still singing their hearts out.  A not-so-subtle hint that the end of the show wasn’t really the end.  Everything that happened could “go on and on, my friends!”

Facing the end of the church year, it’s important to remember that it’s not really the end.  It’s not “graduation day” from church, after having completed a full year of course work.  We’re even at the end of the three-year cycle of lectionary readings.  Having been in “Year C” since this time last year – focusing on the Gospel of Luke, now we start the cycle over again next week, back to the beginning.  Back to “Year A” – focusing on the Gospel of Matthew.

But we’re not just starting a new class next week.  In fact, nothing is really ending.  Because that’s not the way the church works.  The focus of this faith is not about reaching some mythical point of completion, but about engaging in the process.  It’s about connecting to the community, and doing the ongoing work of building relationships – including a relationship with God, Christ, and the Holy Spirit.

Just like our human relationships, while they may sometimes end, so long as the relationships keep living, there is no end point – no goal that can be met.

It’s one of the truisms of our faith: that after every Good Friday there is an Easter.  Or, to put it a bit more generally, after every death there comes a point, usually sooner than we expect, when we should be ready to look for life in its place.  Because life always finds a way.

There’s a picture we have hanging in our home.  I took the picture when we were on a cemetery tour in New Orleans.  It was August, and the moment we walked into the cemetery, we could feel the blast of heat.  We were told it was about 125 degrees inside its walls.  It was about as inhospitable a place as I’ve ever experienced first-hand.  But the picture is a close-up of the side of one of the above ground graves.  In all that heat – in the midst of all that death, coming from out of nowhere – literally from the side of a slab of stone, a tiny plant was growing.  More than one, even.  Even there, life had found a way to go on.

Today, the Gospel tells us, once again, the story of the crucifixion.  We’ve heard this story before, this year.  We also read in on Palm Sunday.  And another version of it on Good Friday.  Because in that context, the drama of the death was meant to point us toward the Resurrection.  It’s where we learned this year, if we hadn’t learned it before, that when faced with the reality of death, our Christian imperative is to start looking for life.  Because that’s what God always has in store.

Well now, the message is a little different.  On this Sunday, when we wrap up the liturgical year and are called to recognize that what it’s all been leading up to – what it’s all been pointing to, is this celebration of the Reign of Christ.  An awareness that the birth, and the teachings, and the miracles, and the suffering, and the death, and the resurrection, and the continued teachings have all led to this moment.  They’ve all been a part of the same story: that Jesus isn’t finished with us yet; that even the ending isn’t the end.

Our tradition teaches us that wherever we’re faced with death, we should start looking for life, and the liturgical year is shaped around the same message.  Because next week isn’t a funeral for Jesus.  It doesn’t begin a period of mourning.  It begins a period of expectation – a period of joyous, and hopeful waiting.  Because we’re still driving toward looking for Christ in new ways.  We’re still reexamining ourselves to see what we’ve been missing all this time.

The Collect of the Day today called on God to “mercifully grant that the peoples of the earth, divided and enslaved by sin, may be freed and brought together under [Christ’s] most gracious rule.”  That’s what we honor today – not births and deaths, or beginnings and ends, but freedom and unity.  That’s the story of Jesus.  A story that keeps working at bringing us together, and freeing us from all that leaves us divided and alone.