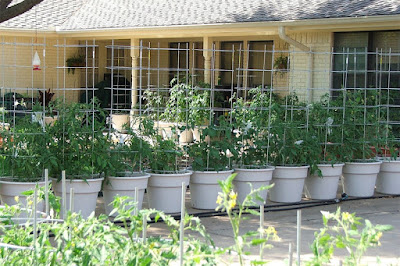 There’s a meme going around Facebook (you gotta ask yourself how many sermons I can start that way…) – but the meme says that growing tomatoes is really the very best way to devote three months of your life to saving $2.17.

Well, up until now, Michael and I had decided not to grow tomatoes at the Rectory, because we were concerned about attracting the bears around here.  But this year – I don’t know, maybe the pandemic emboldened us…  But this year, we finally decided to give it a go.  Inside the fence at the rectory, there are 8 large buckets filled with thriving tomato plants.  We’ve been faithfully watering them and feeding them and tending to them for weeks now.  They’re loaded down with tempting, but not-quite-ready tomatoes.

I’ve thought of our little crop these couple of weeks when the Gospel has been consumed with parables of agriculture – parables that for many of us probably seem a little irrelevant.  Though New Jersey is “the Garden State”, not many of us are farmers.  There are some 10,000+ farms in New Jersey and the industry employs nearly 62,000 people – but we’re a big state.  While those numbers may sound like a lot, it makes up just about one-half of one percent of the population.  So, while farming affects all of us – we’ve all got to eat – I don’t think we have any professional, full-time farmers in our parish.

But, even from our own little crop of backyard tomatoes, I can get a sense of what this householder in the parable must have been going through – to have been striving to create and grow, but to have his efforts thwarted.  And, whether it’s in the ground, or in some other way, I think we all know what it’s like to work to grow something.  Perhaps a child, or a pet.  Maybe it’s an idea that needs to grow into something more substantial.  Or a business, or a ministry, or a skill.  Really, what we’re talking about here is the human impulse for creativity.  It’s one of those most human traits that connects us most organically to God.  God’s nature is to create, and it’s an important part of our nature, too.

So we all know, or at least can imagine the despair that the householder of the parable must have felt as the wheat he was trying to grow was endangered by the malicious actions of an enemy.  Many of us likely would be tempted, just as the workers of the field were, to rip out the weeds once they appeared.  But to do so would have endangered the whole crop.  By that time, they were growing together, and to kill the invader would have meant to kill the wheat, as well.

Last week we heard about the seed that was scattered among the thorns.  As it grew, it was choked out.  So the weeds of the field were more than an inconvenience – they were a real threat.  But the only thing to do was to let it grow – to care for the crop as best he could, and to do the sorting, later.

This is one of those stories that can leave us in a place of judgement.  If you follow it through to the end, there’s really nowhere else to go with it.  But the mistake we can easily make is to assume that it’s our place to do the judging – to jump to the erroneous conclusion that we will be given the task of sorting the weeds from the wheat – the good from the evil – that we will have the guilty pleasure of tossing the evil ones into the fire, where there will be weeping and gnashing of teeth.

The workers of the field are eager to help the householder with the destruction.  But that eagerness would have done more harm than good.  The same is true for us.  We are called to be the nurturers.  We are called to share with God in the creativity and in the growth.  When we catch ourselves rushing to the end of the story – to the judgement and to the punishment – then we’ve strayed too far from the vision God has for us.