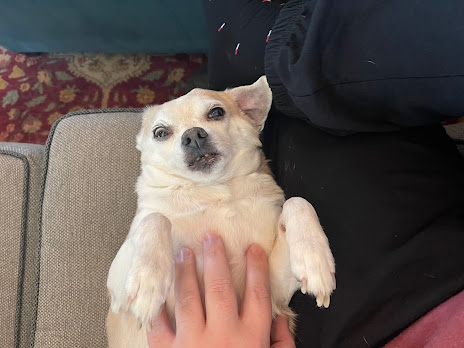 In the name of God who answers all our needs, who loves us to the end.  Amen.

A few weeks ago, our older dog wasn’t feeling well.  He had an upset stomach, but the bigger issue was, he was having a really bad arthritis flare up.  His back legs were in so much pain that he couldn’t lift himself up to stand, and even if we helped him up, he had a hard time holding himself up.  It happens from time to time, and it’s always stressful and scary in our home when it does.  But, really, even if he wasn’t showing the physical signs that he was showing, we would have known that he wasn’t feeling well because of one tell-tale personality shift: he stopped begging.

You see, Rocky is smarter than he has any right to be, and he’s very vocal.  When he wants something, he isn’t shy about letting us know.  I’m convinced he’s not too many years away from actually starting to form words in English.

Each night, we have a little routine of treats that they get.  It started with a little strip of dehydrated chicken, but as their health needs changed, we switched to dehydrated sweet potato.  Then, they started getting these little green dental bones to try to clean their teeth and freshen their breath, but again, as health needs changed, we switched that to green beans.  It doesn’t have the same benefit, but once we start a treat cycle, we’re not allowed to stop.  Finally, after Rocky’s heart condition was diagnosed, we had to start giving him pills every morning and evening, but the pills get wrapped in these gooey, chicken-flavored pouches, so to his mind, it’s just another treat.  Because he deserves it!  (…as he would regularly remind us of that if he just talk!)

We start this routine at 7:00 each night, but Rocky usually starts “lobbying” for it all at about 5:00.  At first he can be calmed by us reminding him that it’s not time yet.  But as we get closer and closer to 7:00, his pleading becomes more intense.  With each stage of the nightly treats, he’ll calm for a bit, but before long, he’s reminding us that there’s more to come.  Finally, after it’s all done, he’s usually calm for a while, but eventually – without fail – the whining returns.  We try our best to ignore it, but eventually, Michael will say to him, “I don’t know what you want!”  I remind Michael that the answer is always, “More.”  That’s all he ever wants – more.

I thought about that after reading today’s Gospel.  Jesus had given these people everything.  They had had their fill – their hunger had been satisfied.  The physical hunger by the miraculous feeding that we read about last week, but also their spiritual hunger.  They had sat as his feet, hearing him teach and hearing the good news of God’s nearness.  But still they weren’t satisfied.  Still, they wanted more.  Still they chased him down, even across the Sea.

Jesus called them out on it.  He says: You’re not following me because you saw God, but because you got something you wanted.  Don’t get trapped in just chasing after your physical desires.  There’s more to life than that.

So in turn, the people ask for the secret – how can they do those amazing things he has done for themselves?  They’ll stop chasing him just as soon as he gives up the secret.

And he does.  He shares with them the secret, but it’s not what they wanted it to be.  He says, the most amazing thing you can do is to love God and to love all that God loves – love all that is of God.  That’s the secret.  That’s what will truly nourish you – to broaden the way you love.

To compare the people following Jesus to our dog might sound patronizing, but I really don’t mean it that way.  Because, no matter how much Rocky might annoy us – no matter how insatiable he may sometimes be – no matter how much he keeps begging for “more” (whatever he thinks that is) – we still love him.  We will still do everything we can to give him everything he needs, and most of all, we will still love him.  That’s what he needs most of all.  Even if he doesn’t always remember it

The same is true for us.  We fall short all the time.  We get distracted and waste our energy longing for what’s not really important, or maybe even not really real.  But even so, God loves us.  God will still give us everything we need, but most of all, God will still love us.  Because that’s what we need most of all.  Even if we don’t always remember it.

Love is the answer.  That’s what will feed us.  That’s what will satisfy the hunger we can’t quite understand or pin down.  And that’s the best way for us to share the Good News of God and Christ with everyone we meet – to model that love that we’ve been given, for others who still need to know.

Love is always the answer.  Amen.