Show me your I.D. 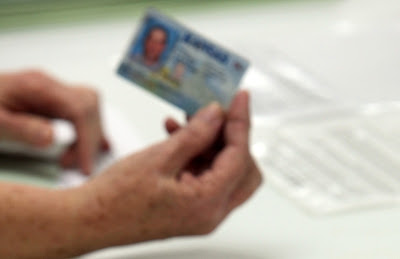 In the name of the God of joy.  Amen.

When I was an undergrad, one of my minors was Religious Studies, and I’ll never forget encountering this gospel story in the first class I took in the study of the Christian Scriptures.  The class wasn’t just a plain “Bible Study”, but the professor regularly used excerpts from Scripture to illustrate whatever point he was making.  On the day of memory, this story that we read today was part of how the professor was teaching us about the concept of Christology – exploring the nature and role of Christ in our faith.

I’ll never forget, there was this one guy in our class.  We were about as different from each other as any two people could be, but we’d befriended each other and regularly studied together – probably because we were both just so hazardously different from each other.  He was an older student who’d gone back to college later in life.  He was gruff and Southern Baptist.  He had a handlebar moustache and a face that looked like it was made of the well-worn leather of a saddlebag that had long-surpassed its usefulness.  We disagreed about just about everything related to the Christian faith, but the thing we shared was curiosity – so that was the foundation of our friendship.  We were each so very curious about the peculiar beliefs of the other.  And because of that, we both learned a lot from the other.

On the day that we explored this story – the story of Jesus and Mary at the Wedding Feast at Cana; the day of the miracle of the water becoming wine – my friend just couldn’t wrap his mind around the story.  “But why did he do it?”, he kept asking.  How could this seemingly unimportant act have revealed anything about the nature and role of Christ in the story of our faith?

Finally, after questioning it for probably the third or fourth time, my friend got a wry smile across his face and said, “So what you’re saying is, this was nothing more than a holy beer run?”  Of course the class erupted and we didn’t get much else done that day.

While I probably never would have thought to put those words around this story of Jesus’ first miracle – the Miracle at Cana – the truth is, my friend was on to something.  Try as I might, even after years of studying this story, after preaching on it more times than I can recall, and even after having visited the site at Cana where tradition tells us that it happened – even still I can’t really point to a very good “reason” for this miracle, other than that it showed us a bit about who Jesus was (and about who Christ is).

If you read scholars’ writings on this story, they will always be quick to point out that in performing this miracle, Jesus saved the bridegroom’s family from social embarrassment – from the faux pas of allowing the wine to run out during the party.  They always explain, that if that had happened, it would have been a deeply embarrassing thing for the family.  But even so, you can’t really argue that the purpose of the incarnation of Christ is to deliver God’s people from embarrassment.

This miracle stands out from the others.  It’s not about healing the sick or feeding the hungry.  It’s not even about revealing the deep recesses of someone’s soul.  It’s just a “holy beer run”.  We’re out of wine?  Don’t worry – Jesus will make more!

But the thing is, it’s not really about the wine, either – at least not ultimately.  Like the lessons from last week (in the story of Jesus’ baptism) were largely about identity, this is about identity, too.  This party wasn’t just a wedding – Mary, his mother, made it a sort of “coming out” party for her son, the miracle worker.  Before, she knew that there was greatness in him; she knew that he had a special connection with the divine that no one else had.  And, she knew that it was time to start letting that secret out.  It was time to introduce her son to the world.

As a story about identity, the Miracle at Cana offers two distinct elements.  First, it’s about declaring that Jesus’ ministry is, first and foremost, good news for the poor – for the under classes.  It is, as the Magnificat proclaimed, about lifting up the lowly.

It’s significant that Jesus didn’t make a public presentation of the wine to host.  He didn’t wait until there was an actual crisis, and then swoop in to save the day.  If the point of the event was to establish his authority and make influential people see that he was, indeed, of God, then that would have been a more efficient way of going about it.

But he also didn’t do it entirely anonymously, either.  If he could turn water into wine, then certainly he could have filled the jugs with water surreptitiously.  Heck, he could have just miraculously filled them with wine without anyone knowing.  But he didn’t choose to do it entirely in secret either.  The servants knew what had happened.

So his first miracle showed who he was and what he was capable of doing to the lowliest people around him.  That’s who was let in on the secret.  Not the host.  Not even the higher ranking servant, the steward.  It was the least “important” people in the room.  That’s who first saw him for what he was.  That’s who he wanted to see.

The second aspect of his identity that is revealed in this story is about joy and sacrament.  The prayer book describes sacraments as the “outward and visible signs of inward and spiritual grace” – those physical things in our lives that point to deeper, spiritual truths.  In the Episcopal Church we recognize two “Great Sacraments” and then five other sacramental rites.  The two are baptism and Eucharist, and the other five are confirmation, ordination, holy matrimony, reconciliation, and unction.  The catechism teaches that the five sacramental rites are different from the two “Great Sacraments” in that, while “they are means of grace, they are not necessary for all persons in the same way that Baptism and Eucharist are.”  My own confirmation class teacher also pointed out to my class, another distinction of the two great sacraments are that they are two that Jesus, also participated in.

So what does that all have to do with the Wedding Feast at Cana?  Well, I would argue that part of the identity of Christ that is revealed in this story is about a sacramental commitment to joy.  In this miracle, Jesus kept the party going.  Jesus recognized the value of our celebrating together and blessed it with his action.

What would it mean to live your life with an understanding of joy and celebration as a sacrament?  You could even argue that they represent a sacrament that is just as necessary for all people as are baptism and Eucharist.  So, what if joy was a “Great Sacrament”?  Not just something that we indulge in when we’re distracted from more important expressions of piety, but a function of our faith in Christ that is as vital as any other sacrament.  What if joy and celebrating together, as blessed by Christ, were seen as an important part of how we worship God in our lives?

In my class, we all laughed at the idea of a “holy beer run”.  But the thing is, it was holy.  Celebration is holy.  Community is holy.  What would it mean if, in sharing this faith of ours with others, we shared that it’s not just about rules – it’s about joy.  Because I think it is.  God delights in our joy.  Jesus blesses our joy.  We should embrace it – for ourselves and for the lowliest among us.  Share the joy.  Amen.