The challenge of politely looking away 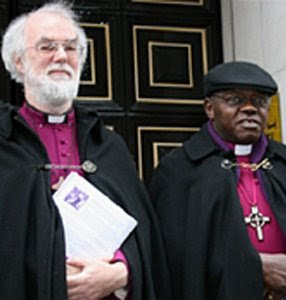 We would always laugh at her declarations. Of course they were a passive-aggressive way of dealing with her discomfort. It was never about anything big, mind you. Perhaps someone had coughed or sneezed at an inopportune moment. Perhaps a piece of food was stuck in someone's teeth.

The Church of England, however, has been involved in this kind of passive-aggressive "politely looking away" for a number of years with regard to its response to issues of human sexuality.

The hypocrisy is unreal. The party line in the C of E speaks of their concerns over human sexuality as if it is a problem somehow outside their ranks.

They're "politely looking away" from the reality that is right in front of them!

In the past few years, since gays and lesbians in the UK have had the benefits of registered civil partnerships, the state church has had a difficult balancing act to uphold in maintaining its strategy of "politely looking away".

The party line from Lambeth Palace was that should priests in the Church of England decide to avail themselves of the civil liberties afforded to gay and lesbian people in the UK, they must first seek their bishop's permission, and do so in tandem with a vow that they will not engage in sexual activity with their partners. What is the end result of all of this? Systematic "politely looking away".

The problem with "politely looking away", however, is that it denies reality. And when the church works so hard at denying reality, the church becomes dangerously likely to become (or become more so, or remain) irrelevant. And that's what seems to be happening now.

It is now being reported that within the past two weeks, two gay men, both Anglican priests, have been married in the Church of St. Bartholomew the Great in London. It was done in a very traditional service of worship, according to the marriage rite prescribed in the 1662 Book of Common Prayer.

Now the leadership of the Church of England are in something of a fluster because the actions of two of their priests (particularly because of the media coverage around the event) are making it ever so harder for them to "politely look away" from the reality that surrounds them.

In a joint statement, the Archbishops of Canterbury and York have said:

"Those clergy who disagree with the church's teaching are at liberty to seek to persuade others within the church of the reasons why they believe, in the light of scripture, tradition and reason that it should be changed. But they are not at liberty to disregard it."

I have to admit, I agree with the Archbishops. It is true that injustice is better and more effectively confronted from within the systems of power. That is, IF it is possible to do so. IF the systems of authority will (or CAN) hear you.

The problem in this situation is that the systems of power within the Church of England CANNOT hear those prophets crying in the wilderness for a new way to experience the reign of God in humanity. They are too busy "politely looking away" as if that will somehow cause their "problems" to go away.

And, as the Archbishops are discovering, when an institution's rules become so wildly out-of-sync with the norms and values of society at large, the institution becomes irrelevant and the society at large DOES "disregard it" or its rules. That's what is happening in the Church of England. It has been happening for decades as church attendance has been steadily declining - I recently heard that church attendance rates in the UK are now around 4%. Most people don't skip church because they reject Christianity, or God, or faith. Most people who skip church do so because they see the church as irrelevant. And when we use "politely looking away" as our guiding principle in dealing with difficulty or discomfort, we cannot help but become irrelevant - not only in perception, but in fact.

In this Sunday's Gospel text we will hear Matthew's Jesus say, "I have not come to bring peace...." We of the Church should hear that lesson. As the Body of Christ, we are not called to bring "peace". We are, however, called to bring about the reign of God in the world. Often getting there is not a "peaceful" process. We cannot achieve God's vision for humanity by "politely looking away".
Lambeth reflections

Nina said…
Reading this causes me to reflect that, as I understand the Gospels, Jesus himself had no capacity whatsoever for "politely looking away."

As we know, this got him into a heap of trouble with the authorities of the time. And those authorities thought they'd had the last word... but they hadn't.

So it would seem that a church that devotes itself to "politely looking away" has strayed pretty far from the teachings of Jesus. What's interesting to me is how, as you point out, ordinary people with no training in theology have picked up on this intuitively, and voted with their feet.
June 19, 2008 at 7:10:00 AM EDT

Jon M. Richardson said…
Nina,
One of my professors in seminary used to say, "If you've come to church looking for 'gentle Jesus, meek and mild', you'd better look elsewhere. He doesn't exist."

You're absolutely right. And when we act in opposition to what would be seen as integrity in the Christian faith, the church dies.