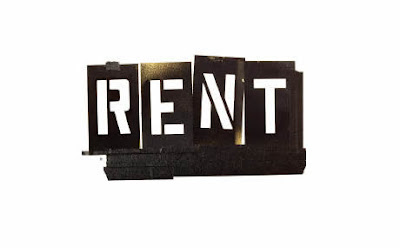 Synopsis: The off-Broadway revival of the landscape-shifting Jonathan Larson musical from 1996.  It won the Tony award for Best Musical and was one of the rare musicals to win a Pulitzer Prize.  Rent tells the story of a tight-knit group of friends in Manhattan's Lower East Side, struggling to create and survive in the midst of financial and physical hardships.

My thoughts: I've often reflected on how the experience of live theater is so much the experience of a "moment in time" - how the actors, and other artists, and audience are all invested not just in a performance, but in a shared experience.  But last night's performance of Rent had me thinking about the "moment in time" from a different perspective: through so much of the show last night I found myself wondering if I was participating in a moment whose time had passed.  In the 16 years since Rent first opened on Broadway, the world has changed so much.  And to a degree, I often felt last night like I was watching a museum piece compared to the relevance and importance that the show once represented.

Like so many people from my generation, Rent is an important part of my own personal history.  It's been described as being for my generation what Hair was for our parents' generation.  In terms of my own life-story, Rent originally came at what was an important crossroads in my life.  At the same time that it was coming into popular acclaim, I was coming out.  And it served as the soundtrack to my life during that important time of self-realization.  It was the music and the story that fed me as I was learning to love myself under a new set of circumstances.

My feelings on this production in particular are mixed, at best.

Part of the problem is that it's still too much the show that it was first designed to be.  To the degree that it's been updated, it's been done so unevenly.  Though scaled down for the smaller venue, the set design is essentially as it was in the original production.  While many of the costumes (designed by Angela Wendt) are essentially the same as they were in the original production - at least in style - some character's costumes seem to have been "hipsterized" to today's standards.  For example: Mark is a hipster, almost exactly out of a 2012 Brooklyn style sheet - so much so that the kid next to me was wearing almost his exact outfit.  Roger, on the other hand, is found wearing these platform combat boots as might have been found in the 1990s London punk scene.  Collins is a hipster, but Benjamin Coffin III is wearing a shiny, lime green accented "pleather" jacket that belongs solidly to the 1980s.  The show promised from the outset that it was set in 1991, but the costuming cluttered that attempt.

Moreover, the attempt to keep the piece as a whole "exactly" (to the degree that "exactly" is even possible) as it was in the original, missed out on one of the more important aspects of the show in its original form.  As I said above, part of what made Rent so important in the moment in time in which it originally debuted was that it was so edgy - it spoke in such plain language to the concerns of its day.  I would have been more impressed if it had attempted to be that same voice to today than I was at its attempt to replicate the voice of those years ago.  For example, the whole bit about clearing the tent city in the park could remain incredibly relevant in the light of the recent and ongoing Occupy Wall Street movement.  The heartbreaking saga of impoverished/disenfranchised masses fighting the oppression of corporate powers remains highly relevant, but the current production doesn't point us to that realization.  It presents the struggle as an historical one - not a current one.  As a result, the production becomes a caricature of itself.

In terms of logistics, the current production represented some additional hardships.  I'm rarely a fan of literalism - almost anywhere (biblical literalism comes to mind...) - and certainly not in terms of stage presentation.  While the production slapped me with troubling literalism in several places, the most glaring offense happened in their interpretation of the song "Christmas Bells" near the end of Act I - this is the one that repeats the "beginning to snow" line several times throughout.  Each time "beginning to snow" was sung, snow would would begin to fall from above and then abruptly stop...  Only to start again the next time the line was sung.  The first time the snow began to fall, it made sense and was clever.  Thereafter it was overkill and silly.

Another logistic failure of the production was found in the projection designs by Peter Nigrini.  The projections were entirely unnecessary, and, almost without fail, more of a distraction than a help in telling the story.  They were cleverly projected onto the set in mostly out of the way corners, but most times I found myself trying to figure out what they were and why they were there.  The story was being told sufficiently without them.  The only possible exceptions  to their distraction were: at Angel's funeral and in the song, "Contact".  They added something of worth to these two scenes, but even there they weren't necessary.

In terms of the on-stage performers, the cast was mostly disappointing.  John Grisetti (in the role of Mark Cohen) was generally pleasant, but overall unremarkable.  MJ Rodriguez (in the role of Angel) was a fine performer, but the new editorial of occasionally lowering her voice for single words now and then was simply lame.  We know she's a boy.  Throwing it out there in that way just made her character silly.  Marcus Paul James (in the role of Tom Collins) was clearly not up to the task of portraying his character vocally - which is saying something because it's not a particularly challenging part vocally.  Ariana Fernandez (in the role of Mimi) was capable at her "rock star, screamy" parts, but missed the mark in her ballads.

Conversely, Justin Johnston (in the role of Roger) was one of the brighter spots in the performance.  He brought his own style and character to the role that was not at all forced or phony.  He was every bit as good as the original, if not a step or two above!

Michael Wartella (in the ensemble playing Gordon, Waiter, and others) was the shining star of the cast.  His voice is simply beautiful, and he capably portrayed the many roles he was called to perform.

While my thoughts have been, to now, generally unsupportive of this production, it is only fair to admit that despite the production's many shortcomings, it still delivered incredible emotion for me.  I teared up several times, and by the end of the show I was sitting in a puddle of my own tears.  In the end, the quality of the book and music triumphed over all the other adversity.  Rent is still an important and evocative show, and while I have issues with this current iteration, I am happy that it is still making its mark on the musical theater world.  I look forward to seeing how its place in the canon of the genre continues to evolve and be reinterpreted in the years to come.