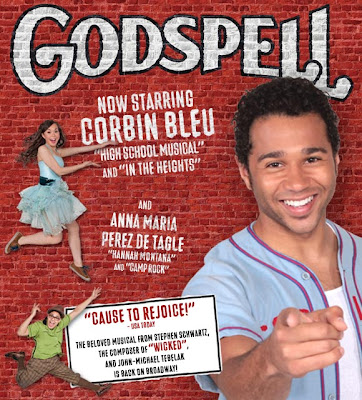 Synopsis: The Broadway revival of Stephen Schwartz's musical setting of the Gospel of Matthew.

My thoughts: I saw Godspell late in previews last Fall, and really enjoyed it.  So as I was looking for a "thank you" gift for a member of my staff who is simply incredible, I quickly thought a night of theater might be just the thing.  And really, this was the show for her.

My instincts were correct.  We both had a great time!  Though a New York City native, Vanessa hasn't seen much theater in her life - and this was only her second musical (my mother took her to her first last summer).  As we were leaving the theater she said, "I can see now why you go so often!  It was beautiful and moving and now I can't stop singing!"

I think that really sums it up.  Godspell is the kind of show you just can't help but fall in love with.  It's funny and serious at times, and in the end, uplifting in the deepest way.

Like just about everyone else, I think, I was in an amateur production of Godspell once upon a time.  So I know the show inside and out - and this production is truly stellar.

As I mentioned above, the stage is in the center of the house, and as a result of that, there's a real sense of connection and closeness between the performers and the audience, and with the whole experience of the performance.  One of the things that I often reflect on in the experience of live theater is the sense of community that we as an audience feel.  There's a sense that we're "in it" together with the performers.  We're not just passively watching, as is the case of video performances.  Our energy is there (potentially, at least) feeding the performers.  And their mistakes and improvisations can't simply be edited.  We are invested in a particular performance - in a moment in time - in a way that can't be found in most other forms of entertainment.  As such, community emerges.  Human interaction - in an age where that is increasingly hard to come by - happens.  And as true as that is for any live theatrical event, it's even more true when the performers are literally in the middle of the audience.

From my own theological perspective, I can't imagine a better time to have theater "in the round" than in a show that tells the story of Jesus.  Building Christian community is, I think, one of the most important things that we, in my line of work, try to be about.  So having a theater experience that reflects (and encourages) that theological position, makes Godspell a home run for this priest/theater junkie.

The stage, while seemingly somewhat bare throughout much of the show, is dynamic and changing.  The scenic design by David Korins does exactly what I usually want and expect live theater to do - it gives me just enough.  It makes the performers work, and it makes me work.  But at the same time, it surprises me again and again.

The choreography, by the ridiculously talented Christopher Gattelli, was brilliant, just as I've come to expect from Gattelli.  Off the top of my head, I can now think of three shows that I've seen very recently that were given the Christopher Gattelli treatment - Silence! the musical, Godspell, and, of course, his now Tony nominated work in Newsies.  As I was reflecting on his work tonight, I found myself looking for some trademark style - some signature that I could see running through these shows.  It wasn't there in the form of particular moves, or anything like that, but I do think I found it: his work is organic.  It has a way of brilliantly matching the moment - the cast, the characters, the music, the story...  It fits so naturally that you almost might not even notice it's there.  Dance is presented as just the only logical reaction to the events going on around the characters.  I can't quite imagine how he does it, but it's a thrilling thing to behold.

The cast is outstanding.  It's hard to think about who the real winners are, because there are so many.

As I mentioned before, I saw this production last fall with the original star, Hunter Parrish, in the role of Jesus.  He was great - and I was pleasantly surprised to learn that the Weeds television star could prove to be so versatile.  But even so, I must say that Corbin Bleu is a huge step up for the production.  He has many of the same qualities of his predecessor in terms of star power and stage magnetism, but he also brings a noticeably elevated level of experience and quality to the singing and dancing required of the role.  It brings to mind the story of the wedding feast at Cana - the one where Jesus turns water into wine.  After they've run out, Jesus provides more, and it is remarked that the best was saved for last.  That seems to be how it is here - Parrish was excellent, but wow! - look what they've brought in for when that ran out!  It was worth a second visit, just to see all that Bleu brought to the table in his interpretation of the role.

Another stand out performance is by Glee alum, Telly Leung.  The beauty of his voice is only matched by its flexibility and range.  As to stage presence - he is equally flexible and energetic.  He gives us everything he has, and he has the audience eating out of his hands.  It's delightful to imagine how much of himself has been infused into his character.  If that sense is at all true, the people in his life are truly fortunate.  He is generous and clever and his performance is a joy to behold.

As I said earlier, there are simply too many favorites in this cast to mention them all, but I would be remiss not to give at least a bit of nod to the brilliant and intense Uzo Aduba.  Her performance has something of a Tracy Chapman vibe to it - which is probably why I loved it so deeply.  She bleeds emotion all over the stage such that it spills out and floods the house.

And finally, much of the credit for the effectiveness of the comedy is due to the slapstick brilliance of both Nick Blaemire and George Salazar.  If you go to the theater to laugh, these guys are your guys to watch.

My one moment of somewhat conflicted emotions about this production is the final scene.  The priest in me can't help but cringe a little that there is no treatment of the resurrection - at least not in any sense of bodily resurrection.  But I will say, however, that on this second time seeing the show, I did notice something that had somewhat eluded me the first time.  Though the Jesus character doesn't come dancing and smiling at the end as we usually expect in these kinds of shows, there is something of a consideration of spiritual resurrection - resurrection through the community.  The cast sings snips of songs that they had been singing all along - the songs that developed their characters; the songs that told their stories - and suddenly those songs merge into the high song (prayer?) of Jesus - "Beautiful City".  Jesus had taught them - "We can build a beautiful city - yes we can.  Yes we can!"  And in the end they get it.  They pick up his solo in beautiful harmony and take it as their own.  I'll admit.  I don't know what resurrection really means.  I don't know if the body of Jesus that had been killed walked again.  But my own faith doesn't rest on those kinds of things - the miracles.  What I do believe, however, is that Christ lives in the community that still follows him.  I believe that Christ lives in the harmonies that we carry on in his stead.  So while I do initially gruff at how this production chose to leave the end of the story, there's a part of me that respects it.  I respect that they left it to me to find the resurrection, and that they didn't shove it on me in some contrived way.