FCS: A Bed and a Chair: A New York Love Affair 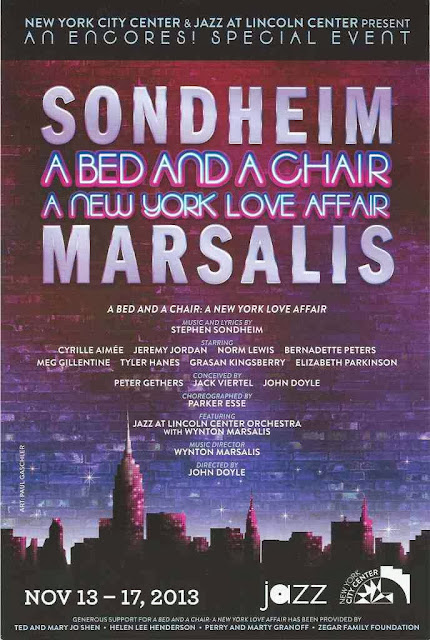 Synopsis: A musical revue of the music of Stephen Sondheim as reimagined through the jazz lens of Wynton Marsalis and the Jazz at Lincoln Center band - starring Cyrille Aimée, Jeremy Jordan, Norm Lewis, and Bernadette Peters.

My thoughts: So I'll be honest.  I really can't believe I got to see this in real life.

I was a little nervous going into the show that I was approaching it with expectations set too high, but now I know the truth: there's simply no way that expectations for this assemblage of talent could have been set too high.  It was simply one of the most thrilling theatrical experiences I've ever had.

I've long been a fan of Stephen Sondheim - I mean, how can you not be?  Generations to come will study his genius in much the same way that we study Bach today.  Then, to have that genius paired with the unmatched jazz talents of Wynton Marsalis.  THEN, to take that product and hand it over to these brilliant performers.  I just can't.  Whoever had this idea - THANK YOU!

The cast was led by none other than Sondheim's own, Bernadette Peters.  It was indescribable fun to hear her give the "Bernadette treatment" to Sondheim favorites that she hasn't previously been associated with.  Standing on the shoulders of Elaine Stritch and Patti Lupone she gave brilliant service to a newly reimaged "Ladies Who Lunch" (from Company) in a unique medley which included "Agony" (from Into the Woods).  Another of the many highlights of her performance was her treatment of the classic "Broadway Baby" (from Follies).  Now that it's been done, you really haven't lived until you've heard Bernadette Peters interpret that classic!

She was joined by the always brilliant Norm Lewis.  I haven't often seen him live, but in the few times I have, it's been an unmatched joy.  He has a softness, and gentleness of spirit that makes his performances evocative and moving.

I was an early fan of Jeremy Jordan.  I first saw him in the out-of-town tryout for Newsies, the on Broadway in Bonnie & Clyde (which, I still attest, didn't get the loving it deserved!), then again on Broadway in Newsies.  I was his fan long before his movie with Dolly Parton or Smash!  But as much as I loved him in each of those roles, this performance really showed growth for him as an artist.  He was vocally stronger than I've ever seen him, and he also seemed more emotionally in touch with his characters.  It it great to see him developing into a legend!

In reality, Jordan got some of the best numbers of the night - and some of the ones that were most brilliantly re-imagined.  His two highlights for me were "Losing My Mind" (from Follies, and delightfully, in its most recent revival, sung by Bernadette Peters - that must have been daunting!) and the most engaging version of "Giants in the Sky" (from Into the Woods) that I've ever heard.

The one member of the cast that I hadn't heard of before was Cyrille Aimée - but wow!  Does she have chops, or what?!  If you haven't encountered her before - I highly recommend her.  The Washington Post describes her as having "a voice like fine whiskey - oaky and smooth, with a hint of smokiness."  I can't think of a better description.  With French and Dominican roots, she was raised in France and those tones continue to resonate in her jazz interpretations.  If you are at all a fan of leading lady jazz, you must look into Cyrille Aimée.  You won't be disappointed.

Though the friend who accompanied me to this production didn't agree with me, one of the more musically satisfying moments of the night for me was the instrumental version of "Send in the Clowns" (from A Little Night Music).  Though I do love this wildly popular song, it's not among my favorite Sondheim songs.  But this instrumental jazz interpretation nearly left me weepy.  It was woody and soulful with much of the melody carried in the deep resonances of the baritone saxophone.  An absolutely haunting rendition.

I really can't overstate was a deeply moving and joyful evening this was.  One of the things that I love most about live theater is that we, as members of the audience, get to participate in a moment.  We get to share space with talented people and ideas.  This felt like such an important "moment" in the history of musical theater.  As I said at the outset - I still sort of can't believe that I got to be a part of it.

My sincere hope is that the producers will have the wisdom and foresight to release an audio recording of this production.  As thrilling as it was to hear it, it would be equally disappointing to imagine that I might never hear it again.