FCS: A Gentleman's Guide to Love and Murder 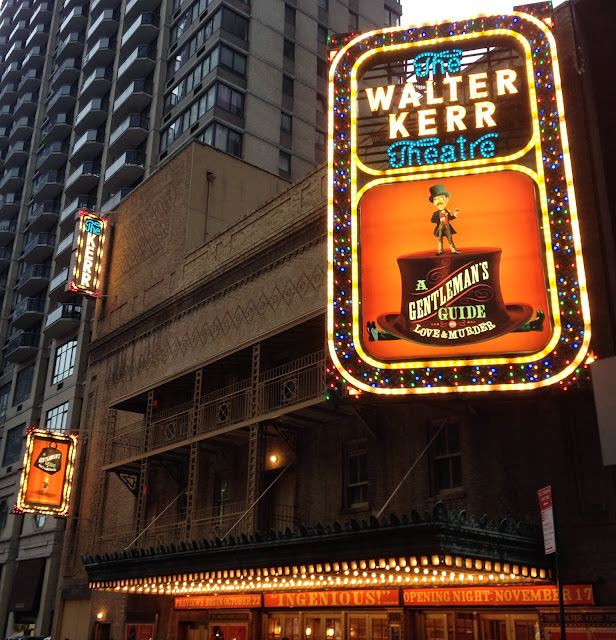 Synopsis: An Edwardian-set musical comedy about a man attempting an unlikely rise through the aristocratic ranks in England.  He is aided by chance, but does his bit to "assist" chance a bit as well.

My thoughts: A Gentleman's Guide to Love and Murder is a delightful, and delightfully original new work on Broadway.  It made its way to Broadway after out-of-town runs first at the Old Globe Theatre in California and then at the Goodspeed Opera House in Connecticut before making the Broadway transfer this fall.

A rare treat in the current age of the Broadway musical, Gentleman... is truly a musical for musicians.  It is cleverly written in every aspect: wryly funny, smart musically, and with a tightly designed book.  It is masterfully performed by a team of highly skilled and artful singers - which is perhaps most surprising among its many attributes, in this current age of the "pop sound" that's so prevalent on Broadway.

Don't get me wrong - I'm not attacking the rise of pop music and singers on Broadway.  I loved Newsies, Rent, Wicked, many others...  But it is a bit of an increasingly rare treat to hear truly excellent, classically styled musical performances from the Broadway stage!

The cast is led by headliners Jefferson Mays and Bryce Pinkham.  Mays receives much attention as the Tony award-winner who plays a stunning eight roles, but equal accolades should go to Mr. Pinkham in the role of Monty Navarro - around whom the story revolves.

As stunning as their performances were, they were matched in the enviable talents of the entire cast.  This is one of those rare ensembles that benefits from a strong cast at every angle.

One of the highlights of the production was the beautiful scenic design by Alexander Dodge.  He captured the Edwardian era completely and sucks the audience into the world of Monty Navarro.  The sets were a match to the superb, complex, and layered musical score (by Steven Lutvak).  It brought me back to my earlier theater-going days when I was regularly awestruck by the magic of changing sets.  Of course I knew that I was in the same place, and the stage hadn't moved, but with the revelations of each new scene I felt magically transported to a new world.  The book, by Robert L. Freedman, gave Mr. Dodge a lot with which to work, and his designs magnificently rose to the challenge.

The one area of disappointment in the creative design team was the projections by Aaron Rhyne.  They weren't a complete failure, but the work failed to live up to the standards of excellence embraced by all the other aspects of the performance.  There were a few moments when the projections were a bit over-the-top - I recall a moment where large Union Jacks were distractingly projected...  Fortunately, that wasn't the norm, but even when not over-the-top, the work was generally uninspiring and did little the advance the story.

My biggest fear about this production is that, on the whole, it may be a little too smart for most Broadway audiences.  It's the kind of show that serious musicians and serious theater aficionados will love, but I'm afraid the tourist crowd - with limited opportunities and time frames, and a penchant for the more familiar - might not gravitate to Gentleman... enough to keep it afloat for long.

But don't let the box office numbers fool you - A Gentleman's Guide to Love and Murder is a magnificent execution of a magnificent show.  While it may not be destined to join the ranks of the legendary productions we all know and love, it probably should.