Advent in the middle of nowhere 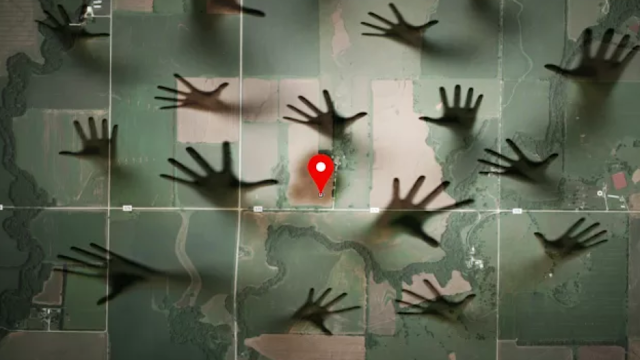 A couple of years ago I read an article about a person who lives in the center of the country – or at least at that place that most online maps identify as the center of the country, a rural area in northern Kansas.  The bizarre thing about her experience, was that she found that living at that point – which, otherwise, might have been described as the middle of nowhere – in the age of the internet, she had made become the target of criminal investigations, and harassment of all sorts that she never could have imagined.

Let me back up for a second.  Every internet device that anyone uses is assigned a unique series of numbers called its IP address.  This includes your computer, your smart phone, your wireless printer, maybe even your car! – anything you own that’s connected to the internet.  Back in 2011, a company began mapping these addresses to help advertisers direct their marketing online more closely to their intended audiences.  The maps can sometimes get very specific – down to a particular street address.  But most often, they’re more general than that – just pointing to a particular city and state.  For some servers, however, it’s almost impossible to map the IP address more specifically than to just its country of origin.

That’s where this property in the “middle of nowhere” comes in.  It just so happens that the company mapping IP addresses randomly dropped a pin near the center of the map to represent the United States.  And that “pin” – if you zoom in on the map far enough – happens to be on this lady’s property.

So, when the FBI is investigating criminal activity online in the United States, and uses the IP address map to locate the perpetrators, often, this house comes up as the location.  She’s even told stories of receiving phone calls from irate people wanting her to stop emailing, or accusing her of engaging in marital infidelity, and all sorts of other things.

Her family has owned this property for three generations, and up until about 8 years ago, it was a quiet, easily forgettable place.  Suddenly, in the age of the internet, it has become an unintended hub of the world’s focus.

In the Gospel of Luke, the Judean wilderness is the first-century equivalent of that pin in the map.  It’s that part of the region that didn’t matter – at least not to the people in charge.  It was outside the realm of the circles of power; beyond the spheres of influence.  It was as if the Gospel of the coming of Christ were to be announced in an isolated field in Kansas where the nearest neighbor was a mile away.  And John the Baptist dropped the pin – sending the world’s focus to this place that, otherwise, wouldn’t have ever been noticed.

It’s significant that that’s where the story of Jesus gets started.  The message of Christ didn’t come into the world in a vacuum.  Jesus wasn’t foretold in a church or a synagogue.  We weren’t warned to prepare from the rotunda of an impressive building that represented the seat of all political power.  The first sign of Christ came in the wilderness.  In a place that most of the people in charge would say didn’t matter.  And from a person that almost everyone just knew didn’t matter.

But, as if to highlight the counterpoint, Luke tells this story of the wilderness by first fixing the story into the context of the secular and religious powers of the day.

“In the fifteenth year of the reign of Emperor Tiberius, when Pontius Pilate was governor of Judea, and Herod was ruler of Galilee… during the High Priesthood of Annas and Caiaphas…”

These were the power players of the day.  They were where you’d expect the pin on the map to drop – in the middle of the movers and shakers.  The place where our attention is naturally drawn.  But the message of Christ first comes from “the voice of one crying out in the wilderness”.  That’s where this story starts.

After two millennia, and our own lifetimes of observation, it’s easy to miss that.  It’s easy to miss the radical way that God declared that “all flesh [would] see the salvation of God.”  But it’s important to remember. Not just the leaders, or the influencers.  Not just the wealthy and the elite.  Everyone.

A friend of mine reflected earlier this week on the funeral service for President Bush at the National Cathedral.  He talked about the comfort he felt in recognizing that those beautiful words from the Book of Common Prayer – the same words that usher Presidents and other Figures of State through their final journey on earth to their resting places are the same ones that he uses when called to usher others – both pillars of the church and paupers, left unloved and alone.  The same words that will one day be used to usher him on that same path.  Words that work for the humble and the great and all those others of us in between.

That’s the message that’s coming.  That ALL flesh shall see the salvation of God.  Even though we exist in the real world – with its powers and influences and leaders – this message of salvation isn’t just reserved for them.  It’s even for us.  The Word of God is all encompassing – even more so than the words of our prayers that are made to reach both high and low.  The Word of God does even more – reaches even farther.

That’s the promise.  That’s the hope that the Advent of Christ represents.  A hope that even we will be given the chance to see and to know the glory of God.  We live in that hope.  Amen.
St. David's; Kinnelon