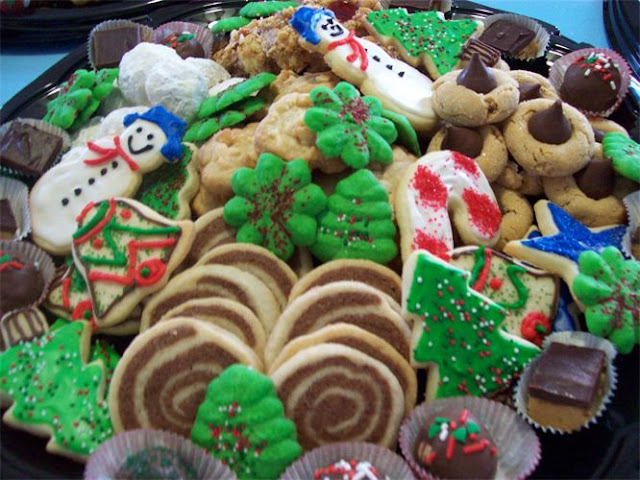 In the name of the God of stones, and flesh, and love.  Amen.

Once upon a time, I had a parishioner who would give to me, around this same time each year, a tin of homemade cookies.  It included a variety of cookies that she’d obviously dedicated a lot of time to – making sure that each tin had the perfect mix of all the different kinds she’d made.  The first time it happened, I was overcome with tenderness, as I considered the hours of labor and love that went into that collection.

And it really was a lovely thought.  The problem came when you’d bite into the cookies…  There were these lovely little balls of white, covered in powdered sugar – looking very enticing.  But then you’d bite in to discover the taste of licorice.  Now – I don’t mind licorice, and I know that’s a particular kind of cookie that some people love, but licorice it’s one of those tastes and sensations that one should be prepared for.  As a “sneak attack” it doesn’t land well.

Even among the others, there was always some sort of disappointment.  Those peanut butter cookies with the Hershey’s kisses in the middle?  You could break your teeth on them if you weren’t careful.  The cute Christmas cookies cut into all sorts of shapes of the season?  Desert sand wasn’t as dry.  It was probably sweeter, too.

Tins of hers would show up around the church every year.  It was such a kind gesture, and no one wanted to hurt her feelings, but it became something of an inside joke around the church – everyone trying to re-gift the cookies to everyone else!  It was like the southern humorist, Lewis Grizzard, once mused about fruitcakes: he supposed that there was really only one fruitcake in the world, but that people keep passing it around to each other, because no one actually wants to eat it!

I’ve always loved cooking.  Even as a small child, one of the best ways my mother could ever reward me for good behavior was to give me permission to cook something.  When I was very little, she would stand with me and guide me through the process of scrambling an egg.  But as I grew, so did the projects I was allowed to take on: baking cookies, frying beignets, learning to make gumbo…  By the time I was in middle school, I’d learned to bake bread from scratch.

As I’ve matured, one of the things I’ve learned about cooking is, just following the recipe isn’t enough.  You can make almost anything by following a recipe, along with learning a new technique here and there.  But to make something truly delicious – the kind of thing that people will remember and crave – you not only have to have the right recipe, you not only have to know all the right techniques involved in executing it, but you also have to have the right ingredients.

The outcome always depends on what goes in.

The thing is, even though my cooking works that way, all that God creates and makes possible in this world doesn’t.  The ingredients don’t matter.

In the ongoing saga of John, the Baptist, today we hear him crying out to the people, “You brook of vipers!... for I tell you, God is able from these stones to raise up children to Abraham.”

Even stones provide material enough for God to accomplish all that God has in store.  How much more could God do with us – people who are striving to be the best for God that we can be?

One of the most troubling things I’ve come to know as a priest – more troubling, even, than some bakers’ cookies – but in all seriousness, one of the most troubling things I’ve learned in my years as a priest is how often people express a feeling of unworthiness when it comes to talk of God and the church.  More times than I could number, people have met me as they approached the church door – particularly at this time of year – and joked about how they feared the church would fall in on them when they entered.  But, buried not very far beneath that humor is a deeply-engrained sense that many of us hold that we just don’t cut it.  We’re just not good enough.

For too many years the church, as a whole, has encouraged – if not, even spawned – that thinking.  And, I suspect, that one of the reasons this time of year is so stressful for so many people is because of the underlying influence of the church.  Even if Christmas has become a largely secular observance for many people, it still has, in its DNA, the roots of our faith.  And this is the time of year that many people who would never otherwise encounter it, begin to encounter thoughts of church, faith, spirituality, and doubt.

I suspect that some of the pressure many people feel to make the holidays reach some impossible ideal comes, at least in part, from an underlying fear of not being quite good enough.

Yet, even stones can be used by God to build nations.  How much more could God do with us?  That’s the message of the Advent of Christ and its coming Incarnation: even flesh could be used by God to bring a savior.  And we all have flesh.  We all have the makings of God’s handiwork already at our disposal.

My former parishioner’s cookies were, quite frankly, disgusting.  But she wasn’t.  She was kind, and filled with love.  While that may not be good enough to bake, it is good enough – and a lot more than is necessary – to be worthy of God’s love and capable of doing God’s work.

I hope the coming holidays are every bit as meaningful and beautiful as you’re all hoping they will be.  But no matter what happens, whatever the disappointments or thrilling successes, that doesn’t define our value or our worthiness.  God has already done that.  We’re already good enough, and already loved.  Amen.
St. David's; Kinnelon