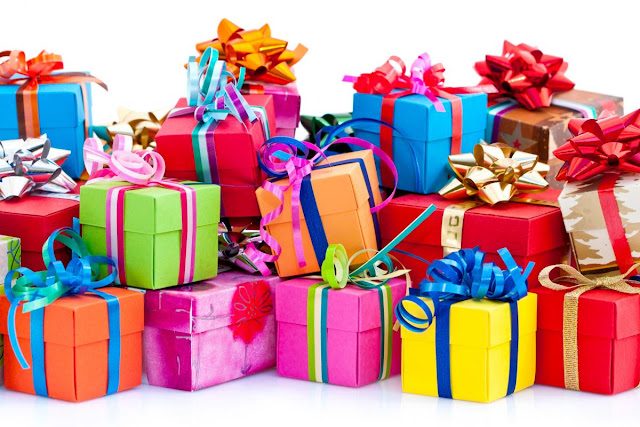 In the name of the God of surprises, and wonders, and gifts unfathomed.  Amen.

One of the things that’s really fun about this time of year, is that it’s a time that’s set aside – almost universally throughout our culture – when it’s a little bit more okay to be immature – in all the best possible ways.  It’s a time when our inner children are allowed out to see the light of day – to peak beyond the veils of seriousness and adulthood and responsibilities, to help us see magic; and to help us dream.  The Christmas season – even for people that have nothing to do with the church – makes all of that possible.

In our household, Michael and I let our inner-children out pretty regularly, but at this time of year, we can be a little more open about it.  We can give ourselves over to playfulness and silliness even more than normal.

I, on the other hand, take just as much delight in seeing to it that he CAN’T figure out what’s inside.  One year, each gift – at least the bigger ones – led to a scavenger hunt around the house.  What started under the tree, took us everywhere from the attic to the basement before the gift was finally revealed.  Another year, Michael was directing the musical Hair, and I gave each gift a clue about what was inside, and all the clues were lines from the show.  No matter what – every year, boxes are the wrong size, or weighted, or padded, or have some lose change dropped inside – all to try to obscure the real contents.  Because this is the one time each year when the waiting and the mystery turns out to be half the fun.

But waiting isn’t always fun.  And sometimes, what’s unknown is scary.  Christmas is a time for our inner children to explore, but for Mary and Elizabeth, that first time it wasn’t so light and the joy wasn’t so obvious.  Even so, they could sense that what was coming meant something that was, as yet, un-shown.  They could sense that the package of their experience didn’t quite reveal the contents of what was to come.

As they came together, the child, who would be John, leapt in Elizabeth’s womb.  And both of the women were overcome with the Holy Spirit and proclaimed the greatness of God.

The Magnificat – that Canticle we sang earlier – has come to mean so much to people through the years because it does proclaim the greatness of God: a greatness that can’t be contained in simplicity and conformity to all that’s expected.  It’s greatness that stands out, and carves out a new world order.

One of the theologians that I read in preparing for today described the Magnificat as a “Vindication Poem”.  I suppose there’s a degree to which that’s true.  It does proclaim that God, through Christ, will come to rectify the wrongs of the world.  But what I love best about it is that is shows the chaos of the Christ moment.  It shows that the nature of Christ is to turn the world on its head – to make us see everything that we thought we knew in a new way.

Having Christ in the world and in our lives is like figuring out what every one of those boxes under the tree holds – about knowing the answers without a shadow of a doubt, and then, on Christmas morning, still being surprised.  Because everything we thought we knew was less than a shadow of what we’d come to learn.

“He has cast down the mighty from their thrones, and has lifted up the lowly.”

“He has filled the hungry with good things, and the rich he has sent away empty.”

I may not know what’s under the tree.  I certainly don’t know what the future holds.  But what I do know is, whenever we look for Christ, we’ll always be surprised by what we find.  The packages are certain to look different than we’d expect – because that’s the way God works and has always worked.

As we wait, and expect, and deign to let the little child within each of us lure us into embracing the wonder of this moment, yet again – remember to look for the unexpected.  Remember to look for Christ.  Amen.
St. David's; Kinnelon