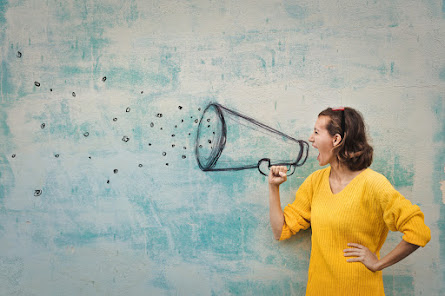 Gracious God, give us voice: to call out injustice, to call your church to compassion, to call the world to join us in following Christ.  Amen.

Last week we heard Jesus calling us to calm.  “Peace!  Be still!”  That’s what he said to the sea, and it’s what he says to us.  “When the storms of life are raging, stand by me.”  That’s where there is safety.

This week, however, the Gospel tells us that Jesus is now back across the sea – back to the land of all that was familiar to him; back to the region of his own home and his own people.  But the calm has not lasted.  In fact, he seems to be mired in frenetic activity.  Crowds are pushing in around him – begging for healing, demanding blessings, clawing at him for just a moment of his time.

These aren’t stories about how Jesus gave favor to the oppressed one – though there are plenty of stories where Jesus does just that.  No, in this story, the leader’s request is granted just as surely as the poor, dejected woman’s request was.  But despite all of the differences between them: class and social standing, gender, wealth, religious purity – the thing that ties them together is a willingness to speak up.  To advocate for their own needs and to reach out to Jesus to meet those needs.

Speaking up is very often discouraged in our culture.  It’s often even drilled into us in our earliest years – when many of us heard that children should be seen and not heard.  But speaking up effectively can be a great way to follow Jesus.  Jesus often spoke up and freely pointed out how we could be better and do better.  It can be a holy act.

That kind of holy act can stir things up.  It can destabilize the status quo – in other words: it can upset the established power structures, it can cause us to reexamine and reevaluate them.  That’s the kind of speaking up that Jesus was known for, and in this story, especially, it seems to be the kind of speaking up that Jesus favored.  The two who dared to speak up were the ones who had their needs met: the religious leader who spoke up in faith to Jesus, someone the religious establishment feared; the woman who spoke up claiming her own claim for healing, even though most thought she wasn’t worthy.

I heard a story recently about a young pastor in another denomination.  She had recently arrived at the congregation she was to serve when the church council quickly determined that, because of her “youth and inexperience” they needed to work hard to mold her into the pastor they wanted.  They decided to hire an expensive consultant to come in and work with the pastor to point her (and the congregation) on a path to stability and strength.

Well, after the consultant had worked with the pastor and studied the congregation, the verdict was clear: the young pastor was on the right track.  She was leading the congregation away from some old habits that had held them back and threatened them in the past, and trying to forge a new way that would be strong and healthy.  The one bit of advice that the consultant shared with the church council was that they needed to be extra vigilant about not falling into their old patterns of conflict and sniping at one another and their leaders when they didn’t get their way.  If they could just do that, the consultant’s prognosis for the congregation was that it would remain strong into the next decade.

With the mandate from the congregation’s own consultant, the young pastor continued to lead as she had been.  The problem is, leading invariably ruffles feathers.  Leading is a kind of “speaking up” and it implies calls for change.  It implies moving away from something of the past toward something different of the future.  It wasn’t long before some in the congregation became frustrated by leadership that spoke up against their way of doing things and they fell back into their old patterns of sniping and complaining, and before long the church was embroiled in conflict.

When the consultant returned for a follow-up meeting with the congregation, the prognosis had grown quite grim.  What had promised to be at least a decade of impactful ministry had evaporated, and the church was entering crisis mode.

So much of our culture and our communities are just like that congregation.  No matter what we say, our actions consistently imply that we want to maintain the status quo.  We want to hold steady and avoid change – we want to avoid upsetting the apple cart.  We don’t want anyone to speak up if it challenges us.  Because speaking up and speaking out can be dangerous.  It can cause movement and change.  And when movement and change happen, who knows where we’ll land?  It won’t be where we were.  But that is precisely why Jesus spoke up so much, and it is precisely why Jesus celebrated that so much in others.

When Jairus called, Jesus answered.  And when Jesus felt the power flow from him to the sick woman, and he called out for answers, she spoke up; and, she was blessed and praised for her faith.  When the mourners around Jairus’ house insisted that they knew the girl was dead, and they knew that nothing could change that, Jesus spoke up.  They laughed at him, but Jesus spoke up and said, “Little girl, get up!”

Christ is saying the same thing to us right now: little girl, get up.  Show the world that through Christ, we can do a new thing.  Meet everyone who said that we were dead, and look them in the eye and show them they were wrong.

Dare to lead and dare to change.  Don’t just rest where we’ve been, because it’s not getting us anywhere.  While change and growth may leave us not knowing where we’ll land, we know that if we’re following Christ we’ll at least be falling in the right direction.  Amen.