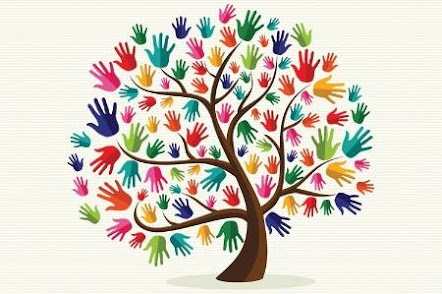 May God our creator root us and strengthen us.  May God in Christ cause us to grow.  May God as Holy Spirit help us to spread blessings far and wide.  Amen.

One of the things that Michael and I love about living on this property is the room it gives us to spread out.  Both of our dogs are older now, and one of them can’t really handle long walks because of his various health conditions, but when the weather’s nice and it’s not too hot for them, we love to take the boys on short walks around the church grounds.  It’s big enough for them to feel like they’ve been somewhere, but small enough to give us limits so we don’t accidentally cause them to overexert themselves.

On one walk earlier this Spring, we were in front of the church, in the grassy area around the sign along Kinnelon Road, and I looked down and noticed hundreds of red maple saplings that had grown from the scattered seeds of the tree out front.  It was before the first time the grass was mown this season, and my mind instantly began dreaming of the potential those little sprouts held.  I imagined the lush, red bank of trees that would grow up there if we left nature to take its course.

I thought of that image again this week as I reencountered these familiar parables about seeds and sprouting and God bringing forth abundance out of seeming nothingness.  We heard two short parables about God giving growth, and how that’s mirrored in nature.

In the first parable, Jesus says that in God’s dream for us, it’s like what happens when a farmer scatters seed.  When that happens, there’s only so much that the farmer can do.  But, in the miracle of God’s ongoing creation, those seeds sprout, and take root, and eventually bring forth abundance – abundance that is then enjoyed by the farmer.

In the second one, Jesus tells us that God’s dream for us is like the mustard seed: small and seemingly insignificant at first.  But when it’s allowed to grow, its significance starts to show.  It becomes so much more than it initially appeared to be.  It becomes so much that it can even become a home for God’s creatures to live in it – a place for them to center their world and find protection.  All from the tiniest beginnings.

In this life it can be very easy to feel like each day is just a sort of slog from one to the next.  It’s hard to see growth happening, because it’s so slow.  It’s only in those rare moments in our lives when we can look back and have the right perspective that we can really see how we’ve grown.

And the pandemic, if anything, has only complicated that.  To be honest, a lot of this past year and half hasn’t felt like growth, as much as it has felt like a sort of global slash and burn.  Things we’d counted on can no longer be counted on.  Much of what we had thought was our security has proven to be illusory.

But even in this time, there has been growth.

It’s probably all still a little too fresh to really see, but if we look closely, we can sort of start to make out the saplings.  We’ve been pushed in ways that we’ve never been pushed, and we’ve been forced to reevaluate things that we’d previously taken for granted.  We’ve had to take stock of what was really important and find ways to keep those things going and growing.  And we’ve cut back some things that we found we could live without.

We don’t have the full picture yet.  It may be a long time before we do.  But our faith tells us that even in the midst of challenges, God is creating and bringing growth in ways that we can only barely understand – if we can understand them at all.  Even in times when the whole world seems fallow, God is planting seeds that we don’t even see.  And when God plants the seeds, abundance is sure to follow.  That’s just the nature of it.  That’s the essence of how God interacts with us.  When we persevere in faith we can come to see that those seeds have become so much.  So much that they can even become a home for us – a place for us to center our world and find protection.  All from the tiniest, unseen beginnings.

When I think back on those red maple saplings that are now long-ago cut down, I realize that I knew it wasn’t meant to be.  I knew that warmer weather would come and we would start mowing there again, and the promise of our little red forest would soon fade to memory.  And I also knew that all of the saplings I saw couldn’t possibly mature into the full trees.  There were hundreds of them.  There wouldn’t be enough earth and nutrients and sunlight to sustain them all.

But even so, to me at least, those saplings represented hope.  They showed that time was marching on – that future is still unfolding.  Even in the midst of all the ways that our lives have slowed and changed over the past year and a half, life wasn’t really stagnant.  It might have felt that way for a while, but life was still pushing through – literally pushing through the earth in those saplings – and pushing through our experiences to birth something entirely new.  Something that now seems very small, maybe even un-seeable.  But something still emerging, that through the grace of God can grow in ways that we cannot yet imagine.  Something that God dreams for us, that we dare not dream for ourselves.