Sure and Certain Hope 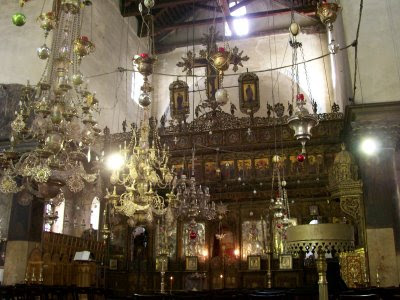 In the name of God: Father, Son, and Holy Spirit. Amen.

When I was in Bethlehem, my eyes were opened. I “saw the light”, if you will. When I saw the harsh conditions under which the Palestinian people were living my heart was opened and I saw their suffering with new eyes. I knew in a deep way, like the Magi of the tradition, that I, too, would be called to go home by another road. I couldn’t go home and continue to ignore the plight of the people that I had seen. I couldn’t live as a Christian leader without bringing attention to the injustice that I had seen.

I wish I could preach that sermon again.

Better yet, I wish I hadn’t preached it a year ago. Because, in light of the ongoing strife between the Israelis and the Palestinians, it needs to be preached today, perhaps even more than then.

Once again, the Palestinian people are suffering. Their life under Israeli occupation continues to be incredibly harsh. In recent days Palestinians living in Gaza have been subjected to ongoing air assaults. More than 430 Palestinians have been killed, including many women and children. Yesterday, Israeli troops on the ground invaded Gaza, and the death toll is likely to begin increasing rapidly before a resolution is found.

I have to admit. All of this news surprised me quite a bit when I first heard about it. Just a week or so ago I was reading news reports from Bethlehem that told of more safety and stability in the region. Tourism had begun to return and the Bethlehem economy was slowly revitalizing. The very Christian groups who often fight amongst themselves about the use of shared holy spaces even had an ecumenical worship service on the first Sunday after Christmas in the Church of the Nativity. There seemed to be some genuine cause for hope.

Unfortunately, that’s often the way it is in our lives. Just when hope begins to peak through, something on the horizon seems to be threatening it.

Just think of the story that we are engaged in right now. The new year has begun. We started back in December with the season of Advent – a time set aside for the cultivation of hope. We spent those weeks rehearsing the story of God’s role in our lives throughout human history and at the last, on Christmas, the baby was born. The hope that we had been working at cultivating had become flesh and dwelt among us.

But today, in the story of the Magi, or the Wise Men, or the Three Kings, we hear that hope, even in its infancy, is threatened. The Savior of the World has been born, but the story that we hear today tells us that the power-hungry forces of the world wanted him dead. Rather than the Incarnation of Hope that he was meant to be, we hear that King Herod feared that Jesus might interfere with his own lust for unfettered control. In their wisdom, as the story goes, the Magi left by another road. They didn’t want to collude in Herod’s agenda, so they avoided him after leaving Bethlehem.

In the episode that follows what was read this morning, the writer of Matthew’s Gospel tells us that Mary, Joseph, and Jesus fled to Egypt as refugees to wait for the threat to pass.

Just when hope comes into focus – just when we begin to get comfortable – something comes along to unsettle things. And it’s then – when we’ve dared, often against our own first instincts, to allow ourselves to settle into the hope – it’s then that the unsettled times of life can seem the most piercing.

Christmas is such an unnatural state for us. It makes sense that we would enter it gradually – cautiously, even – but why must we leave it so abruptly?

It’s the way life is. There is hope. There is love. There is indescribable joy. But there is also pain and suffering.

Later in Matthew we will hear that Jesus said of the law, “I have not come to abolish, but to fulfill.” Though that statement is about the Christian responsibility with regard to Jewish law, I think there is something of a truism in that about Christ’s role in many aspects of our lives.

We might sometimes wish it were so, but the stories of our tradition and our own experiences in our lives have proven again and again that our understanding of God’s interaction in human history is almost never about God swooping down from on high to wave a magic wand that would fix the problems that we humans have gotten ourselves into.

The same is true of Jesus. We don’t celebrate that Christ lives among us because the problems of our lives have somehow been magically abolished. We celebrate that Christ lives among us because through Christ, we see the God who creates us and the Holy Spirit who nourishes us a little more clearly. Through the clarity offered in Christ our earthly troubles are not abolished, but we are, nonetheless, more fulfilled.

But the message of the Gospel, and the story of Christ in our lives, turns that upside down. Through Christ, hope is at the center of our experience. It will undoubtedly be true that interruptions of suffering will be a part of our experience, but it is the hope that abides.

In the Christian story, even death could not interfere with the persistence of hope.

The hope that encircles us is real.

It is as real today in Gaza as it was in Bethlehem on Christmas Eve.

Hope is as real for us today in the midst of all of the uncertainty in our lives as it ever was. Think of your most hope-filled moment. Was it at the start of a new job? Was it the first time you held your newborn child? Was it in the early days of a new love?

The interruptions of life may well have distracted you from that hope, but hope is still very real. Even through the interruptions and distractions, we are a people of “sure and certain hope”.