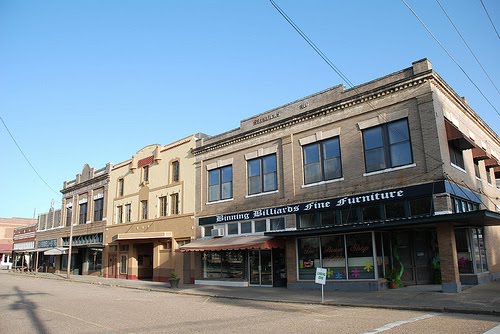 Anyway - today was Youth Sunday at St. Paul's.  This kids gave reflections on their mission trip from this past summer in lieu of a sermon at the 10:00 service.  It was great!

This is a little homily that I preached at the 8:00.  And the picture to the right is of the ACTUAL Mansfield, LA!

Whenever I hear the story of “Blind Bartimaeus” my mind always drifts back to Mrs. Reisinger.

When I was in the first and second grades, my family and I lived in Mansfield, Louisiana. Mansfield is a small town of about 5,500 people just south of Shreveport, Louisiana. Though we were only there for two years, we made many memories and built many relationships that persist even these nearly-25 years later.

Mrs. Reisinger was our next-door neighbor. She was 98 years old and lived alone in her magnificent old Southern mansion on the main street of town. I was always the kind of child who related easily with people of different generations, and Mrs. Reisinger and I became quick friends.

Very often, in the afternoon, I would walk next-door to Mrs. Reisinger’s house for a visit. She would offer me fresh baked teacakes that she always seemed to have just made, served warm with cold lemonade. We would spend hours talking about nothing in particular. Knowing me, I’m sure I provided her with whatever updates and insights my 7-year-old mind had come up with. But the highlights of our visits for me were always her stories. In her almost a century of life, she had seen more than my young mind could imagine.

And though she was blind by the time I knew her, she had an ability to help me to see what she could only see in her mind’s eye.

My relationship with Mrs. Reisinger taught me many things. She awakened in me a curiosity for history – and particularly the real stories and feelings of the people who lived that history – a curiosity that still continues to shape who I am and how I see the world. She was a vigilant participant in the “village” that it took to raise this child – teaching me manners and courtesy through our interactions. And as I look back on our somewhat unlikely relationship, I recognize that she helped to teach me that there was value in both sight and insight. Though Mrs. Reisinger had lost one, the other remained as sharp as ever.

This is one of the lessons of the story of “Blind Bartimaeus”.

In the biblical world, it was common to see physical infirmity as a punishment for human sin. Throughout the stories of the healing miracles of Jesus, we see again and again that Jesus didn’t see things that way. One of my favorite gospel songs says it like this: “The justice of God saw what I had done, but Mercy saw me through the Son – not what I was, but what I could be, that’s how Jesus saw me.”

Bartimaeus may have been without sight, but he was not without insight. He could see Christ in a way that others couldn’t and had faith sufficient to want to follow him.

Bartimaeus’ sight seems significant. Jesus says, “Go. Your faith has made you well.” And Mark tells us that Bartimaeus immediately regained his sight and followed Jesus on his way.

Last week Elizabeth spoke to us about the difference between “Servant Leaders” and “Team Players”. Another word for “Team Player” – at least as its often interpreted as an ideal – might be “blind follower”.

But Jesus never lifted that up as an ideal.

We’ve seen in over and over again in the past few weeks:

Jesus’ command to the rich man who wants to enter the kingdom of heaven: sell everything you own, give the money to the poor, and follow me. It’s easier for a camel to pass through the eye of a needle than for a rich man to enter heaven.

When James and John were lobbying for prominence and greatness because of their association with Jesus, Jesus laid the cards on the table: can you drink from the cup from which I drink and be baptized with the baptism with which I am baptized? It won’t be easy. And even then you may not get what you desire.

We also heard: “The Son of Man is to be betrayed into human hands, and they will kill him. And three days after being killed, he will rise again… Whoever wants to be first among you must be last of all and servant of all.”

The work of following Christ is hard. It may put you in harm’s way – as countless Christians martyrs can attest. It may cost you earthly pleasures.

So don’t just follow blindly. It’s much too important.

Following Christ is important. So much so that it requires every drop of insight and faith that we can muster. It requires disciplines of servanthood and leadership, because the lures of this life are great.

Mrs. Reisinger died a few years after we moved away from Mansfield. Though many of the stories that she told have faded with the passing years, the insight that she helped to pass on to me continues to live.

She was a living Bartimaeus. A Christian whose insight surpassed her eyesight.

We should all be such Servant Leaders.