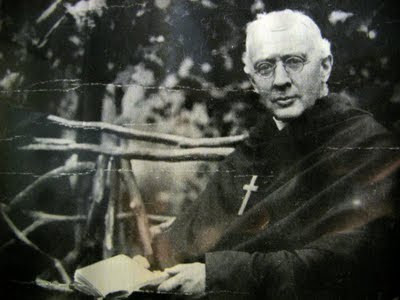 ** NOTE: In our parish we have a mid-week Eucharist on Wednesdays (at 7AM - eek!).  Our practice is to use the propers from the preceding Sunday.  It is also our practice that the preacher on Sunday will also be the preacher at this service.  Whenever that's me, I like to try to incorporate the observance of whatever Feast Day there is, even though we're not using the propers of the day.  I usually don't use a full manuscript for this service, but this morning I did use some quickly sketched notes, so here's a recreation of what I said...

Today we celebrate the Feast of James Otis Sargent Huntington.  Born in 1854, he was the son of the first bishop of the Diocese of Central New York.  When he was 26 years old his father ordained him a deacon and then later, a priest.  Not too long after that, while he was on a retreat in Philadelphia, Huntington began to discern a call to monastic life.  He considered joining the Society of St. John the Evangelist - an English order that had recently established a province in the United States, but instead he felt more called to found a uniquely American order.

Along with two other priests, he established the Order of the Holy Cross.  They began their work of prayer and service to the poor with the sisters of the Community St. John Baptist in New York City.  Eventually, the two who initially began working with Huntington in the order decided to leave.  One, because the rigors of monastic life were taking a toll on his health, and the other, because he discerned a lack of vocation.

Even in the face of this initial setback, Huntington continued in his work and eventually professed his life vows.

Soon, others joined him and the Order of the Holy Cross began to grow.  The order moved from its initial work in New York City a few times before settling in West Park, New York in 1902.  The West Park location remains their primary house.

While studying the life of James Huntington, it was interesting to me to notice that his life was book-ended by some of the most turbulent times in American history.  His early years were shaped by a country embroiled in Civil War.  The last years of his life were during the Great Depression.

On Sunday, I talked about the different language between Pilate and Jesus: they were each coming to their meeting from such vastly different perspectives that they were hardly able to communicate.  They were only barely speaking the same language.

Christians continue to face challenges in communicating with the larger world.

Huntington serves as an example for us, because he used his life of devotion, prayer, and service to the poor to help bridge the chasm that can sometimes exist between the troubles of the world and the hope of Christ.

This is the gift of the monastic tradition: in their lives, they give us that example.  We aren't all called to the Religious life, but we are all called to build those same kinds of bridges where we can.  Like Huntington, we can use our own lives of prayer and service to build bridges between the very real troubles of the world and the hope that we know in Christ.  Amen.
St. Paul's; Chatham