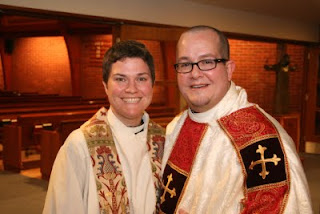 The chasuble and stole, in which I was vested after being ordained, were designed by me.  My mother came to visit this summer for the sole purpose of going with me into the city to help me to find the right fabrics for the design that I had in mind.  She and my father purchased those fabrics and other adornments and we sent them to my Aunt Ginny who constructed the chasuble according to my specifications.

It really is quite remarkable.  Aunt Ginny, I am sure, had never even heard of a chasuble.  And yet, when I asked her to make it, she easily agreed.

She is, of course, an accomplished seamstress.  But she didn't do it for the love of sewing.  She did it out of love for me.  Whenever I wear it I will feel that love - worked into each stitch of the garment that was produced almost entirely by hand.

I have said from the beginning of thinking about this chasuble that my hope was that it would be "traditional, but not off the rack".  Eventually I began to realize why that was so important to me.  It's like the kind of priest that I hope to be: honoring and respecting the ancient traditions of the church - taking my share as a priest of those ancient traditions - but still new and unique in a way that honors the new work being done by God through me.

I will be forever grateful for this gift from Aunt Ginny.  The gift not just of a garment, but of a symbol for my dreams for my priesthood. 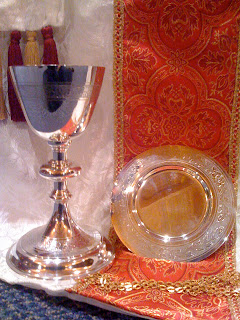 Another significant gift was my chalice and paten.  My cousin Robby had the idea of getting my cousins and aunts and uncles together to give the chalice, and my parents gave me the paten.  It was a gift from all of them on that side of the family.  And if that weren't special enough, they passed a card around between them - despite being scattered around the country! - and included that in the gift.  It was almost even more special.  Even those few who couldn't be with us for the ordination, were able to be there through their words.

It's amazing - the giving of a Eucharistic vessel.  I'm young, and I expect to be a priest for a long time.  I expect that I'll stand at many different altars and hold many different Eucharistic vessels as I preside at the Eucharist more times than I'll be able to count.  But these vessels will go with me.  They will hold the body and blood of Christ - as it is known to us in the breaking of bread and as it is known to me in the love of my family and community.  They are beautiful, but nowhere nearly as beautiful as the love that they represent. 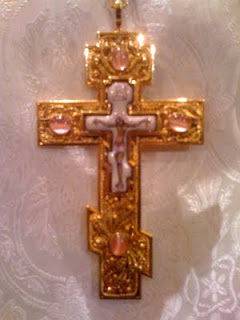 Finally, I was given this pectoral cross.  It belonged to the Rt. Rev. Frederick Wolf, the Sixth Bishop of Maine.  Bishop Wolf was the bishop who ordained my friend and mentor, the Rev. Elizabeth Kaeton.

As I understand the story, +Fred was initially reluctant to ordain Elizabeth+ out of a fear that she would be "an embarrassment to the church".  To our great fortune, he eventually came around and ordained her.  But she took that calling seriously and has worked tirelessly for more than 23 years to prove him right - to embarrass the church everywhere that it needed it and to call it to repentance.

When +Fred died, his pectoral cross was given to Elizabeth+, along with his prayer book.

Elizabeth+ gave me that cross on the day of my ordination as a priest.

I will treasure it for the rest of my life, and hold it as a symbol of the mark that Elizabeth+ has left on my own priesthood.

The common thread which runs through all of these gifts is that of love and community.  That community raised me, both in my family of origin and its extensions, and in the larger family of friends, colleagues, and mentors.  It continues to raise me and to love me.

That's the love and community to which Christ is calling us.

I know about love and community and family and support.

But when I forget, I'll have some outward and visible signs to remind me.

Maybe it is all too much.

But so is the love of God.  I am so grateful for that abundance.

Here's a picture of +Fred - a scan of a photo of a portrait (hehehe...) given to me this morning by Elizabeth+.  I hope you'll enjoy it as much as I do. 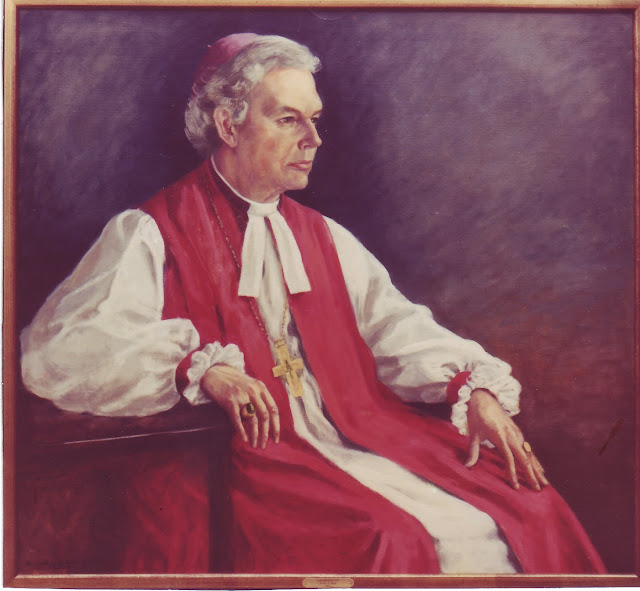 Elizabeth Kaeton said…
Thank YOU, Jon. You don't know it yet, but YOU are the gift to the church. In my very rare moments of despair, I look to you and Meg and Michael and Jeremiah and I think, well, I've done my part to secure the future of the church.

Just a few corrections: +Fred didn't want to ordain me because I am a woman. As a devout Anglo-Catholic of the old school, he was initially deeply opposed to the ordination of women. Voted against it and spoke openly against it in the HOB. Even organized against it. Then, he got sober and came out and experienced a conversion. The last woman he ordained was his own daughter.

It was +Ed Chalfant, his successor, who was hesitant to approve my ordination because of my sexual orientation, fearing that I would become "an embarrassment to the church". He later left office after several women ( 3? 6?) came forward to say that they had had an affair with him.

Lesson: be very careful what you say as your words may come back to haunt you.

Finally: what I gave you was not his diocesan pectoral cross but "one" of his pectoral crosses. It's lovely, isn't it? But, he would have chewed ground glass from his grave at the very thought of a woman wearing it, pink stones not withstanding. I'm sure he is delighted with its new 'home'.

He was a handsome divil, eh?