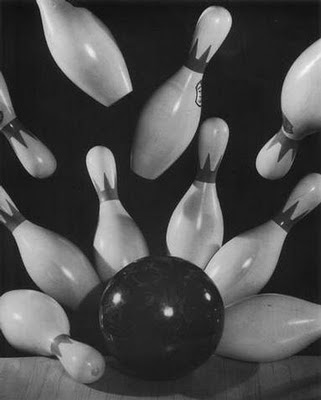 So I have a confession to make. I’m a member of a bowling league. In case you had any questions about just how big of a nerd your priest actually is, let this serve as confirmation. I’m such a nerd, that I’m on a bowling league. I bowl once a week. I’m not any good, but I have loads of fun. And I’ve made quite a few friends in the process.

One of the reasons I decided to join this bowling league is, living here next to the church - as much as I love it - I realized that I needed some outlet that had nothing to do with the church. I needed some way to interact with other people in a way that was different from “priest and parishioner”.

So each week, I carry off my bag - complete with my custom drilled bowling ball and hideous shoes - and I go bowling. And I hang out with people who don’t care (and mostly don’t know) that I’m a priest. It’s wonderful.

But even so, every now and then, as we’re sitting in the back of the lane waiting for our turns, the other bowlers and I get to talking. Sooner or later, the question comes: “So what do you do for a living?” I guess I could just dodge the question: “Oh, I run a small non-profit.” It would be true enough, I guess. But that’s not really my style, usually. So I just answer.

It’s at about that time that the other party’s eyes begin to bug out. They start thinking things like, “What did I shout after that last gutter ball?? Did he hear?”

But earlier this week I had one of those exchanges. The woman that I was bowling with asked the question, and had a pretty standard response once she heard my answer. But then she said something really funny. She said, “It’s been so long since I’ve been to church, the roof would probably fall in if I ever tried to go back.”

Of course she didn’t really think that the laws of physics that are hopefully at work holding up our roof would suddenly be suspended simply because of her presence. At least I hope not. But what was she trying to say?

I suspect it was something along the lines of, “I’m not good enough to go to church. That ship sailed a long time ago. Life has gotten in the way for too long now, and I don’t deserve to take a share of that anymore.”

The problem is, this is the kind of message that the church has been teaching for too long. We’ve built up barriers around ourselves and effectively communicated the lie that some people just aren’t worthy because of who or what they are, or how or why they do things.

The whole of the gospel message tells a different story, but perhaps nowhere more acutely than it does right now - in the Christmas story.

There’s a degree to which Christmas makes us all the same. Whether we are the wealthiest Wall Street banker or a humble, calloused laborer; whether we are the deeply pious, worshiping God with every breath, or someone who hasn’t given our faith (or maybe our absence of faith) a thought since this time last year. No matter who we are, Christmas brings us hope. Hope in spite of all of our deficiencies - those deficiencies that are always, no matter who we are, too many to number.

And that’s as it should be. We are all lacking. None of us deserve the radical outpouring of love that comes to us from God through Christ. None of us deserves a gift so great that the thrill of it makes the voices of angels explode in song.

But it is ours nonetheless.

The church didn’t fall down because we came to receive the gift of the love of God at Christmas. And it never will.

The somewhat frightening truth that lies behind the hope and expectation of Christmas is this: we don’t deserve it.

But we get it anyway. We get God’s love spread over us with a recklessness that only God could muster. A reckless slathering of love over the dregs of society that has always been the hallmark of the Most High God.

A love that makes the angels sing: “Glory to God in the highest heavens (and the lowest ditches), and on earth peace among those whom God favors” - even us. Amen.
St. Paul's; Jersey City