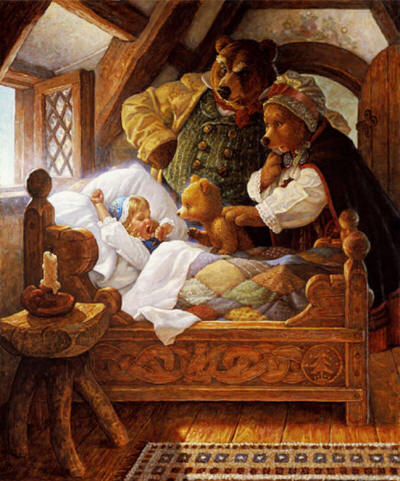 
Once upon a time, there was a little girl named Goldilocks. She went for a walk in the forest. Pretty soon, she came upon a house. She knocked and, when no one answered, she walked right in.

At the table in the kitchen, there were three bowls of porridge. Goldilocks was hungry. She tasted the porridge from the first bowl.

"This porridge is too hot!" she exclaimed.

So, she tasted the porridge from the second bowl.

"This porridge is too cold," she said

So, she tasted the last bowl of porridge.

"Ahhh, this porridge is just right," she said happily and she ate it all up.

After she'd eaten the three bears' breakfasts she decided she was feeling a little tired. So, she walked into the living room where she saw three chairs. Goldilocks sat in the first chair to rest her feet.

"This chair is too big!" she exclaimed.

So she sat in the second chair.

"This chair is too big, too!" she whined.

So she tried the last and smallest chair.

"Ahhh, this chair is just right," she sighed. But just as she settled down into the chair to rest, it broke into pieces!

As she was sleeping, the three bears came home.

"Someone's been eating my porridge," growled the Papa bear.

"Someone's been eating my porridge," said the Mama bear.

"Someone's been eating my porridge and they ate it all up!" cried the Baby bear.

"Someone's been sitting in my chair," growled the Papa bear.

"Someone's been sitting in my chair," said the Mama bear.

"Someone's been sitting in my chair and they've broken it all to pieces," cried the Baby bear.

They decided to look around some more and when they got upstairs to the bedroom, Papa bear growled, "Someone's been sleeping in my bed,"

"Someone's been sleeping in my bed, too" said the Mama bear

"Someone's been sleeping in my bed and she's still there!" exclaimed Baby bear.

Just then, Goldilocks woke up and saw the three bears. She screamed, "Help!" And she jumped up and ran out of the room. Goldilocks ran down the stairs, opened the door, and ran away into the forest. And she never returned to the home of the three bears. The End.

(The story of Goldilocks and the Three Bears from www.dltk-teach.com)


***
The story of Goldilocks and the Three Bears is rather unsatisfying, isn’t it? When this story popped into my head earlier this week, I couldn’t exactly recall how it ended. I remember Papa Bear and Mama Bear and Baby Bear. I remembered the sequence of things being wrong at the extremes before settling into something “just right”. I even remembered the family of bears discovering Goldilocks at the end of the story. But I couldn’t remember what happened after that.

When I read the story, it became clear why I couldn’t remember it. It’s unremarkable. It just ends. And Goldilocks was never heard from again.

It didn’t make sense to me, so I did a little research. Sometimes these old fairy tales are watered down and sanitized for us. Previous generations had a bit more of a tolerance for violence and happy endings that weren’t necessarily happy for everyone than we do today.

But no. This fairy tale was first recorded from the oral tradition fairly recently - just in the middle of the 19th century. And though some details of the characters have been shifted over the years, the plot is essentially unchanged. I expected to find that in the original, the little girl became supper for the bears, or at the very least was enslaved in their service. Something! Instead, she just ran away, never to return.

Putting aside how excited I am to hear this biblical account of our “Gentle Jesus, meek and mild” as a “glutton and a drunkard” - how I love the way that this flies in the face of so many popular assumptions of what it means to be “holy” - even that’s not really what today’s Gospel lesson is about.

Jesus is exasperated because the people seem never to be happy. They had the ascetic John, and his critics from within the religious elite could only complain. They had a near polar opposite in Jesus - a man, not roaming the countryside and crying out in the wilderness, but in the midst of the people, meeting them where they were, engaging in normal human hungers and desires. But even then they weren’t happy. It wasn’t “just right”.

The thing about “just right” - it’s a fairy tale. And it’s never as “just right” as it might have initially seemed. Just ask Goldilocks.

Even Jesus wasn’t “just right”. At least not the way most of the people expecting a Messiah might have imagined him to turn out. He wasn’t a king. He didn’t overturn the oppressive political rulers.

Instead he hobnobbed with tax collectors and sinners.

And he never promised to make things “just right”. Instead he said, “Come to me, all you that are weary and are carrying heavy burdens, and I will give you rest. Take MY yoke upon you and learn from me; for I am gentle and humble in heart, and you will find rest for your souls.”

If the world is pulling you down, if you’re feeling overburdened and oppressed, don’t just try to go it alone. Go with me, and you will find rest for your souls.

It’s a good word to hear on this holiday weekend. At a time when many of us have a chance to seek out the rest that our bodies need, we get to remember that we can also have rest for our souls.

It may not be “just right” - at least not as we might have imagined it. But it’s good. Amen.
St. Paul's; Jersey City