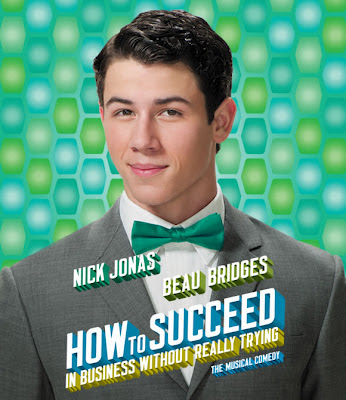 Synopsis: The latest Broadway revival of the oft-running favorite tale of J. Pierrepont Finch - an ambitious young aspiring business man, working his way up the corporate ladder in the world of wickets.

My thoughts: On the scale of "importance", How to Succeed... isn't likely to turn many heads, but even so, it's a delightful show, filled with hummable tunes and a fun and light story.

As I've mentioned before, I love to listen to the audience members around me at intermission and after the show, to see if our experiences are lining up.  The buzz around me today was uniformly positive - in exactly the ways that you would expect from a show like this.  A family behind me was out for a Mother's Day outing and the father asked his daughter, "What do you think?"  She responded with an enthusiastic, "I love it!"  I overheard someone else walking up the aisle say, "I don't want it to be over!" - a sentiment that was repeated by an unrelated someone else almost to the word a few minutes later.

There's no question - How to Succeed... is a crowd-pleaser!

In the fall, I was blown away by Daniel Radcliffe.  He wasn't particularly strong vocally, but his acting more than made up for it.  He was sharp and precise and could mug every audience member to their feet.  Though I'm not generally very "up" on my pop culture, I was looking forward to seeing if Nick Jonas provided some correction to the vocals - seeing as he is known for being a singer (granted, I'd never heard the Jonas Brothers before, but I hear they were quite popular for a while...), and has often had major Broadway roles.  Unfortunately, I have to admit that Jonas, while capable, to be sure, was weaker still than Radcliffe had been, and offered nowhere near the on-stage charisma of his predecessor.

Beau Bridges, on the other hand, was an improvement over John Larroquette.  He didn't raise the house with his voice, but he had a great deal more charisma than Larroquette, and seemed to have a more natural sense of comic delivery.  Perhaps Larroquette - while a very talented actor - was a bit too dry for the role.

The rest of the cast, however, was an assemblage of shining brilliance!

Tammy Blanchard, in the role of Hedy La Rue, was far and away the star of the production.  She carried the ditzy, wobbling mannerisms of her character all the way to comic genius.  In a role that could very easily become annoying, Blanchard turned La Rue into someone lovable - bordering on a heroine.

Rose Hemingway (in the role of Rosemary Pilkington) was another incredible delight.  She found that often-elusive balance of deep and personal interaction with the audience, all the way maintaining the integrity of her distance beyond the veil of the fantasy that was being portrayed before us.  Moreover, her singing is simply lovely, but also girded with power and grace.

Michael Urie, while at times a bit over-the-top playing Bud Frump, was a delightful addition as well.  Like his character, he tried very hard, but fortunately for us, Urie was more successful than the sniveling, useless man he played!

The entire ensemble worked very well, but one face that kept grabbing my attention was Robert Hager (in the role of Mr. Davis).  Though he was firmly planted in the ensemble, the precision of his approach to his role was striking and added to the delight of an already delightful experience.

The choreography by also-director Rob Ashford was perfect - so much so that I found myself wondering if I was in Christopher Gattelli land again!  It was physically intense, clever, and demonstrated brilliant movement.  It propelled the story in a subtle way (you know how I love subtlety!) with the workers of the company moving around and through each other like the cogs in a finely ordered machine.

The set, designed by Derek McLane, was deep and layered, changed gracefully from scene to scene, flexibly allowed for the wildly shifting pastels of the color palette, had huge levels to pull the eye around the stage, and provided a structure through which the entire aesthetic of the show could be conveyed.  It was quintessential 1960s - speaking to the popularity of the genre in the wider culture right now.  I kept remembering Mad Men and Pan Am.  It accomplished all that it needed to and more.

I wasn't planning to see this show again so soon, but after hearing that it would be closing next week, I decided to jump at the chance.  While I feel a tinge of sadness that this delightful production is closing, I recognize that it's after an admirable run of more than a year.  I'm also comforted to believe that it probably won't be long until someone mounts it again.  How to Succeed... will never be too far away!