**Note: I hope to get videos going again, but I haven't figured out the logistics of it yet in my new place.  But here's the text of the sermon. 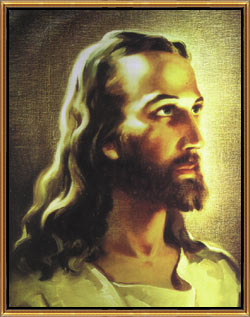 So I have a bit of confession to make.  I went pretty easy on you last week.

For those of you who were here in the morning, you know we had a simple service of Morning Prayer.  I offered a very short little homily, where I focused on the part of the Gospel that we read last week where Jesus said, “Who do people say that I am.”

Frankly, I skipped over all the challenging parts of that text, and used it as a simple way into introducing myself to the congregation.

I figured we all had a lot on our minds.  What with Celebrations of New Ministry, and meeting new people, and having a lot of guests and all that…

As I’ve reflected on our time together last week with a number of people, the thing I caught myself saying over and over again was: I’m ready to starting finding whatever normal will be here.  That first week was filled with so many unusual aspects, that it hardly felt like we’d really begun.  I found myself looking forward to this week more than the last - my first time to preside at this altar, our first time here together without the bishop and all of our guests.  I’ve been ready to get to work - without all of the other “special” stuff getting in the way.

Well, they say that one of the ways that God punishes us, is by answering our prayers, and this week my prayer was answered.

Our Gospel text this week leaves no room for an easy out - and in Jesus-terms, that’s about as normal as it gets.

There are hard truths this week - so hard that the disciples can hardly bear to hear them.

If you were paying close attention last week, you may have heard some of those ‘hard truths’ that Jesus repeats again in this week’s text: all of that stuff about being betrayed and suffering and dying and rising again.

In our popular culture, we have this image of “gentle Jesus, meek and mild” perpetually stuck in our heads.  We tend to imagine him through the lens of early 20th century American illustrators like Warner Sallman - who painted that now-iconic image, “Head of Christ”.  You know the one - the picture of Jesus looking pensively off into the distance.  One of my professors in seminary used to refer to it as Jesus’ high school yearbook portrait.

We imagine his flowing hair, and his knowing smile.  We see him gently stroking the heads of the children and hear him saying things like “blessed are the peacemakers”.

That’s the Christ that most of us feel most comfortable with, and call to mind most easily.

But it’s not the full picture of Christ.  Christ is in those images that make us comfortable, but Christ is also daring and scandalous.  Christ is challenging.

Earlier this week a Facebook meme was circulating that said, “Next time someone asks you, ‘What would Jesus do?’ remind them that freaking out and flipping tables is a viable option.”

Jesus doesn’t always give us the neat and tidy packages that we want or expect.

The disciples had a hard time hearing the hard truths from Jesus, and very often we do, too.

One of the reasons that the church has been struggling so much for most of the past generation or so is that the wider culture has come to realize that life isn’t always as neatly packaged as we, in the church, have too often tried to present it.  Sometimes life is messy.  Sometimes truth is hard.

For too long, the church has tried to sugar coat things, and to not challenge people.  We’ve aimed for the lowest common denominator.  There’s something dishonest about that, and the people we’ve been trying to reach are calling us out on it.

One of the reasons that I became an Episcopalian was because I was captivated by the ways that we, in the Anglican tradition, live in tension.  We aren’t easily lured into putting up veneers that hide the uncomfortable truths in life.  We’d rather face them head-on.

The Anglican idea isn’t that we share a certain set of beliefs or doctrines - it isn’t that we all fall in line under a specific leader or even a specific structure.  The overarching idea behind the Anglican way is that we are united in prayer.  In everything else, compromise is not only possible, but necessary.  But in prayer, we stick together.  Common prayer.

In recent years, this tradition has been challenged over issues like women’s rights and sexual morality, but the tradition that brought us this far remains unchanged.  Within the Episcopal Church and throughout the Anglican Communion our fortitude has been tested, but time and again it has proven true that where we remain united in prayer, our different ideas about how to exercise our Christian faith and life have survived in tension.

We don’t have to agree on every specific, we just have to remain committed to the relationship.  The relationship is always more important than any specific disagreement.

I think it’s a message that can resonate in our wider culture right now.  This idea of living in tension with uncomfortable truth is a gift that we can offer to the rest of the world - a world that largely believes that church and faith are no longer relevant in their daily lives.

As we move into the final weeks of this contentious election cycle, the culture of disagreement and disunity may seem all the more acute.  What would it mean for us to bear witness in the wider world to another way?  What would it mean if, in the face of disagreement and dissolving relationships, we proclaimed a message of remaining committed to one another despite our uncomfortable differences?

It would be countercultural.  It might even sometimes be hard.

But Christ’s call to us isn’t always easy.  Sometimes the message is uncomfortable and the truth is hard to hear.

It was certainly hard for those first disciples, and it remains so even now.  But the Christian vision isn’t served by dodging discomfort.  When we face those hard truths, we are our most authentic selves and we are most like Christ.