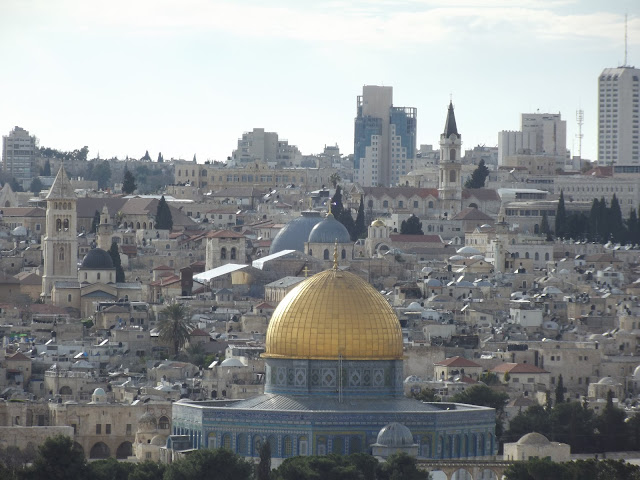 Last year, at the beginning of Lent, in the early Spring, I had the opportunity to visit Jerusalem for the second time.  My first time there had been in 2007, and since then, new archeological excavations had taken place around the Temple mount.  These newest excavations reveal the street level of the first century.  You can walk up to the gate to the Temple through which Jesus would have walked on that first Palm Sunday.  You can step on the same stones that the city’s first century inhabitants walked across.  You can place yourself in those places of awe that we heard about this morning.

The Temple, of course, is no longer there.  But its base remains, and even it towers above that old, long-since covered street.

The stones around the base are amazing.  Each one stands far higher than anyone’s head, and stretch out multiple reaches across.

Even as the ghost of a long-since razed building, the stones that remain reflect the majesty that once was.  It doesn’t take much in the way of imagination to recognize the imposing structure that this base once supported.  It’s easy to see how the disciples would have been impressed.  From their small towns and fishing villages in the northern reaches of the region around the Sea of Galilee, the Temple must have looked to them as permanent and as immovable as the God it was built to represent.

But nothing lasts forever.  Even those things that look most immovable never are.  That’s the danger that can come in choosing where to place your faith.  Even the earth itself can shake.  Even those things in our lives that seem most stable and sure are permeable and malleable.  Nothing is forever.

The challenge, instead, is to find faith amidst the shifting changes of this life - to look for God, not in the steady and the reliable and the expected, but in the moving, growing, and emerging.

Those times in our lives when things seem most moving, growing, and emerging, however, can be some of the most challenging times - times when we cling to objects and symbols of stability in the fervent hope that they will give us strength when it seems most lacking.

For most of this past week I was in St. Louis, doing work with the international Episcopal Church.  Every three years, the General Convention of the Episcopal Church meets to set policies and directions for our church all around the world.  But between these triennial meetings, the work of the general church happens through a series of committees, commissions, agencies, and boards.  After the General Convention in Indianapolis, more than 750 people applied to serve on these various “interim bodies” and about 130 were chosen by the President of the House of Deputies to serve.  The meeting this week was a gathering of all of the interim bodies at one time and in one place to try to facilitate collaboration where it’s necessary and appropriate.  I’m serving as the Personal Representative of the President of the House of Deputies to the Standing Commission on Anglican and International Peace with Justice Concerns.

As a body dedicated to international Peace with Justice concerns, clearly one of the major issues that we spent a lot of time thinking about and praying about and strategizing about is the ongoing unrest in Israel and Palestine.  Having visited the region, it’s one of the justice issues in the world that is closest to my heart.

When I first heard and processed the designation “Holy Land”, I foolishly judged it as overly sentimental, and guessed that it was representative of a particular theological slant that’s pretty far from my own.  But the thing is, on visiting for the first time, I came to realize that it really is a holy place - as Celtic faith traditions call places like that, one of the “thin places” - where the distance between the creator and the created seems a little less severe.  Everywhere you go, it feels… Holy.

Either way, it’s clear that those ancient streets and structures have been sanctified by centuries of prayer.

For several years now, the Episcopal Church has had a very clear policy stance with regard to the Israeli/Palestinian dispute - we support a peaceful, two-state solution.  Our church believes that Israel has every right to exist in that sacred space that has been regarded as the “Promised Land” to those often oppressed people for thousands of years.

But at the same time, our church equally supports the right of an independent, autonomous, and sovereign Palestinian state to exist.

On a good day, it’s a difficult line to walk.  On a good day, when everything is looking as peaceful and as stable as it ever does in that region, the peace can be too-easily shattered.

So this week, as the Episcopal Church’s Standing Commission on Anglican and International Peace with Justice Concerns was meeting, and setting our sights to focus, yet again, on striving for peace with justice in Israel and Palestine, even on that very same day, we heard reports of new war breaking out in that holy, and yet perennially unstable land.

It seems somehow exaggerated in Israel and Palestine, but one of the truths of this life is that the most stable thing we can find is varying degrees of instability.

Think about it in your own life.  We build illusions of stability for ourselves - tall buildings, and infrastructure, and family systems.  But it can all change in an instant.  Buildings can fall.  Systems can fail.  Relationships can change, and sometimes even die.

But what Jesus knew was that those human structures and institutions, while comfortable and even sometimes awe-inspiring, are not, in and of themselves, the basis of our faith.

This is a beautiful building, and our music is glorious, and our liturgy is strong and honest.  But are even these things enough foundation for a faith?

Jesus knew that our human structures, no matter how majestic or how glorious or even how efficacious, were not the end game.

All things would eventually come to an end.

But the “end” isn’t really the end.  Though creation’s fallibility and instability might be revealed, the constant nature of God as the eternal-creator is the heartbeat that undergirds all of the changes and chances of this life.  Even what looks like the end, isn’t really the end.  It’s the birthpangs of a new creation.

The question isn’t whether or not we’ll find stability.  We will for a time, sure, and it will go away some other time.  The question isn’t how we hold on to stability or cling to it.  It isn’t even how we might go about building it.

The question, instead, it what we’ll do with these birthpangs when we’re faced with them.  Will we confront our instability and use it to mold out a new, better creation as co-creators with God?  Will we endeavor to shape the impermanence we face into justice?

Or will we prop up what is falling down?  Will we cling to the past and ignore the needs of our now?

The Temple walls may be magnificent.  They may be awe-inspiring.  They may even help us turn our minds to God.  But they are not, themselves, gods.  God is much more.  God cannot be contained in these nor any walls or structures.  God is always on the move.  Always growing.  Always emerging.  When we try to tie God down into structures or systems or practices - that’s when we know we’ve lost the way.

In the days ahead, I ask your prayers for Israel and Palestine.  No one side is entirely innocent and no one side is entirely guilty.  No matter the politics of it, I believe that God hasn’t taken sides in this struggle and never will.  So let us pray - not for one or for the other - but that this instability and strife may be, like all others like it, the birthpangs of some new era of God’s will for us all.  Amen.
Good Shepherd; Philadelphia