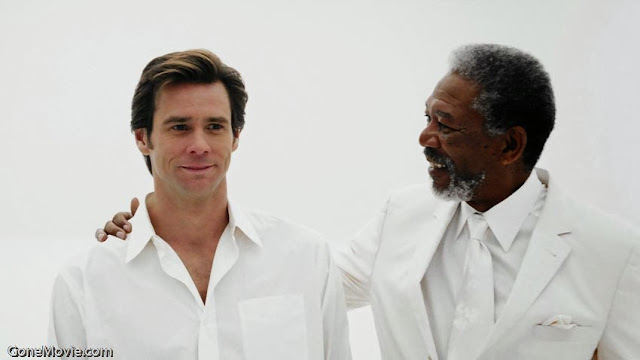 Prayer is a touchy subject.

It’s easy to treat it like a letter to Santa or a birthday wish list mailed to Grandma.  And if that’s your mindset, it’s even easier to be disappointed by it.

There’s a degree to which the gospel lesson we read today even helps to feed that kind of misunderstanding about prayer.  A quick read makes it sound as if we can just stamp our feet long enough and get all of our demands met.

The persistent widow cried out for justice so long and so annoyingly that the unjust judge finally gave in just to shut her up.  Surely God is better than an unjust judge!?

But it doesn’t take very long in a life of prayer to get the idea that it doesn’t always work that way.

Last weekend, as I was resting on Sunday afternoon, I was flipping through the television for something mindless to half-watch while I curled up with the dogs on the couch.  That movie “Bruce Almighty” was on TBS.  Have you seen it?

Bruce is a struggling television personality in Buffalo, New York, desperately hoping for the anchor job, but he keeps getting stuck with puff pieces and so no one takes him seriously.  In the last straw, as he thinks he’s finally starting to move up the ladder, he learns that his nemesis has been given the job.  He explodes.  Aside from embarrassing himself on the air and loosing the job he did have, he cries out to God, whom he thinks is pitting the world against him - declaring that he could do a better job than God, whom he thinks has clearly been ignoring all of his prayers.

The next day, God contacts him, and offers to let him take over.

Of course, lots of humor ensues as Bruce explores his new divinity and all of the powers that it holds.  He uses it in lots of little ways to win his job back, to get his girlfriend to forgive him for being rude to her, even to wreak a little “justice” on some people who had done him wrong the day before.

But before long, the responsibility of being God begins to take over.  Most notably, the prayers overwhelm him.  It seems the more he answers them, the faster they come in.  To try to deal with it once and for all, he just ignores the particular prayers and blankly answers them all, “Yes.”

The next day, everyone has won the lottery.  But since the winnings had to be divided evenly among the winners, everyone just got their dollar back.

It’s a funny movie, and a sweet little reminder that God and prayer don’t always work exactly the ways that we’d want them to: that prayers aren’t just magic ticks on a wish list - because that wouldn’t work out; but even that’s not really the point.  The fact that it just wouldn’t work out isn’t the whole story.

One of the things that makes me nervous about this increasingly “spiritual but not religious” culture that we live in, is that I wonder what will become of people when they have their times of greatest need.

My worry isn’t just about the survival of the church; the church will go on in one way or another.  My real worry is about all of these people that the church is failing to reach.

Every day, in churches across the country, priests are approached by non-members seeking the services of the church - baptisms, weddings, funerals - without any interest in becoming a part of the church.  People seem to remember that faith communities play a role at those pivotal moments in all of our lives, but they forget that that role is stronger and even more pivotal when it’s supported by all of the other connective tissue between those pivotal moments.

Faith is a practice of persistence.

It’s not just about showing up on Easter Day.  Easter Day doesn’t mean nearly as much if you haven’t journeyed through Lent.  It’s not just showing up on Christmas Eve.  The candles aren’t nearly as beautiful if you don’t watch them twinkle through the memory of hearing again the promise and expectation of hope that preceded it in Advent.  And none of it means much without the stories of Jesus and his followers that we hear all year long, week in and week out.

It’s not just about the big moments, or the products, or getting what we need when we need it.  It’s about that faithful persistence.

And it’s the same way with prayer.

You don’t have to sit at the bedside of many dying people before you realize that God isn’t just some genie in a bottle.

Many of our prayers are never answered in the ways that we want them to be.

I started realizing that I was getting good at prayer when I caught myself arguing with God - sometimes even getting angry.  That’s when the relationship started getting real for me.  I’d moved on from wish lists, or even little “thank you note” prayers, into something more honest.  It wasn’t long after that that I figured out how to say what needs to be said, and then to shut up and listen.