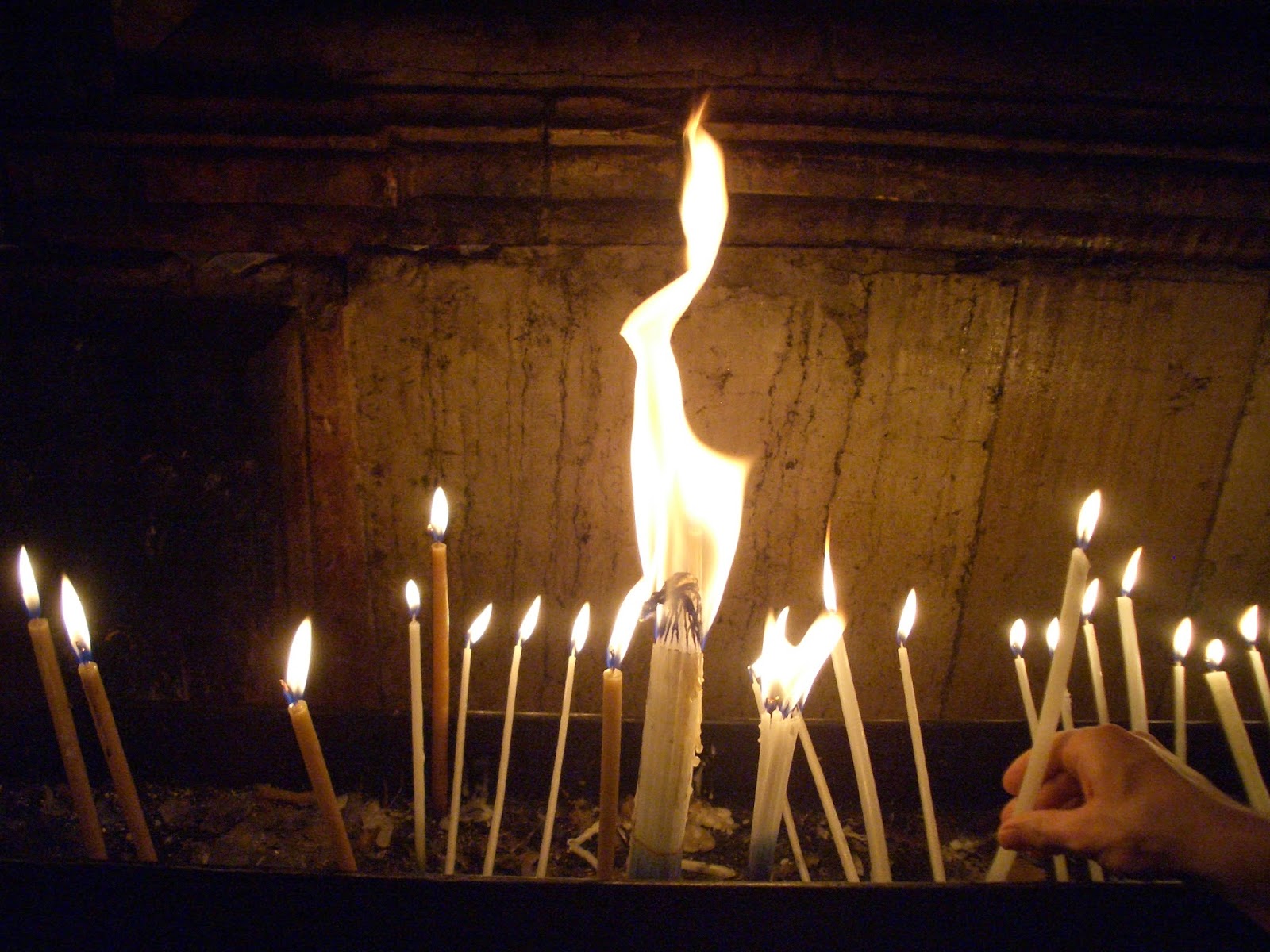 One of the traditions of Easter in Jerusalem is the celebration of the Holy Fire in the Church of the Holy Sepulcher.  If you ever have the opportunity to visit Jerusalem, one of the things you’ll find is that the Church of the Holy Sepulcher, while not particularly beautiful in the standards of beauty that we typically associate with churches in the West, has a kind of majesty and even mystery, unlike most any other church in the world.  It’s the church that is built on the site where tradition holds that Jesus was crucified and laid in the tomb. 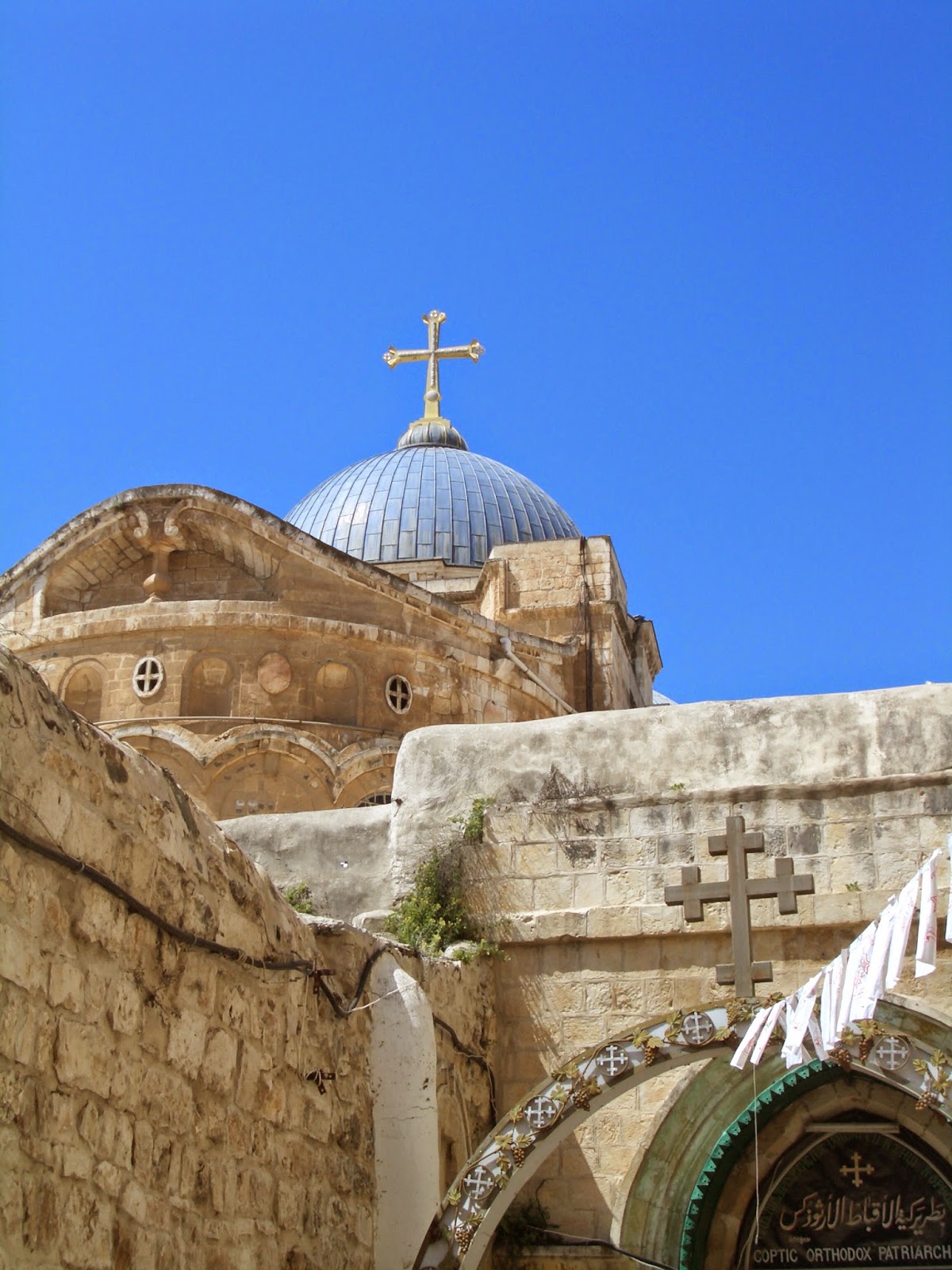 Each year, during Holy Week and Easter, the Orthodox churches in Jerusalem each revisit the events of Jesus’ last days on Earth and his resurrection through liturgies and rituals.  Throughout most of the week, the various traditions hold their various liturgies and commemorations each in their own way, according to the customs and traditions of their own culture, and in their own time and place.  For example, on Maundy Thursday in the year that I was there, my colleagues and I attended SEVEN foot washing liturgies, each one different from the others.

But all of the celebrations and commemorations come together - or perhaps more aptly, collide - on Holy Saturday.

On Good Friday, at the hour of Jesus’ death, all of the candles and lamps in the Church of the Holy Sepulcher are extinguished.  The church stands dark until the resurrection.

On Holy Saturday, the patriarchs of the various Orthodox traditions in Jerusalem gather in the church.  The Greek Patriarch of Jerusalem along with one other patriarch from another tradition enters the aedicule - a smaller structure within one of the rotundas of the church which houses Jesus’ tomb.  Tradition holds that every year, on that day, the Holy Spirit descends on the tomb and miraculously kindles a new fire.  The Greek Patriarch lights a candle from this fire, then passes it on to the other patriarch, who then passes it through a small hole in the aedicule.  From there it spreads to the thousands of people crammed into the church and the tens of thousands of others packed into the streets of the Old City of Jerusalem for untold blocks around the church.

The year that I was there, we were unable to get into the church itself.  In fact, the closest that we could get was about a half-mile away.  Even so, the moment that the fire was passed through the aedicule to the waiting crowds, we could hear the bells of the church pealing and the crowds erupt with cheers.  The energy of that moment spread through the streets of Jerusalem like an electric shock, and the fire spread almost as quickly.  Even as far away from the church as we were, it was still only a matter of a few minutes before the fire had been passed, candle to candle, to us.

But Easter didn’t come so quickly to everyone.

While, to me, and to my modern, Western sensibilities, this tradition seems sort of delightfully quaint, there is, within it, a measure of truth and wisdom.  I said this to you all on Easter Day, but it bears repeating here, three weeks into our celebration of the resurrection: sometimes Easter comes more slowly than we might like.  For some of us Easter seems downright elusive sometimes.

It can be hard to have joy on-demand.  It can be frustrating to have “relief” thrust upon us simply at the insistence of others.  The emotions we actually feel are much more likely to match our own experiences than they are to match someone else’s schedule.

That’s the story we hear in the Gospel lesson for today.  The two followers on the road to Emmaus had left their community.  They had left the company of the other followers just as the Easter moment was beginning to spread like fire through the community.  They had heard of it from the women who had first discovered the empty tomb, but they had not yet seen it.  Easter was not yet real to them.

Perhaps that’s why they had to leave.  Perhaps it was just too much for them to be surrounded by the joy of the others when they didn’t yet know it themselves.

We’ve all been there.  Someone else’s birthday celebration when we were having a bad day.  A wedding when our own relationships are struggling or elusive.  Christmases or Easters or any other holidays when our hearts just aren’t in it.  It’s not that we don’t want to celebrate - we want to share in the joy.  But sometimes the joy hasn’t yet spread to us.

And one of the realities we face as Christians in the world today is that the Easter message still hasn’t reached everyone.  The Easter message is that Christ is alive, and not everyone knows it.  Even if - in this culture that is so permeated by Christian messages, practices, and culture - even if everyone has heard it, there are still so many who don’t know it.

There are those who have walked away from the community because the message didn’t seem real to them.  There are those who have left the community because the church didn’t make sense or seem relevant to their daily lives.  Some have left because even though the church speaks peace and love and joy into the world, some people’s actual experience of the church has been more defined by things like exclusion and pain and guilt.

Not everyone who has heard the message knows it, and it’s our job to spread it around like that electric fire that sweeps through Jerusalem every year.

There’s a side-story in the television show The Sopranos where Janice, Tony’s sister, is dating an Evangelical Christian for a while.  Whenever he greets anyone - whether he’s met them before or not - the first words he says to them are, “Have you heard the Good News?”

I’m not saying that’s who we need to be.  In fact, I’d rather that NOT be who we are.  That’s certainly not how I want to live out my Christian faith.  But we do need that same level of persistence (just not that same level of annoyance!).

We never know when our lives may lead to an “Emmaus Road experience” for someone who needs it.  And there are so many people in our lives who do need it.

We can be agents of Easter.  We can spread the fire.