Our authority is in our faith 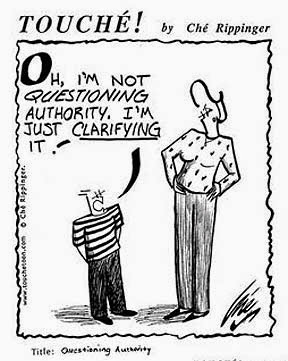 The topic of authority is interesting - particularly for us in communities of faith.  It’s played out in all of our relationships - no matter how major or minor - every day.  A driver takes up two parking spaces in a crowded lot and we quietly say to ourselves, “He must think he owns the place.”  A child is eating a piece of candy when his mother says, “Who said you could have that?”  A coworker suggests a course of action only to have her colleague bitterly growl back, “Who asked you?”

Even in our own relationships here in this church, questions of authority come up all the time.  Since we’re fairly new in our priest and parish relationship, they come up probably more than they would at other times.  Last week I met with the altar guild because they wanted to honor my authority as your priest to make sure all the things for worship were being set up as I’d expect.  Each day as I’m sorting the mail at the church I have to ask myself, “Under whose authority does this fall?”  As we plan programs and services and events for the coming year, we sometimes defer to the authority of the wardens, and sometimes to the authority of the outreach committee, and sometimes to the members of the vestry, or whomever else.  And since we’re all still getting to know one another, sometimes it’s hard to decide who holds the authority for what.

So it’s easy to see why the chief priests and the elders of the community were concerned with authority.  They were troubled by Jesus, not so much because of what he was doing, necessarily, but because of who he was to be doing it.  He wasn’t within the established systems of authority.

We’re joining this story in mid-thought, so bare with me for a moment while I give you some context, and bring you up to speed.

This first thing we really have to know about this story is that even though we’re reading it now, it’s actually a Holy Week story.  In the chronology of Jesus’ life as it’s depicted in Matthew’s gospel, this is taking place just after Palm Sunday.  The crowds had joyfully welcomed him into the city, and they had waved palms and shouted Hosanna.  There had been a lot of good feelings around.

But we all know the story of Holy Week, and we know that the joy and the excitement and the anticipation of Palm Sunday isn’t the end of the story.  There is no tidy “happily ever after” in the cards.

Tension was starting to build around Jesus, almost as soon as he arrived in Jerusalem.  And Jesus really didn’t do anything to try to ease it.  In fact, he sort of made it worse.

Just the day before - in this account, just a few verses before what we read this morning - Jesus had grown angry in the Temple and had overturned the tables of the moneychangers for turning the sacred rituals of the faith into a profit-making business and defiling the house of God with their greed.  And he had angered the leaders of the temple by doing acts of healing there in spite of the authority of the rituals of the faith.

The next morning, he looked for figs in a tree that was bare, and when he found none he cursed the tree and it died at once.  When the disciples saw what he had done, they were amazed and asked him how it had happened.  He explained to them that even their own proclamations made in earnest faith would have enough authority to do anything - even more than what they had just seen.

Finally, when he was teaching in the temple, the priests and the elders had seen enough.  After all the times that his actions had called the authorities into question, it was time for someone to question his authority.  But the teaching that we heard about today was just the tip of the iceberg.  The catalog of Jesus’ infractions against the status quo had been building up for quite a while.

So authority can also have another side.  When it’s unchecked, as it was in the case of the chief priests and scribes and elders of the temple, authority can become tyrannical.  When an established authority is worshiped as if it were a god - where all things are in deference to it, and it alone - the authority can be stifling.  It can keep us from experiencing and embracing the movement of the Holy Spirit.  That’s what happened later that week with Jesus.  The authorities felt so threatened by him that they killed him.  But, of course, the power of God can wither trees and move mountains, so through Christ, even the authority of death was called into question - and it was found to be lacking.

So much of our lives are eaten up in questions of authority.  Who has it?  How can we get it? Who’s using it wrong?  Who do we want to give it to?  How can we wash our hands of it?

The message of Christ is that our authority is borne out of faith.  Jesus said, “If you have faith and don’t doubt, not only will you be able to do like I have done with this fig tree, but even if you say to this mountain, ‘Be lifted up and thrown into the sea,’ it will be done.  Whatever you ask for in prayer with faith, you will receive.”

And God - the one who created the heavens and the earth; the one who raised the mountains, and who can just as easily throw them into the sea, that same God of great power and might who can even raise the dead - that same God is shown to be of great power and might not chiefly because of any display of strength or control, but chiefly in showing mercy.  That’s where God’s authority lies.

The lesson we hear in the stories of the leaders of the temple is that they looked for authority in all the wrong places - even when it was right under their noses.  They respected their own authority too exclusively, when a greater authority was right there for them.  Too often, we do the same thing.

In the church, authority doesn’t always look like we’d expect it to.  Authorities in the spiritual realm can be surprising.  As we explore and negotiate questions of authority as a community, here, we’d be wise to remember that.  Christian authority can be subtle.  It can be surprising.  And if we can remain open to the creative power of God, and to the inspiration of Christ, and to the wisdom of the Holy Spirit, it can move whatever mountains might be in our way.

God is at work within us.  Have faith.  That’s the real authority we hold.  That, and God’s mercy.  Nothing can stand in our way.  Amen.
Holy Trinity; Valley Stream