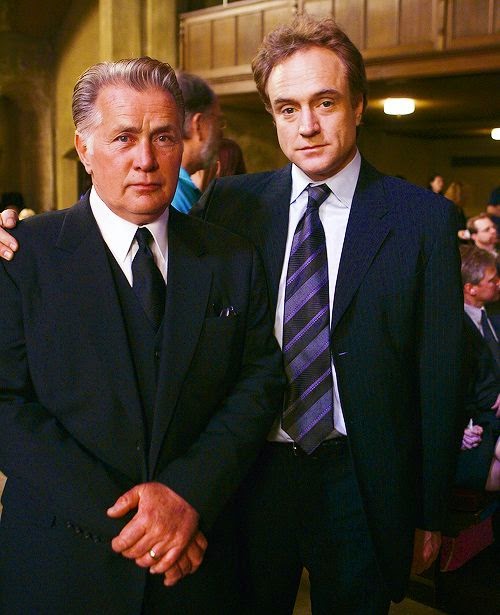 I forget if I’ve brought y’all a West Wing story in my preaching yet.  If I haven’t, it’s definitely time.  If I have…  Well…  Here’s another.

One of my favorite television shows of all time is The West Wing.  It’s smart, and fast paced, and it addresses serious social issues, and it’s all centered around one of my favorite spectator sports - politics.  So I watch the show over and over again.  Most situations in life tend to have a relevant West Wing reference…  At least most things in my life.

So, as I was reading again this year about John the Baptist, and his relationship with Jesus, this scene from The West Wing kept playing again in my mind: the President is in the Oval Office talking with his Deputy Chief of Staff, Josh Lyman.  Josh runs the White House Legislative Affairs operation, and has just suffered an embarrassing defeat.  He’s apologizing to the President, and feeling forlorn about it all, when the tension is interrupted by the President’s half-humorous observation.  The President says to him, “You know what the difference is between you and me, Josh?  I want to be the man.  You want to be the guy that the man depends on.”

That’s a really rare thing to find in politics - someone whose highest aspiration is to help someone else be great.  And, in truth, it’s a rare thing to find anywhere in our culture.  We live in a culture that idealizes individualism, and expects each person to pull themselves up by their bootstraps, and to strive for greatness - for their own greatness - often to the peril of anyone else’s interests.

But in the figure of John the Baptist, we have a model of service.

In his time wandering the Judean wilderness, John the Baptist had made something of a name for himself.  I’m sure it was true that a number of folks thought he was just plain crazy, but he had established himself as a noteworthy prophet.  He had followers, and he had a message.

The truth is, John could have gone on quite well, just like that.  He could have embraced his moderate fame - he might have even grown it a bit as the word continued to spread.  He could have focused on himself, and his own needs, and his own advancement.  If humanity then was anything like what it usually seems to be now, he may have even felt some pressure to do just that.

But the central lure of Christ is to be in relationship - to care about others - to build up community.

Christianity is not about erasing anyone’s individuality - just ask John the Baptist.  He was thoroughly individual.  He wore rough-hewn rags of coarse skin as his clothes.  He ate of the meager fare of his wilderness foraging.  He screamed the hard truths to the curious crowds that no one else was willing to say.  And his role as one of the first to be called by Christ was simply to be himself.  Not to fall in line and act like all the others.  Not to tend and nurture his political power until he could become influential and respected.  No, he was called as who he was, to minister in the way that he was ministering.  And, as is always true of the most important ministry, his ministry pointed not to himself, or to his own achievements, or even to the centrality of his own message.  Instead, his ministry pointed to something bigger than himself.  His ministry pointed to what was to come.

On Thanksgiving Day, as I was setting the table and getting some of the last details ready for the feast that was about to begin, a friend of mine who was there with me noticed across the room a collection of religious icons from around the world that I have hanging together and she asked me: “What do you think of the second coming?”

Believe it or not, this is one of those questions that priests get asked a lot.  So, I didn’t have to struggle or search for an answer.  I had it ready.  I said, “It happens every day.”

In short: Christ comes in community.

When most people talk about “the second coming of Christ” they’re talking about the end of the world.  But if experience is any indicator, when Christ comes, it’s less about the “end” than it is about the beginning of something great.

A few years ago I saw a bumper sticker that said, “Jesus is coming - look busy!”

That’s how we prepare the way of the Lord - how we live into our Advent calling to be John-the-Baptists for our own world.  Looking for Christ might seem strange to the rest of the world.  That’s okay.  John the Baptist was certainly strange.  But when you find Christ, it will be the beginning of something great - and that’s the miracle that we’re working toward for Christmas.  It’s not about a single day or a single season.  It’s not about a birth.  It’s not about a baby.  It’s not even about a man who would someday save the world.  It’s about a shift in perspective that keeps saving the world over and over again.  A shift in perspective that transforms both individuals and whole communities.

That’s what we’re getting ready for: not Christmas, but Christ.  You are called to prepare the way.  Amen.
Holy Trinity; Valley Stream