A couple of weeks ago, before the responsibilities of the school year came into full swing, and when I had a bit more time than I currently do, I got to spend a little time watching some movies.  It’s a real luxury to be able to sit and to watch a movie, but it’s one of those luxuries that can also feed your spirit if you do it right.  There are stories out there from which we are made better for having heard, and one of the movies that I re-watched in that downtime was one of those stories: Pay It Forward.  Maybe you’ve seen it.

Pay It Forward is the story of Trevor, a 7th grader.  When his Social Studies teacher assigns his class to find a way to make the world a better place, Trevor has the idea to do three “really big things” to help other people.  In return, he only asks that they each do three more “really big things” to help other people, as well, and that they keep the chain of helping others going.  The movie follows the story of how the chain of events spreads - people sacrificing in big ways for others who really need it.  The chain spreads more than Trevor, or his mother, or his teacher ever might have imagined, and the world really is changed.  But even beyond the concrete examples of kindness that are spread, the real change is the attitude of altruism and service that are inspired by the people who participate in the exercise.  People receive real kindness, and in turn, they’re inspired to be kind to others in ways that they’d never imagined possible.

It’s a story about the power of sacrifice.

Sacrifice is one of those concepts that doesn’t tend to get a lot of “press” in the church these days.  To the degree that we talk about sacrifice at all, it’s usually in the context of recognizing with gratitude the sacrifice that Jesus once made for us.  But, what we more often fail to remember when we’re thinking about sacrifice like that, is that as Christians, we are committed to modeling our lives after Christ.  We usually think about that in terms of teaching each other about God, and trying to live prayerful lives, and trying to be kind to others.  But we rarely think about that in terms of real sacrifice.

While it’s certainly true that kindness, and prayerfulness, and teaching can all be kinds of sacrifice, they’re very small in comparison to sacrifice as it was embodied in the life and death of Jesus.  When we model our lives after Christ, we’re called to do more than simply give a nod in that general direction.  We’re called to live Christ-like lives, and a Christ-like life is one that is largely - if not entirely - a life of sacrifice.

Each year in the fall, just as there is a subtle shift in the winds denoting the first whiff of a chill in the air reminding us of the winter that is to come, there is also a subtle shift in the tone of Jesus as he speaks with his disciples.  Have you noticed it?  The lighter teachings and miracles that we’ve heard about through the summer change focus slightly.  There’s a sharper edge.  There’s a chill in his words, reminding us of the sacrifice that is to come.

“The Son of Man must undergo great suffering, and be rejected by the elders, the chief priests, and the scribes, and be killed…”  There is a great sacrifice to come.  And if you want to follow me - if you want to truly follow me - you’ll have to sacrifice, too.  “For those who want to save their life will lose it, and those who lose their life for my sake, and for the sake of the gospel, will save it.  For what will it profit them to gain the whole world and forfeit their life?  Indeed, what can they give in return for their life.”

Today, as a parish, we are celebrating Grandparents Day.  While that’s not really a religious observance, it does sort of make sense for us to note the day as a Christian community.  For many of us, if we are fortunate enough to have known them, our grandparents are among the first examples of sacrificial living that we encounter.  Perhaps obliviously, we hardly notice the sacrifices that our parents made on our behalf.  But our grandparents’ sacrifices stand out a little more clearly.  They are these people who come into our lives seemingly out of nowhere.  Yet they care for us and love us about as generously as we can imagine.  But even for those of us who didn’t know, or have close relationships with grandparents, we can still remember with gratitude that they went before us.  We can still imagine the ways that their lives influenced our own - even in those ways that are beyond our ability to perceive.  Through the decisions they made, and the children they bore, our grandparents paid it forward.  They made sacrifices for the generations that would follow, even our own.

It’s out of that sense of honor and gratitude for those who have gone before that our parish has found its emerging mission focus: providing pastoral care and services to the elders in our community.  The generations before us have brought us to where we are now, and for that we are grateful.  With gratitude, we long to give something back: we long to sacrifice.

In our common life as a parish, it is important in the same way to look around at the inheritance that we enjoy.  That inheritance is rich - both in the resources that we continue to use, but also in the established community itself.  But in recognizing that inheritance, it’s important to remember that it exists because of sacrifice.  The generations that precede us have paid it forward.  Now, as the inheritors, we are called to keep paying it forward to the generations who are to come after us.  How will we sacrifice for the sake of the gospel?  What would we be willing to sacrifice to leave behind an inheritance just as significant as the one that was left for us? 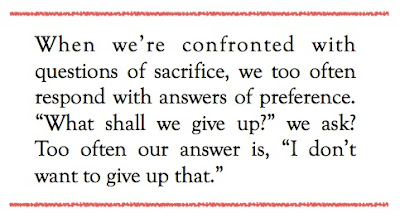 Unfortunately, when we’re confronted with questions of sacrifice, we too often respond with answers of preference.  “What shall we give up?” we ask?  Too often our answer is, “I don’t want to give up that.”  Sacrifice is not about having our preferences met, but about risking something big for something good.

Jesus would have preferred not to sacrifice quite so much.  We hear it in his prayer in the Garden of Gethsemane: “If it’s possible,” he prays, “let this cup pass from me.”  In the end, however, he isn’t driven by his own sense of preference, but instead by his own heart for sacrifice.

For this parish, as we continue to engage in a season of transition and discernment, part of how our bishop has asked us to think about this transition is through the lens of sacrifice.  One of the ideas he’s mentioned that we’ve talked about, at least abstractly, is the idea of selling all of our buildings and using these resources we’ve inherited to engage more closely with the community we are here to serve.  If we were to do something like that, it would certainly be a major sacrifice.  It would probably be something that many, if not most of us, would prefer not to do.  But Christian discernment is not about coming to a clearer understanding of what we want.  We can usually identify our preferences pretty easily and pretty clearly.  Instead, discernment is about coming to a clearer understanding of how we can better embody our Christian faith.  Most of the time, that involves sacrifice.

While sacrifice can be a pretty scary concept, we don’t have to look very far to see that it’s a good thing.  Remember the boy in Pay It Forward.  Remember our grandparents.  Look toward Christ.  It’s easy to admire the sacrifice that others make, but it takes a bit more work to recognize that we should be following in their example.  In the season ahead, I pray that we find the sacrifices that we’re able to make so that we can live as better examples of faith in action.  Amen.