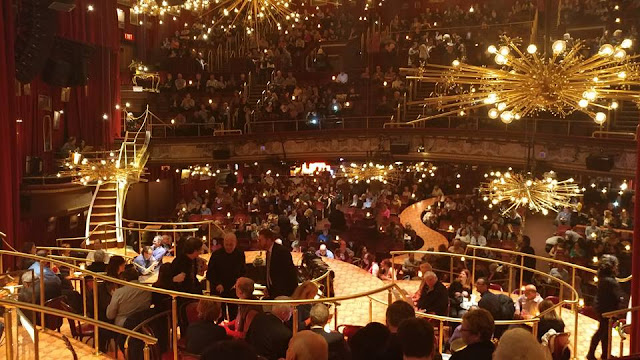 Most of you probably know about my love of theatre.  Though I have performed some (many years ago) my real love is more about experiencing theatre than it ever was about performing in it.

One of the roles that theatre can play in people’s lives is providing an outlet for escape.  When life is stressful – when the world seems more filled with uncertainty than security – when we’re mourning or angry – it can feel good to slip away for a while into happy, brassy music punctuated by rhythmically tapping feet holding up beautiful, smiling faces.  Or maybe some farcical comedy – laughing at the antics and missteps of some aggrandized version of humanity can pull us out of doldrums, at least for a while.  It’s a world where everything works out in the end.

There’s a place for that in our lives.  It can be therapeutic, and maybe sometimes even necessary to be forced into a smile when a smile seems most foreign.  As it’s said in Steel Magnolias – one of my favorite plays turned into a film – “laughter through tears is my favorite emotion.”

But where theatre really moves me – where it will get into my bones and stir me – is when it doesn’t provide escape, but deeper and more profound insight into my life; when it helps me to confront reality in a new way; when I’m not so much transported, as I am imported.  For me, deeper satisfaction comes not from being disconnected from my reality, but from being reconnected with my humanity.

That’s what we’re about during Lent – reconnecting.  We so often think of it as a time of denial, or of disconnecting from the world, but I’ve come to think of Lent as being like the very best kind of theatre.  It’s about reconnecting with humanity and with God in the deepest, most visceral ways that we can.

It’s summed up best in the words of Paul in today’s Epistle: “We entreat you, on behalf of Christ, be reconciled to God.”

In recent years, my very favorite kind of theatre has been what we call “immersive theatre”.  As the name implies – it’s about immersing the audience into the world of the story.  We’re not passive observers beyond that invisible fourth wall, but we become a part of the story.

Last week, Michael and I had an experience in just this kind of theatre.  We saw Natasha, Pierre, and the Great Comet of 1812.  The classic old Broadway theatre that houses the production had been transformed.  We were seated with hundreds of others on the stage, with the orchestra and actors all around us, and the play-space had been extended throughout the house.  The production happened all around everyone.  The actors stared us in the face, pulling us in and making us a part of 19th century Russian aristocracy.  It made the story as much about now as then.

That’s just what we’re trying to do in these next few weeks.  We want to pull ourselves into the story.  We want to remember that the story of the life, death, and resurrection of Jesus is as much about now as then.  This isn’t just a history lesson, or even a self-help seminar.  It’s both of those things, and more.  It’s about the joining together of what was, what is, and what will be.  It’s about finding that common thread that connects these great lives of ancient days to our own great lives now, and to the great lives that are still emerging.  We look to the person of Jesus as our guide, but it’s not just about him, long ago.  It’s also about us, right now.

Peter Gomes, the Baptist theologian and preacher, and long-time chaplain to Harvard University once said, “The question should not be ‘What would Jesus do?’ but rather, more dangerously, ‘What would Jesus have me do?’ The onus is not on Jesus but on us, for Jesus did not come to ask semi-divine human beings to do impossible things. He came to ask human beings to live up to their full humanity; he wants us to live in the full implication of our human gifts, and that is far more demanding.”
I entreat you, on behalf of Christ, be reconciled to God.  Don’t disconnect, but come together.  Don’t deny yourself, embrace yourself.  Don’t berate yourself for the many ways you are separated from God, but highlight and focus on the grace that makes you God’s own gift to our current time and place.

The whole of the Christian message is about finding that reconciliation that Paul told us about.  Lent is the same.  It’s about coming together, and knowing God more intimately.  It’s about recognizing that we are staring in the faces of the actors and being pulled into the story.  It is our story.  It’s not about escaping, but embracing.

You are dust, and to dust you shall return.  We were a part of this story before we were ever imagined on this earth, and we will continue in it through the ages that await.  Come inside.  Be reconciled to God.  It’s our story.  Amen.
Holy Trinity; Valley Stream