A biblical guide to winning the lottery 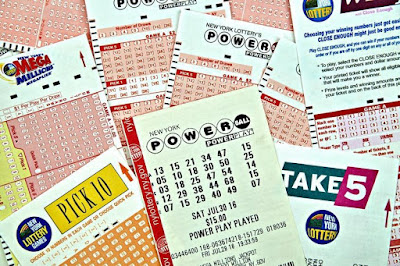 I don’t know if you’ve ever heard of these, but there are churches you could attend, where they give away door prizes – a way of trying to reinforce the belief that God showers physical blessings on those who truly believe.  This line of thinking is a part of a school of thought called “the prosperity gospel”.  And one of the common criticisms of that line of thinking is that the “gospel” – the “good news” – for those believers, is the expectation of material prosperity itself, and not actually the faith of Jesus Christ.

I’ve usually worked pretty hard at counteracting that belief system with one that’s more complex, and multi-layered…  One that comes through studying and delving into the scriptures and the faith.  But this morning, I hope you’ll forgive me if, for a moment at least, I start to sound like a prosperity gospel preacher.

Because the thing is, there’s a lesson right here in the Bible – in the very texts we read today – that can move us all closer to actually winning the lottery.  It’s there in the Epistle – in the letter of James.

Now, I’m not really much of a gambler – but I have been known to buy a lottery ticket now and then.  I generally figure that it’s worth the dollar or two it costs to have the fleeting fantasy of what I’d do if I won.  And while I’ve never won more than the odd dollar or two back, my general principle has always been pretty simple: the surest way to increase your odds of winning the lottery, is to buy a ticket.  I’ve never won the jackpot after buying a ticket, but I’ve come a lot closer than those other times when I didn’t buy a ticket at all.  As James says, “be doers… not hearers only…”

The same is true of our faith.  James says, “Be doers of the word, and not hearers only.”  We can’t just hear about the faith, we must exercise it.  Do it.  Become practitioners of it.

It’s not enough to read the Bible, or to hear the stories.  It’s not enough to sing the songs of the church, or even to reflect on, and pray through their meanings.  It’s not even enough for us to pray the offices each day, or to attend worship each week.  To really become citizens of Christ, we must live Christ-like lives.  We have to live like we belong.  We have to DO the work.  Or as James said, “be doers of the word”.

In the conflict we read about this morning between Jesus and the Pharisees, the heart of it all comes down to who did what.  Jesus’ followers and the Pharisees were all “doers”, but they were doing different things.  The Pharisees complained that the followers of Jesus weren’t following the laws.  They were living unclean lives by engaging in unclean behaviors.

To really hear this, though, we have to translate the words from our current understandings to try to grasp what they actually would have meant back then.  Mark’s Gospel says, “When the Pharisees and some of the scribes who had come from Jerusalem gathered around him, they noticed that some of his disciples were eating with defiled hands, that is, without washing them.”

Of course, we were all taught, as children, to wash our hands before dinner.  And we’ve probably all passed that teaching on to other children since then.  But the idea of washing up for dinner was different for the Jewish people of the ancient world.

For us, we teach our children about hand washing because we understand that eating with dirty hands can make us sick.  It’s unsanitary.  Before we put our hands near our mouths or near our food, we want to make sure they’re clean.  But for ancient people, who had no concept of bacteria or germs, the rules of washing were more about adhering to the laws of the faith.  Sure, they had probably come to recognize that people became sick after eating with dirty hands, but their understanding of it was that the dirtiness didn’t cause illnesses, God did.  So they concluded that God didn’t like dirty hands before dinner.  They didn’t engage in traditions of washing to keep from getting sick, they engaged in traditions of washing to keep from upsetting God.

But Jesus tried to change that whole mindset.  It’s not that Jesus thought we shouldn’t wash our hands before dinner.  I’m sure that if he thought about the world through a 21st century understanding, he’d probably be in favor of it.  But he did want people to have a deeper understanding of God.  And the way God is known through Christ is less about the rituals we perform, and more about how we really live our lives every day.

In other words, take responsibility for your actions.  In other words, don’t just count on knowledge of God to be your salvation.  Take a hand in the work of God.  Be doers of the word, and not hearers only.

While it wasn’t what Jesus said, I think the other side of what he said is also true.  Nothing that goes into our bodies can make us righteous, in and of itself.  It’s only what comes out of us that really demonstrates how close we are to God’s ideal for us.  Eating the bread and drinking the wine of Holy Communion is important.  It’s a part of how we honor God and express our faith in our bodies.  But the bread and the wine – the body and the blood – taking those in isn’t enough.  They nourish us and sustain us, spiritually and physically.  But the real measure of faith isn’t how often they go in, but how genuinely they come out in our lives.

We are DOERS of the word.  Not hearers only.  Thanks be to God.  Amen.