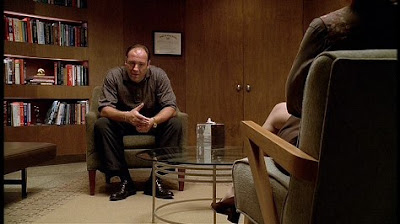 In the name of God our Creator, the source of every good gift.  Amen.

For the past couple of weeks, Michael and I have been watching the HBO series, The Sopranos – the story of a northern New Jersey mob boss, and his struggles with depression and anxiety.  I’ve seen it before – a couple of times – but this is Michael’s first time through the series, so don’t give anything away!

And don’t worry – I’ve been duly schooled by some of our own northern New Jersey Italians in this congregation that it’s not a representative expression of the typical experience around here.  Even so, I keep coming back to the series again and again, because of how smart it is, and how beautifully it expresses certain aspects of the human condition and abnormal psychology, all through the lens of a sociopath, who somehow becomes something of a hero, when we see the world through his perspective.

There are so many subtle moments of brilliance that come across in the show.  Like when Meadow, the mob boss’ daughter, gets punished for trashing her grandmother’s house in a party – but she successfully manipulates her parents into punishing her with something incredibly light, that will have virtually no impact on her life, while still making her parents feel guilty for punishing her at all.  It’s masterful.

But some of my favorite subtle moments are those when the Soprano family’s self-centeredness and greed are shown.  Most often, they’re so matter-of-fact that they could go unnoticed, which is part of the brilliance.  Tony races his yacht past a row boat, paying no attention at all to the small paddle boat that will be overturned by the wake...  Meadow will have a meltdown because she feels she’s being denied some luxury that most of us might only dream of experiencing…  Tony will spend what would be an annual salary for most people on some impulse buy…  Some extravagant gift is given to the family, and it’s just tossed aside as unimportant…  It happens so often it just becomes a part of the soup of their psychology and experience.  Real sacrifice and real gratitude are essentially beyond their comprehension.

The story in the Gospel today, however, shows how that same kind of limited scope can be true for all of us, even if not on the scale of the Soprano family.  We hear of the rich man who comes to Jesus, asking what he should do to “inherit eternal life”.  How can he earn his place in heaven?

Jesus starts relatively small.  Tradition has taught you about the laws, he says.  The commandments were passed down from Moses.  Done, the man says.  So Jesus replies, okay, then there’s only one thing left: give away all your possessions to people who need it more than you.  Let everything go.

His reaction was probably like it would be for most of us: it was just a little too much to ask.  He leaves, feeling dejected.  How could he be asked to do that?  It’s more than he can do.  It’s just too much.

Then, Jesus lets the secret slip to the ones who were following him: if you’re trying to make your own path to righteousness and salvation, you’ll fall short.  No matter what you do, it won’t be enough.  There’s nothing that we can do to earn God’s favor.  It just comes as a gift.  And gifts aren’t purchased – they’re just received.

No, there’s nothing we can do to inherit the gifts of life that come from God.  It’s not about our doing, but God’s doing.  But that doesn’t mean we’re not called to live generously and sacrificially.  We are generous and sacrificial, not because we think it will buy our ticket to heaven, but because we are filled with joy and gratitude to God for giving us that gift, despite our inability to earn it.

Later today, you’ll be asked to bring forward your Financial Commitments to support God’s work here at St. David’s for 2019.  We will pray over these commitments together, and ask that God give us the will and the commitment to fulfill them.

But we’re not asking you to buy your ticket into God’s favor.  God already loves you and supports you.  God already wants you around.  If you want to follow Jesus’ advice and give everything you’ve got, we’ll certainly let you, but that’s not the point.  The point is, we’ve been called to spread the good news of God’s love in our own little corner of creation.  You are already the beneficiary of that good news and that love.  We give, not so that we earn God’s love, but so that we can celebrate and spread the good news of God’s love.

There’s nothing we can do to earn God’s love.  And that’s the good news.  Because the love is already here.  Because God has already done it.  All that’s left is for us to revel in that love, and to share the joy that comes from it with everyone around us.

Bless them and the commitments they represent that they may they be the first fruits of all we have and not what we have left over, so that we may live out as closely as possible how you give to us. May we see them as our offering to you, sacred & holy, yet of this world and filled with possibilities. May we hold this image in our hearts and minds so that as we watch our offerings each week come to your table, we can see our very selves as a part of this offering. It is us on the table, living sacrifices to you. Amen.
St. David's; Kinnelon