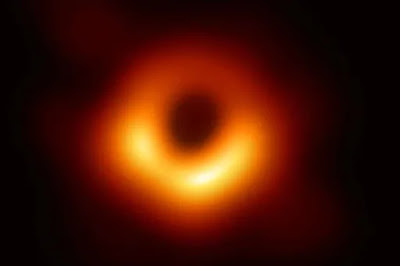 A couple of weeks ago, you may have seen in the news, for the first time in human history, people have seen a black hole – not an artist’s rendering based on hypotheses, but an image, formed from light.  Of course, by definition a black hole is unseeable.  It’s an object that is so small and so dense, and contains so much matter that its gravity is so incredible that nothing can escape – not even light.  And all that we can see is light, so there’s no way we can see something with a force of gravity so strong that even light can’t break free.

But we can see its effect.  Based on the predictions of great scientists of the past – including the likes of Albert Einstein – we’ve had expectations about what a black hole might look like.  And while we can’t see it’s light, they predicted that we might see the light being pulled into it.

The problem, up until now, had been the distance.  The black hole that was captured in the image is some 54 million light years away – at the center of a neighboring galaxy.  At such a distance, there is no telescope on Earth that is big enough to be strong enough to capture such a distant, faint sight.

This problem was tackled by a team of scientists, and among them was a young woman named Katie Bouman – not yet 30 years old.  She is a computer scientist specializing in imaging, and she helped to develop a protocol for manufacturing an image based on the observations and recordings of telescopes around the world.

No one telescope was strong enough.  No one perspective was sufficient.  But together, they could assemble enough information to get a piece of the picture.  Enough to help the computers to be able to reasonably fill in the gaps.  Enough to at least point us in the right direction, and to give us a glimpse of this driving force in the cosmos that we’d all been missing.

Throughout human history, God has been calling us into relationship.  God created us, and set us free, but even then, God longed to be with us.  And for just about as long, we have been striving to see God.  We have been straining to capture what we, ourselves, and we, alone were insufficient to capture.

When the time was right, a bit of God’s own self came into the world in the person of Jesus – the one who would be the Christ.  He was the great unifying force – helping us to fill in the blanks that we’d been missing, pointing us toward a clearer perspective of what God had in mind for us.

It’s hard to imagine how he could have been killed.  Even understanding the politics of revolution, even understanding the psychology of the powers that be feeling threatened by him…  Even with all of the resources we have at our hands, it’s hard to imagine how such a person of peace and unity could become so reviled.  How this person could travel so quickly from the “Hosannas” of Sunday to the cries of “Crucify him” today.

As I was driving earlier this week, though, I had a thought.  There were some tulips down in Morristown that had already passed their peak.  They’re such a beautiful flower, that it’s hard to accept that they’re gone so fast.  But tulips first open as little buds – filled with brilliant color.  They seem so perfect that’s it’s hard to imagine that they’ll soon be gone.  But with each passing day of their brilliant but brief lives, they open a little wider.  Before long their straining to open wider and wider until there’s nowhere else to go.  Their little petal arms open so wide that they die.

We know the rest of the story.  Just like the tulip, when the petals fall off, and it seems dead to the world – we know it’s only for a season.  We know the tulip will rise again.  On Good Friday, we know that Easter is just around the corner.

But that’s not the point of today.  Today, the point is to live in the pain.  To mourn the loss.  To feel the death, and to know that it’s real.  The rising will come in time, but we can’t rush it.  We have to live here for a while.
St. David's; Kinnelon