Don't be a jerk 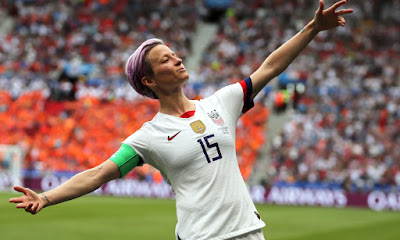 God of Grace, Compassion, and Unity: help us to love more and to hate less, to listen more and to talk less.  Help us to make the world a better place.  Amen.

I’ve never been much of one for following soccer – in the South, where I grew up, it was, at best, seen as some sort of yuppy pass-time for the children of people who thought too highly of themselves, or – perhaps even more commonly – as a sort of treasonous and weaker form of “real football”.  Alas, those earliest lessons ingrained in childhood are hard to overcome, and now I rarely even acknowledge that soccer exists.  I don’t even really know if it has a particular “season” when it’s usually played.

But even the staunchest Southerner would be hard-pressed to have avoided soccer this week.  With the US Women’s Team winning the whole shebang at the World Cup, the sport has gotten more attention this week than it typically does among Americans in a whole year.  On Wednesday, there was even a ticker tape parade through the “Canyon of Heroes” in New York City.

At the end of all of those festivities, Megan Rapinoe – who has become the breakout star of the winning team – spoke back to all the criticisms she’s received as attention on her has grown over the last several weeks.  In her speech after the parade, she positioned herself, not just as the leader, or spokesperson of a soccer team, but as a moral leader in a national system where there is a noticeable vacuum of moral leadership.

She couldn’t have honestly walked down that Canyon of Heroes if she felt any other way.  True heroism isn’t just about accomplishment, but about the moral fortitude undergirding that accomplishment.

I don’t typically talk about my sermons, or the process that brings them about with Michael, but every now and then, when I feel sort of stuck, I’ll mention to him what I have stewing.  When I was talking about it with him earlier this week, he rolled his eyes at me when I told him that the basic point of the gospel lesson for today is Jesus saying, “Don’t be a jerk.”  But I really do think that’s the long and short of it.

This man – whom the English text describes as a “lawyer”, but who would probably more accurately be described as a “scholar of the scriptures” – comes up to Jesus and asks, “What must I do to inherit eternal life?”  Jesus first meets him where he is – he asks him to recount what the law – the scripture – says.  The man says, “You shall love the Lord your God with all your heart, and with all your soul, and with all your strength, and with all your mind; and your neighbor as yourself.”  Jesus affirms him.  But then the man – this scholar – takes it a step further.  “Who is my neighbor?”  And Jesus gives us the story of the Good Samaritan.

It’s a story you probably know.  It’s so ubiquitous, that even people who aren’t regulars at church have heard about the “Good Samaritan” and have some idea about what it means.  We’re told that a man is traveling, having been to Jerusalem, and en route to Jericho – a distance of about fifteen miles, so it was no small journey to make on foot.  Alas, on his way, he’s attacked by bandits, robbed of all he had that was of any value, and left for dead.  First a priest walks by – clearly a leader of the faith.  Not wanting to be bothered, he crosses the road to avoid the man.  Then a Levite walks by – Levites were basically acolytes to the priests – the ones who assisted them in the duties of the temple.  Like the priest, he does everything he can to avoid the situation.  But then this foreigner walks by – one who is looked down upon as being less than “chosen” – one who could never compete with Jesus, or the scholar, or the priest or Levite.  But he was the one who showed mercy.  Not the ones who defined their lives by their service to God – but the one thought to be unreachable by God.

So Jesus asks the scholar – who was the neighbor?  And, though he might have more readily identified with the priest or the acolyte, this scholar of the scriptures recognized that the Samaritan was the neighbor.  “The one who wasn’t a jerk,” he says.

It all seems really simplistic.  At least until we realize that we are the priests and the Levites.  We are the religious leaders and acolytes of our culture.  We are the scholars, who need that extra little nudge to finally “get it”.

Before the sermon today we sang that hymn “Marching to Zion”.  It’s hard not to love that one.  It just has joy built into it.  In black churches I’ve known, it’s more common than not for people to break out into hand-claps and gentle dancing when this song comes around.

Thank God for prophets who come to us in the form of soccer players – even if it is just a treasonous mutation of real football.  I guess that’s what a Samaritan in our context ends up meaning – someone who shares the right Gospel out of the wrong mouth.  Thanks be to God.  Amen.
St. David's; Kinnelon