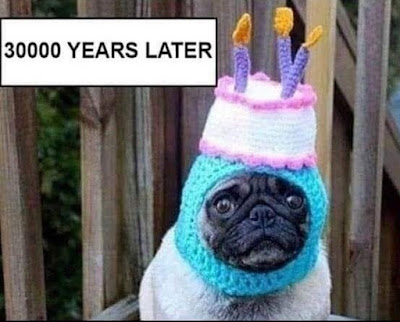 In the name of God: from whom all blessings flow.  Amen.

A saw graphic on Facebook earlier this week that told a story in two frames.  In the first frame, it showed a wolf skulking about.  Above him, there was a thought bubble, which read, “I am hungry and food is scarce.  But the humans have food.  Perhaps I could ask them to share.  What could possibly go wrong?”  The next frame was labeled “30,000 years later” and it showed a pug with a confused and somewhat annoyed expression on his face, wearing a knitted cap, in the shape of a three dimensional birthday cake.  What could go wrong, indeed…

The funny thing is, that’s basically what evolutionary biologists say happened.  It all started when humans began settling in villages.  A side effect of our gathering and staying still, as opposed to wandering in smaller, nomadic tribes, was that our trash stayed with us.  Before we’d simply left it behind.  So piles outside the villages would form, and the piles of trash, undoubtedly including food waste, would attract animals looking for food – wolves among them.  Eventually, a sort of symbiotic relationship formed.  The wolves learned to tolerate the humans as their food source, so we weren’t looked upon as prey.  And the humans learned to tolerate the wolves because they provided both “cleaning services” for the waste, and protection from other predators.  Each species served the other.  And each species made allowances for the initially unnatural relationship with the other, because something good came from it.

Citing evolutionary stories like this, it has been suggested that gratitude is one of the most basic and automatic human experiences.  In the face of good results, we feel grateful.  And we amend our behavior to elicit those same results again.

But expressing that gratitude isn’t always quite as natural for us.

In the story of Jesus and the ten lepers, we see that in action.  While traveling in the region between Samaria and Galilee, Jesus encounters ten lepers.  Right from the setup, we see that it’s another story of Jesus ministering with the outcasts.  Not only were the lepers completely ostracized from everyone in “polite company”, the setting punctuates it further – it happens in the region between Samaria and Galilee.  Jesus was outside the realm of “polite company”, at least from the Jewish perspective, from the very beginning of the encounter.  He was in foreign territory.  And not just foreign territory, but skirting the edges of that Samaritan territory that the good, chosen people of Israel just knew that they were superior to.

When the lepers came near to Jesus they called out, “Jesus, Master, have mercy on us!”  And as is his way, he does.  He has mercy on them.  And he tells them to show themselves to the priests – that was so that their having been made “clean” could be certified, so that then, they could reintegrate with their community.  But as the ten left, one came back, and fell at Jesus’ feet and thanked him.

“Were not ten made clean?”, he asked.  Because the other nine just disappeared.  Feeling gratitude is common.  But expressing it seems incredibly rare.

Part of what it means to worship and to be a part of a church is to practice gratitude – through our giving, through our words, and through our support of one another.  Those are all expressions of gratitude.

But, of course, our experience isn’t that far from Jesus’ experience.  When we’re out in the world, expressions of gratitude seem rare.  We may meet ten grateful people a day, but we’re lucky if we hear about it from even one.

If we’re not careful, it can turn our hearts.  It can make us jaded.  It can make it harder for us to find and express gratitude, because it’s so rarely been shown to us.

But turn to the words of the prophet Jeremiah: he’s speaking to the people of Israel – the chosen people of God – in the midst of their exile.  He tells them, even in the midst of your suffering, build your houses and make your homes, plant your gardens and eat, let your families prosper and increase.  In short, don’t let your suffering keep you from being you.  Don’t forget who you are and what you stand for and all that you’ve been called to be.  Even when the world and your experiences in it fall short, don’t stray.  Don’t fall away.

Gratitude turns wolves into puppies.  It turns outcast lepers into followers of Christ.  And it turns normal, everyday giving, into stewardship.  Imagine what gratitude could do for you.  Amen.
St. David's; Kinnelon