What are the rules of the game? 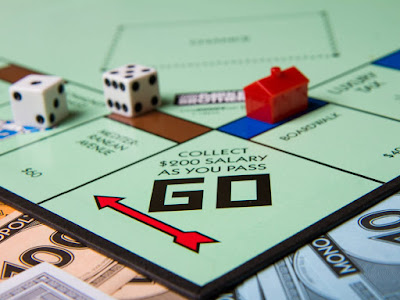 American ingenuity has brought a great deal of progress and innovation into the world in the past couple of centuries.  But, of course, not all innovation is progress.  And not all developments move us in the right direction.

There’s one innovation from 20th century American history that has the power to tear people apart.  It has the power to destroy families and even dissolve friendships.  It wields a power that is, perhaps, too great to rest in the hands of average people without protective provisions in place, and yet, it is readily available – even to children – in many homes across this country.  Even in my own.

I am, of course, speaking of the Parker Brothers board game, Monopoly.  Of course the game seems innocent enough.  Gather with people close to you, and take turns each making your way around the board, buying properties, paying rents, and, of course, occasionally running into “Chance”.  But in the process, disagreements emerge.  Arguments break out.  And all too often friendships and familial relationships suffer.

In that way, the game of Monopoly is a lot like the way a lot of people practice religion.  We all come at it with our own rules.  We tend to group ourselves with others who play by the same sorts of rules that we play with – either the ones we first learned with, or the ones that have evolved through our own education and discernment along the way.  And just about everyone thinks their way is THE right way.  Even in our little groups of like-minded folks we often find differences in our understandings, and those differences can come between us.

And while it is true that we’re living in an age of increased polarization and tribalism, we can’t blame this predicament entirely on current events.  It’s an old, old story that keeps playing on repeat through the ages.  It’s a story so old, in fact, that even Jesus Christ faced it more than 2,000 years ago.

The story we heard today was about the Sadducees confronting Jesus about his understanding of the rules of religion.  Around the time of Jesus there were three main groups of Jewish people: the Essenes, the Pharisees (we hear a lot about them), and the Sadducees.  The Sadducees had a very particular outlook on what it meant to be people of faith.  They believed that the Jewish way of living and worshiping God had strayed too far from the intentions of the earliest believers, so their focus was only on abiding by the Law of Moses.  Anything else was considered extraneous and unrelated to any true understanding of God.

So they came to Jesus with a question.  Now, typically, when religious leaders of any sort come to Jesus with a question, the issue at hand isn’t their desire to seek greater understanding, but to catch Jesus in a trap.  The Sadducees knew the laws they professed and believed everyone should be following.  They didn’t remotely believe that they could benefit from hearing Jesus’ perspective.  They asked so they could catch him believing what they thought was wrong.

So they asked Jesus, “Moses wrote for us that if a man’s brother dies, leaving a wife but no children, the man shall marry the widow and raise up children for his brother.  Now there were seven brothers; the first married, and died childless; then the second and the third married her, and so in the same way all seven died childless.  Finally the woman also died.  In the resurrection, therefore, whose wife will the woman be?”

For Jesus, however, the answer wasn’t merely a fact to be recited.  It wasn’t a matter of law to be interpreted.  For Jesus, this represented a moment to share a deeper understanding of what it means to follow God.  Following God isn’t about following rules.  It isn’t about adherence to a literal interpretation of scripture.  For Jesus, connecting with God is about asking different questions.

The Sadducees wanted Jesus to tell them what would happen when the people in the story died, but Jesus basically said, that’s not the point.  Resurrection is the point.  Life is the point.  God isn’t a god of dead things, but God is one who celebrates and sustains life.  God is the God of the living!  That’s what resurrection means.  It means that even when the world can only see death, God can see life.  It means that even in the face of persecution on the cross, or whatever else we can throw at life to try to destroy it, God can still only see and make and celebrate life.

It’s a radical way of seeing the world.  It’s not about overturning the old rules.  It’s not even about making new rules.  It’s about looking at the rules and the situations in which they exist in a new way.

The Sadducees weren’t wrong, per se.  They were working with the best wisdom they had available to them, and they were earnestly trying to be the best followers of God that they could be.  But it’s like if we suddenly learned that the point of Monopoly was not to be the last one with money, but to make sure no one in the game ever ran out.  All the pieces would be the same, but the point as we understood it would be radically different.

I doubt Jesus convinced any of the Sadducees that day.  It was too much to take in.  But he planted the seed, and look how far those seeds have spread today.

We’re still trying our best to see this new way of seeing the world.  It’s still sometimes hard to wrap our minds around it.  Death just seems so very real.  But our faith in Christ teaches us that there’s more.  God is God, not of the dead, but of the living.  For to God, all of them are alive.

May it be so for us – that we may live just that fully and see life in each other just that freely.  Amen.
St. David's; Kinnelon