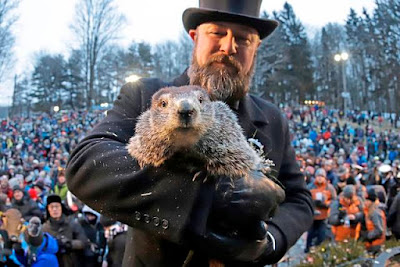 Our service for today is a bit of a liturgical anomaly.  The Feast of the Presentation of our Lord in the Temple is one of those days in the church calendar that happens every year on February 2nd, but among many faithful Christians it typically goes mostly (or entirely) unnoticed, because it most often happens on a weekday.  It’s rare that it happens on a Sunday, like today – so it’s rare that it gets the sort of “top billing” that it’s getting this year.

It’s unusual for a popular, secular observance to be so clearly and obviously rooted in biblical tradition, but believe it or not – Groundhog Day is.  It has its roots in ancient Jewish observances that came to be celebrated in Christian communities on the basis of the Gospel reading today.  Now, try as you might, you are unlikely to discover any mention of groundhogs anywhere in the Bible, and certainly not in anything we’ve read today, so you’ve got to stick with me for a few minutes while I take you on this little journey through history.

Everyone knows the tradition of Groundhog Day.  It suggests that if a groundhog leaves its den on this particular day – February 2nd – and sees its shadow, it will retreat back inside, signaling that winter will continue for another six weeks.  If it does not see its shadow, however, it signals that winter is almost over.  Groundhog Day is mostly celebrated in the US and Canada, but it came to us from Germany, where the meteorological critter was not a groundhog, but a badger.  That’s why the capital of Groundhog Day is in Pennsylvania – because it was so heavily settled by Germans.

And how did those Germans of days gone by come to use badgers to predict the weather?  Well, it’s Martin Luther’s fault.  Granted, Martin Luther didn’t overtly advocate for the wisdom of badgers, but he did start the Reformation – and thus, started the process of moving the dominant culture in some parts of Europe away from Roman Catholic religious practice.

This day was significant in European culture because it was the day that the Roman Catholic church observed the Feast of the Presentation, or the Feast of the Purification of Mary, sometimes called “Candlemas”.  The day commemorates the first time that Jesus was presented in the Temple in Jerusalem by his parents.  It was said to have happened on this day, because the Jewish custom was that women would need to be ritually purified after childbirth on the 33rd day after her son’s circumcision.  In Christian observance, it is the conclusion of the 40-day combined Christmas-Epiphany season.  She would be purified by offering a lamb as a burnt offering and a dove as a sin offering.

In ancient Jewish culture, fire was not just a symbol of purity, but it was revered as a method of purifying that which was impure.  As it says in the reading from Malachi that we read this morning, silver would be refined – or purified – in fire.  So, too, they believed that our own impurities could be remedied through the purifying forces of fire.  That’s why burnt offerings were offered to God.

That’s where Candlemas comes in.  The same way that Christmas is a shortened version of Christ Mass – the mass of the nativity of Christ, Candlemas refers to the Candle Mass.  While Christians put aside the tradition of burnt offerings to purify us for our sins, we still held on to the ritual significance of fire.  But rather than burning flesh, we turned to burning candles.  The tradition that was common was that households and churches would gather the candles they needed for the coming year and have them blessed in church on Candlemas – the Feast of the Presentation and the Feast of the Purification of Mary.

For me, though, the real spiritual significance of this day isn’t about predicting the weather – it’s about seeing signs that aren’t, on their own, readily visible.  These signs take a measure of faith.  The signs about the weather are immaterial, really, other than that they, too, are unseen before they occur.  But the gospel points us to the stories of Simeon and Anna – two strangers to Mary, Joseph, and Jesus, but who saw in that baby being presented in the temple something that no one else could see.

Simeon was a man of great faith who was supported by a greater presence of the Holy Spirit.  The Spirit had told him that before his death he would see the Messiah.  On beholding Jesus for the first time, he knew that the Spirit’s will had been fulfilled.  “Now you are dismissing your servant in peace,” he said, “for my eyes have seen your salvation.”  He could go on to die, because seeing Christ, his purpose had been fulfilled.

Anna was also a prophet and a person of great faith.  On Jesus’ entry into the temple, she, too, knew that God’s will had been fulfilled and she praised God in his presence.

These two people saw pure and essential truth in him, even before it was readily visible to most others.  Like a refiner’s fire, we can’t really see the purity at first.  It does its work in the fire in ways that we can only come to know after the fact.  But there is unseen benefit at work even when we can’t recognize it yet.

So, today isn’t really about predicting the weather – it’s about recognizing and embracing the grace of God, and celebrating those among us who have vision for it before the rest of us can.

Think of that as you see the candles burning in church each week.  And remember it when you hear the faith of another that you can’t quite embrace yet.  Remember that there are always those faithful people among us whose faith leads the way.  People like Simeon and Anna.  People like John the Baptist.  People like all those who led us to faith and who taught us to live in faith, even before we had faith of our own.

That’s the message of Candlemas – that sometimes the object of our faith is still unseen.  It represents the hope that in time we may grow into faith as well.  Amen.
St. David's; Kinnelon