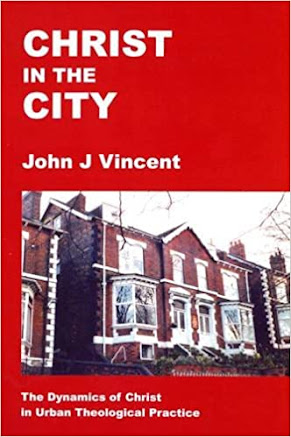 Several years ago I had the opportunity to study with John Vincent – a scholar in the UK who had developed a particular specialty for ministry in urban settings.  He is mostly retired now, though still teaching some at the Urban Theology Unit that he founded at the University of Sheffield many years ago.  The institute does grant degrees through the university, but they also offer a number of certification programs, and also short-term courses like the ones I took the summer that I spent time there.

But one of the things that’s so interesting about John’s scholarly work is that he is very intentional about taking his work outside the classroom.  For him, ministry is a not just an academic exercise, but also an inherently practical one.  So, beyond his teaching, he also regularly checks in on various ministries he’s founded around Sheffield.  Not churches, but ministries.

One such ministry is a sandwich shop that provides a ministry of hospitality for its neighborhood.  People eat lunch, of course, but they also are free and welcome to just spend time there.  As patrons become more involved and interested in the ministry of the place, it becomes more than just a place to have lunch, but a place to study and to reflect – and yes, to worship.  But the “church” as we’ve traditionally understood it is not the primary point of entry for the people of this ministry.  It’s not even the goal – it’s just one of a number of possible outcomes that can result from the ministry.  But the ministry is the point, more than any institutional desire.

Part of how John’s ministries get established is through a pattern he’s embraced for recognizing and responding to the needs of the community.  The shorthand of the pattern is simple: see, judge, act.  These three functions exist in a cycle.  First we observe.  What do we see in the world?  Who do we see?  Where are they?  What realities exist?  Once we’ve seen, we start to make judgements.  What’s working?  What’s not working?  What is standing in the way of the people’s or the community’s best interest?  What’s not standing in the way and is actually helping them to achieve their goals and to live into their values?  Finally, act.  But only ever act after you’ve seen and judged.  And it’s a part of a cycle.  Once you’ve enacted some change, you need to see again, then judge again, and maybe act again.  It can go round and round.

I thought of John and his process as I read through the gospel this week.  In many ways, this gospel is just a continuation of the story we read last week about Jesus casting out the demon in the synagogue.  Our reading today began, “After Jesus and the disciples left the synagogue…” but some other versions of this text give it an even tighter tie-in – a more urgent tie-in.  Some say, “As soon as they left…” or “Immediately after leaving…”  But the point that’s driven home in that is to say that the story is continuing.  Last week’s tale wasn’t just a one-off, and this week’s won’t be either.  We’re moving into a pattern.

And like John Vincent’s “see, judge, act” cycle, the pattern I begin to see emerging in Jesus’ ministry is, “proclaim, act, reflect”.  He always seems to begin by proclaiming the good news of God – like his teaching in the synagogue.  But the proclaiming then leads to action.  Last week it was the banishment of the demon who had possessed a man.  This week it’s healing Simon’s mother-in-law, and then following that, the healing of the entire city.  The gospel writer tells us that people came and crowded around him to get their piece of the miracle.  It says the “whole city” crowded around the door.

After all the proclamation and action, it was time to reflect.  We’re told that Jesus slipped away under the cover of darkness.  He found a place where he could be all alone, and he prayed.  It’s a cycle we see again and again in Jesus’ life.  Jesus proclaims the good news of God to people who hunger for it, and that proclamation always leads to some action.  But after the action, Jesus needs to steal away in prayer.  He needs time to reflect on his ministry and direction.  And that time away steels him to start again.

There is wisdom for this in the church.  The Vincent model and the Jesus model aren’t really all that different – the main difference is that the cycles have different entrance points.  But the wisdom isn’t so much in choosing the right path, or the right cycle, or model, or teacher, so much as it is finding a pattern that keeps us engaged with the world and engaged with our own ongoing discernment.  All that we see and do in the world should propel us to reflection, prayer, and discernment.  And all that inner work should also propel us back into the world to see and do more, on behalf of Christ.

Most of us aren’t experts at everything.  One side of the coin comes a little easier than the other.  And that’s okay.  Just so long as we don’t just rest on what’s easy to the neglect of what’s needed.  The patterns will bless us, and they’ll help us bless the world.  Thanks be to God.  Amen.