The perils of bypassing the cross 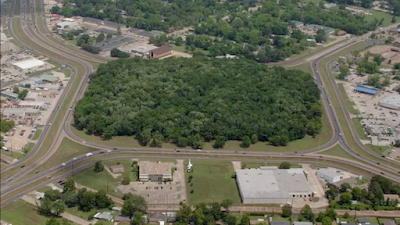 When I was growing up, in the city near the towns where my grandparents lived, there was this huge traffic circle.  It was at the intersection of two of the biggest highways in the city.  Somewhere along the way, some civil engineer had decided that a traffic circle was more practical there than an intersection.  And, to be fair, studies have been done that prove that that is often true.  Replacing full stops with intermittent yields keeps the cars flowing.

But this wasn’t like any traffic circle I’ve ever seen anywhere else.  This one was massive, with many lanes, and it essentially formed the heart of the city – pulsing cars through the city’s two main arteries.  And it was complicated.  Every time I entered it I felt like I was taking my life into my hands.  Indeed, there were a lot of accidents there.

As we make this stop on the journey through Holy Week, it’s important to remember what an important stop along the road this is.  A lot of people – people of faith – will try to go around this stop.  They’ll try to jump from Palm Sunday to Easter.  Some may even be trying to jump from Christmas to Easter.  But, while bypassing the cross might seem more efficient, it is a lot more complicated.

It’s hard to recognize the brilliance of the gold if you’ve skipped the somber beauty and solemnity of the mournful black.  It’s hard to value the light if you haven’t fumbled through the shadows.  It’s hard to appreciate life conquering death if you’ve passed over and ignored death.

That doesn’t mean those Christians who are trying to build traffic circles to the holidays are lost.  It doesn’t mean that they can’t experience the joy of resurrection, and find meaning in worship and commemoration.  The Holy Spirit does this work for us.  And she can work with whatever we have available – building a path to Christ.

My mind turns to those giant triple-cross displays that you’ll find throughout the South on the grounds of evangelical churches – especially the ones that abut major highways.  Churches spend hundreds of thousands of dollars on these displays to testify to the sacrifice of Christ.  I don’t judge them for their piety even though it is foreign to me.  And I don’t think it’s necessarily a bad thing for them to do.  You can discuss the wisdom of using funds in that way, but we have churches that use funds in ways that they probably wouldn’t approve of, too.  My bigger point is, I just don’t think it’s necessary.

The giant crosses – even the ones that we use and appreciate – they are symbols that remind us of Christ and the sacrifice, and even the Resurrection.  But they aren’t necessary because the cross is everywhere.

We can build all the circles and detours we want to try to avoid it, but it’s right here.  It’s around us wherever we go, whenever we can open ourselves to seeing it.