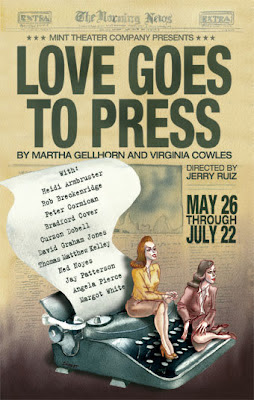 Synopsis: Women working as war correspondents in that male-dominated world of the 1940s.

My thoughts:  I had said in my last FCS post that that one would probably be my shortest post ever, but this one may just have it beat!

Love Goes to Press is an entertaining little show, but I have to admit that I basically just didn't "get it".  I'm reminded of seeing an August Wilson play (Jitney) down at the Two River Theatre Company in Red Bank, NJ several months ago - before I started writing these little reflections - and I had a similar reaction to it.  Both shows were enjoyable, and well-executed, but I didn't really see the point behind them.  There wasn't much in the way of character or story development.  There seems to be this genre of play writing that mostly exists as a snapshot of a moment in time.  It isn't driven so much by the plot or the characters, but just as a look inside another world.  And while I enjoyed both of these theater experiences, something seemed missing from the experience.  Part of my frustration probably stems from the fact that in both of these shows, there are opportunities to explore real big social issues: race and gender inequality.  The "snapshot" approach to a play leaves these concepts largely unexplored.  It serves a purpose in that it gives a bit of insight into a too-often hidden part of the world, but it doesn't really seem to delve into those insights or those worldviews.  So I go away feeling a little cheated.  Cheated out of having had the chance to have grown through the perspective of the playwright.

Love Goes to Press was well-executed, but no one really stood out for me.  There were a couple of times when I was a bit puzzled by the staging - namely one particular scene near the end when one of the character was speaking forcefully to two different characters in a back-and-forth manner.  The speaking character was far stage left, and both of the people she was speaking to were near each other far stage right.  It was hard to follow who she was speaking to when.  It seemed that there might have been better ways of staging that so that we of the audience could have followed along.  But that was a minor flaw, and generally it was, as I said, well executed.