More politics as usual from the "Good ol' Boys" 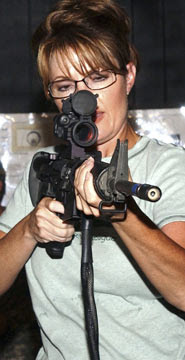 Well, my first day at General Seminary was exhausting. The before-7:00AM train into the city, first day of classes, and after-7:00PM train home was a lot...

I tried to watch some of the Republican Convention when I got home, but soon I was overcome and went to sleep. I had been sleeping for quite a while by the time Sarah Palin gave her speech last night.

Though of course I've had chances to hear a lot of the speech through soundbites on the news shows this morning.

Let's get something clear about Palin. She may be a woman and she may be brand new on the political scene, but she's clearly a "good ol' boy".

I am most offended by the attacks on Barack Obama's experience as a community organizer. How dare they try to portray his devotion to helping the poor and underrepresented as a weakness! John McCain and Sarah Palin want you to think they represent some kind of change, but the speech last night proves once again that it's the same old, fear-based, environment-hating (chanting "drill, baby, drill" during Rudy's speech??? really???), Rove-style politics that have so deeply injured this country over the last eight years.

"Country first"? Not with these tactics. This is all about the powerful trying to stay powerful at the expense of the weakest most vulnerable people in the country.

Anyway - the real point of this post was to pass this on to you. It's what I found in my email inbox this morning from David Plouffe, the Obama campaign manager:

Both Rudy Giuliani and Sarah Palin specifically mocked Barack's experience as a community organizer on the South Side of Chicago more than two decades ago, where he worked with people who had lost jobs and been left behind when the local steel plants closed.

Let's clarify something for them right now.

Community organizing is how ordinary people respond to out-of-touch politicians and their failed policies.

And it's no surprise that, after eight years of George Bush, millions of people have found that by coming together in their local communities they can change the course of history. That promise is what our campaign has been about from the beginning.

Throughout our history, ordinary people have made good on America's promise by organizing for change from the bottom up. Community organizing is the foundation of the civil rights movement, the women's suffrage movement, labor rights, and the 40-hour workweek. And it's happening today in church basements and community centers and living rooms across America.

Meanwhile, we still haven't gotten a single idea during the entire Republican convention about the economy and how to lift a middle class so harmed by the Bush-McCain policies.

It's now clear that John McCain's campaign has decided that desperate lies and personal attacks -- on Barack Obama and on you -- are the only way they can earn a third term for the Bush policies that McCain has supported more than 90 percent of the time.