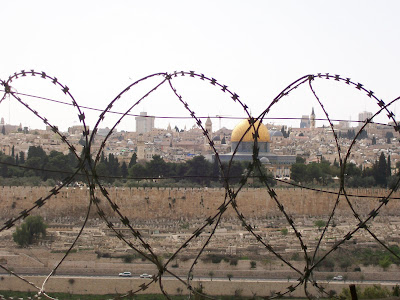 "As Jesus came near and saw the city, he wept over it, saying, 'If you, even you, had only recognized on this day the things that make for peace! But now they are hidden from your eyes.'"
Luke 19:41-42
I took this photograph in 2007 when I was visiting Jerusalem for Holy Week and Easter. It was taken on the grounds of Dominus Flevit, a Roman Catholic Church on the Mount of Olives that commemorates Jesus' weeping over Jerusalem before entering it on Palm Sunday.

The modern architecture of the church is roughly in the shape of a tear.

This photo, peering into Jerusalem from Dominus Flevit (which means "the Lord Wept") through the all-too-common razor wire in a city that has known centuries of weeping, helped to capture for me, in a way that my words at the time could not, the sadness of that part of the world that must still deeply grieve the heart of Christ.

Jerusalem can seem painfully sad. The landscape is scarred by cement and stone walls meant to exclude one people from another. Windows and doors on apartment buildings and college dormitories are fitted with armored covers to protect the inhabitants from unpredictable outbreaks of war. Religious ceremonies are guarded by teenagers carrying automatic rifles. The infighting among religious groups vying for space is held perilously in check by a centuries-old document called the Status Quo (honest-to-God!). The only chance for keeping any remote semblance of a tenuous peace is upholding the Status Quo and abiding by the rulings of long ago.

Even the Old City itself is a collection of subtle divisions: you may enter in Palestine, but after walking a few blocks you may find yourself in Israel. A few blocks more and you may find yourself in Armenia or Rome or Greece. They are divisions that most tourists would never recognize - at least not until having crossed them - but the people who know the city know their place within it and rarely stray.

My experiences in Jerusalem were profoundly life-changing and life-giving. I would never exchange them for anything.

But, at least in part, I feel like I know why Jesus wept that Palm Sunday so long ago.

I have wept over Jerusalem, too.

Whenever the people of God are torn by division and infighting, I believe that it grieves the heart of God.

Whenever we build walls that are meant to exclude, I believe that Jesus weeps again.

Today, the Episcopal Diocese of Fort Worth - a diocese that has long held fast to its walls to hold out women, and gay and lesbian people and their allies, and any other progressive or nontraditional voices that may have dared to attempt entry - today they voted to "leave" the Episcopal Church.

My purpose, instead, is to notice that once again, the church has grieved the heart of God.

For more news on the matter, I refer you to the blog of my friend Katie Sherrod. Not only is she one of the true prophets of the church and a progressive voice on the ground in Fort Worth, but she's a rock star writer and can really capture the heart of most matters she approaches with subtlety, grace, and wit.

And while you're at it, say a prayer for Katie. Because while I'm sure that she's not one bit surprised, I have no doubt but that she's grieving for our church, too.
reflections